New Horror on DVD this Week: After Dark Horrorfest III and much, much more... 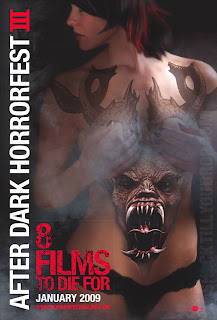 If you remember, there was something wrong with Amazon last week that was pissing me off and they weren't breaking out the upcoming releases, so I couldn't effectively put together my Monday morning post. Well, I had some fairly painful, useless back and forth with them, as they never actually saw what I was seeing, but all appears to be fixed this week... and what a week it is! There's piles of horror out. Most notably, all the After Dark Horrorfest films are out, but there's much, much more than that. I'm not going to be able to go into too much depth on anything, but I will get through everything here. As usual, if the title's highlighted, you can click on it and go to it's page on Amazon. Also, you can head on over to our Youtube page where you can see all the trailers... and make sure you do, there's some good ones this week.

As you know, the After Dark Horrorfest is an annual festival that features 8 indie horror films and they get screened nationally. January 9th through 15th, 2009 marked the dates for HorrorFest III, which included the films: "Autopsy", "The Broken", "Butterfly Effect: Revelation", "Dying Breed", "From Within", "Perkins 14", "Slaughter" and "Voices". So, you can now buy them individually, or get them as a whole set

. Public sentiment has "Autopsy", "The Broken" and "Butterfly Effect: Revelations" as the best of the bunch. Also of note is the fact that "Slaughter" and "Perkins' 14" are the first films that After Dark has actually produced and released themselves... I'd love to talk about the writers and directors of each of them, but I don't have time. So, here's some brief synopsis' of the films:

- A young woman is surprised to see what looks like herself, drive by one day. She follows the woman, which sets off a chain of events which leads her into a haunting, nightmare reality.

- A young woman returns to her family farm in the hope of escaping an abusive situation. Unfortunately, this safe place ends up being much more abusive than her previous one.

- Robert Perkins brainwashes 14 people, in order to create an army that will defend him from his parents' killers.

- A young man with the power of time-travel attempts to solve the mystery of his girlfriend's death. In doing this, however, he frees a vindictive serial killer.

- The residents of a small town in the USA begin to die off, supposedly of suicides.

- A young woman attempts to find her injured boyfriend in a bizarre hospital.

- Zoology student Nina and her friends go into the Tasmanian Forest in search of the Tasmanian Tiger. What they discover, however, is a cannibalistic clan who are the descendants of a famous escaped serial killer known as The Pieman.

Now, on to the 'non-After Dark Filmfest films'...

", or "Cronocrimenes" in it's native Spain, is a sci-fi horror that came out in 2007, written and directed by Nacho Vigalondo. It screened at various festivals and won a bunch of awards and, to be honest, I think it looks f'ing awesome. So, Hector's on his lawn chair, hanging out, when he sees what looks like a naked girl in the trees. Naturally, he hikes up to see what's going on, but gets attacked by a dude in a grotesque, pink head bandage. He takes refuge in a lab up there, then hides in a strange contraption and, moments later, he emerges... only to find that it's hours earlier and, well... check out the trailer, they reveal part of the plot. Love it.

" is loosely based on the H.P. Lovecraft short story "The Shadow Over Innsmouth", although it moves the story from New England to the Pacific NorthWest and makes the protagonist gay. In spite of the fact that Tori Spelling is in the film, it was actually nominated for a producers award at the Independent Spirit Awards. It's about a guy who returns to the Oregon coast to execute his late mother's estate, but discovers that his father's New Age cult may have a bit of a dangerous and apocalyptic significance.

" is based on Edgar Allan Poe's story of the same name, where a lavish masquerade party takes a terrifying turn when a masked killer crashes the party.

"Isle of the Damned

" gets officially released today, click HERE to read the interview that we did with director Mark Colegrove. Great indie flick, read our post.

"Xombie" is a series of Flash cartoons produced by James Farr and it tells the story of a little girl named Zoe, who washes ashore several decades after a zombie plague has wiped out most life on earth and replaced it with bloodthirsty, reanimated versions of the planet's earlier inhabitants. A xobmie is a 'variant' who's retained their conscious mind and the ability to think like a human... Dirge, a xombie, takes it upon himself to begin a journey to reunite Zoe with the few remaining live humans and save her from a gruesome death. "Xombie: Dead on Arrival

" is, basically, the entire flash series on DVD.

" stars the burlesque performer Dita Von Teese and it's a hallucinatory tale of sex, drugs, fratricide and planetary apocalypse. Ummm... I think there's going to be a lot of surreal nudity in this one... just a guess.

" is, well, exactly what you think it is. It's a Japanese comedy/horror zombie film. Basically, two Japanese friends accidentally kill their boss, dump his remains in Black Fuji, a mountain/landfill hybrid. The chemicals in the landfill mix with the corpse and give rise to a zombie infestation in Tokyo. Oh yeah, and the guys fight zombies with jujitsu. Not swords, not guns, but face-smashing jujitsu.

"... or is it that he continues his contract with the Sci-Fi channel? In any case, this film was on the Sci-Fi channel and it follows a group of teens who stumble upon a small, ageless village that made a pact with the Ogre on the mountain in exchange for being free of disease and having an abundance of harvest. The pact? An annual human offering... and the locals are looking for their next sacrifice.

Timo Rose is one unique fella... he's a German horror and sci-fi filmmakers, a rapper and the founder of the production company 'Sword of Independence Filmworks'. Well, you can now get your hands on "Timo Rose's BEAST

", which is about a young man with werewolf-like tendencies that returns to his estranged family where his life intersects with another werewolf, two befuddled werewolf hunters and two Euro-trash criminals.

Calling all Troma fans... this week you get both "The Best of Tromadance Film Festival, Vol. 5

" and "Poultrygeist: Night of the Chicken Dead: 2-Disc Special Egg-Dition!

". I'd particularly recommend "The Best of Tromadance Film Festival", it's a good look at what goes on there.

Aside from all that, there's some notable rereleases, including Lucio Fulci's "Cat in the Brain

" from 1973, which is called the mother of all 'dwarfsploitation' films and is over the top with nudity, sex and disturbing images; "The Escapees

" from 1981, which is a Jean Rollin film and a rare release that marks the film's DVD debut; "The Cremator

" from 1968, which is classic Czech New Wave horror and won awards at the 1972 Sitges Film Festival and, finally, there's "Terror Circus

" from 1973, which is a sleazy relic from Alan Rudolph, most notably the longtime AD to Robert Altman.