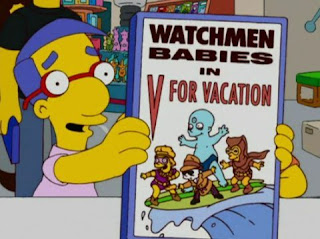 It's Friday and Brad's really nerding out over "Watchmen", which opens today. I think it's going to be interesting to see how this does. There's been numerous attempts to make this film and there's also been various screenplays roaming around. Most famously, Terry Gilliam was attached to direct and Charles McKeown to write for Warner Bros around a decade ago. In any case, "300"'s Zack Snyder did this version and, as you'd expect, he's apparently very faithful to the original comic. He used the comic as the storyboard, but extended fight scenes and added a subplot about energy resources. Long and short, the fanboys will dig this one... which could be the films downfall, as some are saying that it's a bit too complicated for people who haven't read the comic. Anyhow, it should be awesome... and it should have a big, big opening weekend. Whether or not it gets sticky like "300", is another issue.

Now, on to some news on the festival fronts...

Dark Carnival takes place in Bloomington, Indiana and they try to screen the best indie horror films from all over the world in the best possible venues, including a vintage drive-in and an historical 40's era theater. They're now accepting submissions and the dates have been set for 2009, which are September 28 - October 4. The big, and really cool, news is that they've just added a new screenplay competition and the winner will have their short screenplay (15 mins or less) produced into a movie that will premiere at the 2010 Dark Carnival Film Fest... I also like the fact that they support other festivals, as they're taking their show on the road, visiting horror conventions all over the Midwest. Next, they'll be setting up a booth at...

Horror Hound Weekend is March 27 - 29 at the Indianapolis Marriot East! Brought to you by Bloody-Disgusting and Re-Evolution and they've got a helluva line-up. First up, you get Derek Mears, who's the new Jason. By the way, did you hear they're already planning to make a sequel to the remake? Did I already mention that in another post? Anyhow, you also get Doug "Pinhead" Bradley, Bill "Chop Top" Moseley, Tom Savini and, uh... Corey Haim. Actually, Clint Howard will be there, too, and, God bless that guy. He's the shit, plain and simple... a few years back, he was making some awesome low-budget horror films, like "Ice Cream Man", "Leprechaun 2" and "Infested". I'm a big fan. There's lots of other guys going, too... looks like a good convention.

Lastly, one of the big festivals of the year is now open for entries. The Toronto After Dark Festival, which will be August 14 to 21, 2009, is a critically acclaimed, week-long showcase of "thrilling international cinema". Features After Dark is the core of the festival, which is a collection of exciting new feature-length films. That's not to say that they only accept features, they also accept shorts. Last year, they had sell-out screenings of "Let The Right One In", "Repo! The Genetic Opera" and "Tokyo Gore Police", but they also do tons of indie stuff. It's a good festival, both to attend and to submit to.

Have a good weekend! Go get drunk and check out "Watchmen"
Posted by Dead Harvey at 9:15 AM