New Horror out on DVD this week: A Handful Of Guts and a beef with Amazon 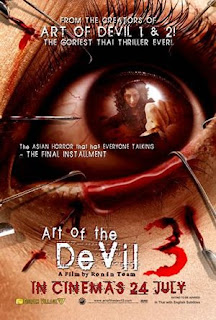 I don't know what the hell is going on, but it looks like Amazon.com has made some minor changes. I don't know what they are, but they're fucking me up. Everything looks the same, tabs are similar. However, when I click on movies, then go to the 'new releases' tab, I only get the new releases from March 3rd and 10th. You used to be able to see EVERY week; past, present and future. I was on there for around half an hour, trying to find out about the upcoming releases on March 24th, but... nope. Nothing doing. Now, maybe I'm stupid or something, but how could you purposefully exclude that feature? Isn't that fairly important? Don't people want to know what's coming out 'next week'? If not, maybe someone could've let me in on it because I talk about what's coming up next week, EVERY MONDAY. Anyhow, I had to root around on the web, going site to site and find a handful of releases that are coming out... or, I should say, that I THINK are coming out. I mean, I know there's nothing big coming out this week, but all I could find were these four films. I'm not sure if I'll be able to find trailers and I'm not sure if they're available on Amazon, so... here's a link to our youtube page where you MIGHT be able to find the trailers and if the titles look clickable, you can go to their Amazon.com page.

" appears to be the 3rd installment into the extremely gory "Art of the Devil" series, which started in 2004 with the Thai film "Khon len khong", which was directed by Tanit Jitnukul and was released with the English title, "Art of the Devil". "Long khong", directed by Pasith Buranajan and Kongkiat Khomsirir and released in 2005, which came out as "Art of the Devil 2" and that one won a couple of awards. The first "Art of the Devil" was about a girl who goes to a witch doctor to exact revenge against her ex-love and his family, but after they all die, the ex-love's secret mistress and her family starts to die, too... "Art of the Devil 2" is about the 'black arts' killing off a group of teenagers in revenge for something they did back in high school. This third installment is about a black magician who attempts to offset the toll that dark power has taken on his body by forcibly removing the power of dark deity from the bodies of other humans who have absorbed it... looks f'ing gory. Check out the trailer, found that one.

"Czech Chillers: Valerie and Her Week of Wonders/Witches' Hammer

" is a couple of old horror films out of Czechoslovakia. "Valeria and Her Week of Wonders", originally released in 1970, is from Jaromil Jires and it's inspired by fairy-tales, such as "Alice in Wonderland" and "Little Red-Riding Hood". It's a surreal tale in which love, fear, sex and religion merge into one fantastic world... it looks like one for the stoners, to be honest. I found the trailer for that one, too. "Witches' Hammer", from Otakar Vavra, is also from 1970. It's an award winning film about the medieval persecution of witches. It's actually gained a bit of cult notoriety in the whole witch genre, as there isn't many witch movies out there. So, if you're into the persecution of witches, here ya go.

Now, I'm left to guess on a DVD coming out called "Cycle". Is it the 2006 film out of the UK about a guy on a mountain bike who stalks five students, murders them and eats their brains? I'm assuming so... either way, couldn't find it on Amazon. God, I hope they put that tab back.

Lastly, it's not really horror, but "Watchmen: Tales of the Black Freighter & Under the Hood

" comes out this week. "Tales of the Black Freighter" is the comic within the comic that's featured in the original "Watchmen" series. They've turned it into an animated feature that's available on this disc. "Under the Hood" looks closer at the character arc of Adrian Veidt/Ozymandias, I believe. Also, in this set, you get a Watchmen Motion Comic Book in HD, a first look at DC University's Animated Green Lantern DVD and some additional features available in BD-Live.

So, I've sent emails to Amazon and, at this point, they don't seem to understand what I'm asking for. They've replied twice, sending me links to "Twilight". I'll keep you posted on this...
Posted by Dead Harvey at 9:15 AM

I recently came across your blog and have been reading along. I thought I would leave my first comment. I dont know what to say except that I have enjoyed reading. Nice blog. I will keep visiting this blog very often.

Thanks Ruth... glad to have you on board.