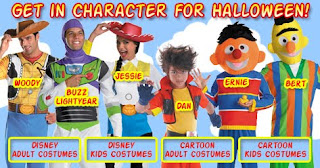 Here, at Dead Harvey, we do our best to bring you posts that are informative, educational, insightful and, in rare cases, lucrative... or, should I say, potentially lucrative. Today, for the first time, we'll be bringing you a post that is all of the above.

Today, we're going to talk with Mike Cairl, the president of Star Costumes. You can find them on the web here. They're one of the biggest online retailers of costumes, masks, props, make-up and supplies... and they're offering YOU a chance at a horror scholarship. Read on to find out more about the scholarship and what Star Costumes is all about...

Tell us a bit about this scholarship. Who’s eligible, who should apply and why?

The Star Costumes Horror Scholarship is open to anyone 18 or older who's studying full-time to work in the horror industry (see our site for more details). They could studying to be a special effects makeup artist, costume designer, screenwriter, director, or just about any other job related to horror cinema. What's important to us is that the student can demonstrate (via their essay) a passion for horror and show us they have the potential to make an interesting contribution to the field.

Will you be offering this scholarship every year?

We've been really excited about the response we've received so far, and plan to offer the scholarship again in 2011. It's a bit tough to predict at this point, but we hope to make the scholarship a regular thing.

What made you decide to do a scholarship? And why a horror scholarship, in particular?

We've been planning to set up a scholarship program for awhile, and horror seemed like a natural fit. As far as we know, there's never been a scholarship designed specifically for students who want to work in the horror industry, even though horror cinema is a huge business.

Costuming is a very cinema-focused industry -- the hot movie that year tends to determine the most popular costumes, and characters from that year's top horror flicks have always been a big seller for us. So it really benefits us as a company to encourage the creation of great horror movies.

Tell us about Star Costumes.

Star Costumes is based in Toledo, Ohio, and has been selling costumes since 1980, and online since 1997. That makes us one of the oldest costume sites online.

What kinds of things do you sell that horror filmmakers may be interested in?

Out of interest, what are your top selling costumes or items and why do you think that is?

As mentioned, the top movies that year tend to drive the costumes people are looking for. This year, our Deluxe Predator Mask has been popular, since the movie Predators came out not too far back. Clive Barker also recently launched his own line of Halloween masks and costumes called Dark Bazaar that we expect to be popular.

You, obviously, see the horror industry from a different angle. Talk about what you think makes a good horror character.

As a costume company, we love to see really defined characters -- both in appearance and personality. Freddy Krueger, Jason Voorhees, Michael Myers, Leatherface, Jigsaw, Pinhead -- those are all perennial best sellers in the costume industry. Great characters don't always equal great films, but it does mean a lot of people will want to dress up as them.

Do you have any favorite horror films?

I actually lean towards movies that use a strong story and a sense of ambiance and tension/resolution to achieve their desired effect, as opposed to the more hard-core gore-nography that's also popular. I really liked Paranormal Activity recently, and the original Japanese version of Ju-On scared the wits out of me. Sometimes, what you don't see is actually a lot scarier than blood spilling everywhere.
Posted by Dead Harvey at 8:34 AM