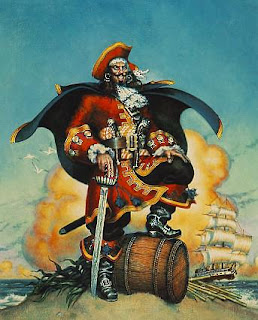 I'm just wondering where all of you stand on the whole piracy issue that's plaguing Hollywood these days. Here's a short piece that I read on Cynoposis Digital this morning that got me thinking...

In one of the biggest anti-piracy efforts yet leveled at individual users, the producers of Oscar winner "The Hurt Locker" are laying down a legal gauntlet for illegal file sharers, seeking damages against 5,000 people in U.S. District Court in Washington D.C. Voltage Pictures feels as though the movie's popularity on P2P sharing sites - it was uploaded some 6 months before its official U.S. release - has severely hampered its sales at the Box Office. The movie has grossed less than $17 million despite winning 6 Academy Awards including Best Picture and Best Director for helmer Kathryn Bigelow. The lawsuit lists the defendants by their internet Protocol (IP) addresses, with lawyers planning to subpoena individual ISPs to identify the offenders. Individual users will be asked to pay $1,500 each to be released from their liability.

Now, I've never made/produced/created/shit-out a piece of content that's made any significant amount of money and, if I did, I may change my tune, but as of now, I'm of the "information wants to be free" train of thought. Growing up, I had a dark room in my basement, we had film editing equipment and later on we had one of the first VCR's and camcorders... and I don't want to know how many copyrights I've infringed on. And it never stopped. I use the torrent sites regularly, mostly in place of a DVR to find TV shows that I've missed or to get stuff that's not available to me here... and I don't lose sleep over it. In fact, I've preached that indie filmmakers should consider putting their films out there themselves. Why not? If it gets your film out there, finds an audience and gets you noticed, isn't that what you want? I can see why the studios hate it, but isn't this something that's existed since the dawn of time? Really, from sneaking into movie theaters to pirating workprints, it's all the same. Someone's trying to see something for free. It's part of the game. Could you imaging suing someone $1,500 for sneaking into a theater? No... but that's sort of what they're doing here.

The other problem I have is, no one has ever been able to link piracy to a lack of box office revenue. You can claim that it only grossed $17Million dollars despite winning all those awards, but... it's still a war movie and war movies have done terrible over the last few years. You can't just compare it to "Slumdog Millionaire" or "No Country for Old Men" because they're all best picture winners, you need to go apples to apples. How did Iraq war movies do? "Green Zone" had Matt Damon and did $35Million, "In the Valley of Elah" had Tommy Lee Jones, Susan Sarandon, Charlize Theron and was very critically acclaimed, it grossed under $7Million. "The Messenger", with Woody Harrelson, nominated for best screenplay, grossed a meagre $1.1Million. So, look... maybe it's not the awards, maybe it's the sub-genre you're in. Seriously, you're just looking to lay blame. Let it go. I thought this was all settled after the "X-Men Origins: Wolverine" debacle. Remember, the studio was outraged... a work-print had been lifted and pirated, the film was on the torrent sites a month before it was supposed to come out. Everyone was screaming bloody murder, then... it had a domestic gross of $180Million and people shut up. My opinion is, the bulk of the people who pirate studio films wouldn't pay to see the film anyhow. So, no loss. The only loss comes if your film sucks and these guys talk shit about it. "The Hurt Locker" was an awesome film and I don't really see any way that piracy could've stripped them of any significant box office revenue, but that's just me.

So, what do you think? Where do you stand? I've met people who froth at the mouth when you talk about downloading pirated films and I've met people who will do anything they can to get around paying for content... Me? I'm somewhere in between.
Posted by Dead Harvey at 10:05 AM

Stealing is against the law, fine, but trying to force each of those folks to pay an outrageous $1,500.00 each is absurd!... It's total bullshit. If you run a red light in my city, the fine is slightly over $200.00. Do the filmmakers think their movie is more valuable than a person's safety or life?... If they were trying to make these folks pay $50.00 each, then that would be far more appropriate.

I agree with everything you said in your post. It sounds as if they're trying to recoup their IMAGINARY lost income ( which they never earned in the first place ). I hope that makes sense, because I don't know if I did a good job of translating my thoughts into words.

Just for the record, I hate watching movies and tv shows on my computer ( they're NO match for a widescreen tv and a comfortabble chair, lol ).

What you said makes total sense and you're right, $1,500 is absurd when you compare it to other fines. Not only that, running a red light is something tangible. How could you put a value on pirating a low-quality version of a film that you otherwise would never have paid to see?

Anyhow, thanks for the kinds words about the site!

For one, piracy is not "stealing." Stealing is taking something away from someone, so that they no longer have it. Piracy is copyright violation, which is vastly different. I think the ridiculous RIAA started incorrectly using "stealing" to gain public support.

If you can download media, you now have the power to choose whether or not you want to:
1. Monetarily support the product based upon your definition of its entertainment value
2. Purchase repeated copies due to loss or breakage
3. Get the one part you would normally need to purchase the entire product to receive (i.e. a song or single scene).

If there's an incentive to buy, people do. If there isn't, people wont. The industry has made countless millions off bad films/albums, and replacement items for decades.

Obviously I'm biased. But your point about "Don't you want people to watch your movies?" doesn't work.

I want to make money on my movies so I can then make BETTER movies with MORE money.

And unfortunately, while there's no pie chart I can show you that proves piracy is affecting the market, the distributors have gone from giving decent advances to giving NO advances. And they're quoting piracy as a major cause(which they say helped hasten the demise of Hollywood Video and now Blockbuster).

So it's definitely affecting me.

However, I'm about to shoot something on the cheap and test out the "free" market to see if we can make it work.