Box Office Review and a Good Week for Horror on DVD 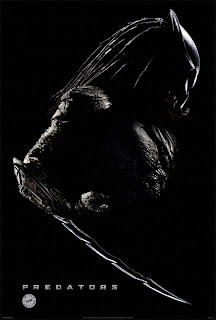 Wow, I am in no condition to be operating my computer, let alone be writing this post... I was out of town for a gong-show wedding where I drank like a sailor on his last weekend before heading out to sea, then flew back home late last night. Flight was delayed three times, finally got home at 4AM... alarm went off at 7:30. Brutal. Anyhow, I'm ridiculously tired and terribly hung-over, but I'm going to try to power my way through this.

The box office was, once again, dominated by "Toy Story 3", but that's no real surprise. "Grown Ups", the ensemble Adam Sandler flick, did as expected and came in second. Third was "Knight & Day" and the press is all saying that the Tom Cruise and Cameron Diaz film was a bit of a let down. However, I heard it was tracking really badly. So, the fact that it pulled in over $20Million isn't that bad as far as I'm concerned... having said that, I don't know the budget off hand. Further, I was talking with a few people that saw it and they said it was actually a pretty good movie. Lastly, just to add insult to injury, "Jonah Hex" had the worst week to week decline, falling 70% to just over $1.5Million - poor "Jonah Hex". As for upcoming films, we all know that "The Twilight Saga: Eclipse" has all the Twi-hards going crazy and it's going to dominate the next few weeks. However, I'm more interested to see how "The Last Airbender" does, as I really can't believe that studios still give M Night Shymalan money to make movies. Horror-wise, just around the corner, we've got "Predators" and "[Rec]2" coming out on July 9th. "Predators", the Robert Rodriguez reboot of the "Predator" franchise, is opening wide, "[Rec]2", not so much. Anyhow, on to the horror that's coming out on DVD. As usual, check out our Youtube Page to see the trailers and you can click on the titles to be taken to the films page on Amazon where you can read more and/or buy it.

Okay, (Ted's note), I've gotta whip through these because I'm fading fast and have way too much to do today, so I apologize for anything that appears cryptic or doesn't make sense...

The big release of the week is the remake of the Romero classic, "The Crazies

". Quite frankly, I thought it did the original justice. Especially considering that most people don't consider the original to be a classic. They did change a few aspects from the original, but it was really just to update it a bit. It's worth checking out, for sure.

" is a dramatic horror film from Conor McPherson, who's adapting a stage play that he did. It's dramatic, it's slow, but it is a horror. If you're used to more visceral horror, this may be a bit too slow for you.

" is actually about ten years old, but it's getting a rerelease on Blu-ray this week and it's kind of a kick ass Tokyo Shock film. Good versus evil, kung-fu, blood, guts... it's worth picking up if you haven't seen it.

If you like your vampire films mixed in with a little sexy-times, "Temptation

" is for you. I haven't seen it, but it looks like you can expect it to be a bit heavy on the lesbians and nudity, light on the gore. Not that there's anything wrong with that... nothing at all.

"A Nocturne: Night of the Vampire

" is an indie horror out of Australia, being distributed by Troma over here. I haven't seen it, but it comes from the Australian underground and it's a so-called 'goth original'. It's getting great reviews and, apparently, is shot really well and has a great look and feel for something that's shot on DV.

Lastly, I have to mention two awesome rereleases: "Teenage Hitchhikers