Interview with Greg Swinson and Ryan Thiessen, co-directors of "Five Across The Eyes" 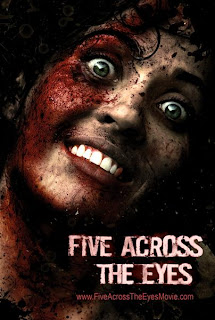 If there's one thing I could say for sure about us over here at Dead Harvey, it's that we're not timely. I don't mean that in a bad way, really... what I mean is, rarely do we have breaking news or anything like that. At the root of it all, we're really just a bunch of indie horror guys that hear about, or watch, other indie horror films and want to hear more about them and share the stories. So, in the end, we're usually the last guys to talk to filmmakers. It actually works out, if you think about it, though. They're getting continued promotion after most people don't care anymore... Anyhow, as usual, that's not my point. My point is that with much shock and amazement, I picked up the latest issue of Rue Morgue to see that "Five Across The Eyes", from co-directors Ryan Thiessen and Greg Swinson, had just been reviewed... and here, Brad's already talked with Ryan and Greg about the film! Chalk one up for Dead Harvey. And if you're keeping tally, that's Dead Harvey 1, everyone else... a whole lot more than 1.

Anyhow, "Five Across the Eyes" is getting a whole lot of buzz and it's a wicked indie horror, really well done. It's a true case study in how a low-no budget horror film should be made, marketed and distributed. It screened at a ton of festivals and has even won an award at the Southern Appalachian International Film Festival. And, like I said, Brad had the chance to ask Ryan and Greg a few questions about the film...

Tell us about your background. Where are you from and how did you get into film making?

Ryan- Greg and I are both from Tennessee and raised in the town that Evil Dead was shot in. I would have to say that I got into filmmaking back when I was about 15 years old. Greg, who had been making backyard productions for a while, asked me to come play 2-3 characters in his video adaptation of the game Mortal Kombat. I later realized that I needed to stay behind the camera, and haven’t looked back since.

Greg – Made my first short film when I was in the sixth grade and I’ve been doing in ever since.

"Five Across the Eyes" is a very unique title. Where did you come up with it?

Greg – Actually, I stole it. I heard it in the chorus of a Duskfall song and thought it was catchy, but what did it mean. I looked it up, saw that it meant ‘a slap in the face’ and I knew right then that was it. It also helped that there were five girls in the movie.

Ryan - Nope. I went to a normal college and studied Digital Media (Web Design, Digital Art, Digital Video, etc..). Then got a job doing film/video work for a media firm. Which basically meant that I got paid while I learned the ropes.

What films/directors have influenced you most and why?

Ryan - Well, for Five Across The Eyes, we looked at some of the older low budget classics like Texas Chainsaw Massacre and Evil Dead. These films were made with next to no money and still are more scary and horrific than most modern day horror films. We also looked at the TV series, The Shield. It is shot to look rough, grainy and handheld, which really puts the viewer in the action. We decided that style of shooting would really fit the FATE story, so we borrowed from it.

"Five Across the Eyes" has a very 70's look and feel to it. How did you pull it off?

Ryan - That's easy. Crappy equipment. We shot it on MiniDV and had next to no budget. We basically had to beg, borrow and steal everything we needed to shoot. So I guess we kind-of shot it like it was an old Grindhouse type movie.

What was the budget and how did you attain financing?

Ryan - We shot it for about $4,000. And to attain financing, Greg and I just pulled it out of our own pockets. 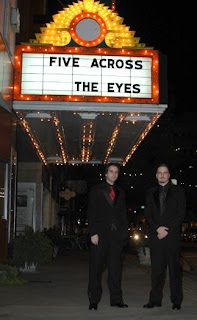 What challenges did you face during the making of this film and how did you overcome them?

Greg - Well, I'd say that $4K budget was one of the biggest challenges. We also had to shoot in the film in under 10 days. This made for a super tight schedule. The movie also all takes place in real time and at night. So, that meant that as soon as it was dark, we were out on location, shooting all night long. Then during the day, we pulled the van into a blacked out garage and continued shooting the scenes that didn't require us to see outside the van windows.

Describe your approach to directing?

Ryan - Before we start shooting, Greg and I figure out all the elements of each scene in the movie. The blocking, how the scenes are played, where the cameras are going, etc. Then when we get on set, Greg goes over the scene with the actors and gets them up to speed while I get all the technical stuff in line. We had a crew of about 3-5 people on FATE, so Greg and I had to cover a lot of duties that normally don't fall at a director's feet. For example, not only did Greg direct, but he also did all the blood and make-up. Which as the movie went on, required more and more of his time to do all the various wounds our main characters sustain.

How is the distribution going? Any tips you can give to aspiring filmmakers on getting their movies out there?

Ryan - I can't complain at all about distribution. We were very lucky to find a sales agency that really believed in our film (Imagination Worldwide, for anyone wondering). They deserve all the credit on the distribution. Not only did they get it hooked up with Anchor Bay in the US, but they also got it released in several foreign territories worldwide, including Lionsgate in the UK. I guess my only advice to other filmmakers is to try to find a good sales rep that really believes in your film. Unfortunately, I think that has to do with luck more than anything else. We found ours, or actually they found us, through MySpace. I can tell you that the market is oversaturated with the same old stuff we've seen for years. So, as a filmmaker, telling a really good and unique story can really help you when comes time to look for distribution.

Where can people find out more about, "Five Across the Eyes" and, better yet, buy themselves a copy?

Really great post/interview. I also enjoy listening to the "behind the scenes" action and what it takes just to shoot a film.

I really like scary/horror films. I love the anticipation that comes from not knowing what is coming next.

Really glad I found your site.