New Horror out on DVD this week, basically "Hellboy II"... and a few others 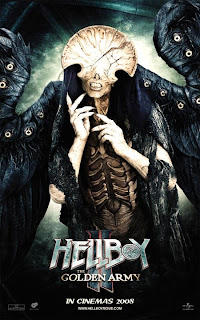 It's not the best week for horror releases, but you do get the big budget, highly anticipated, "Hellboy II: The Golden Army", from Guillermo del Toro. Quite honestly, it's the biggest release of the week, with "Star Wars: The Clone Wars" being the only other thing coming out of note. Anyhow, there are a few indie horror films to mention, as well. So, if you want to help us out and want to buy the films, please click on the titles and buy them off Amazon, through us. Also, you can go to our Youtube page and check out all the available trailers.

I'm not going to review "Hellboy II: The Golden Army

", per se, but it's definitely a must mention... I don't really want to review it because, most of the time I'm just trying to encourage people to check out indie films that they normally wouldn't see... this, you're probably going to see. As for how it did, it had a budget of $85Million and made over $150Million Worldwide, which isn't bad at all. Further, it'll make a bunch more on DVD sales and they're extending the Hellboy brand into video games and other stuff now, so it'll make more than enough dough to warrant a third one. I will offer up that I liked it... and I'm not going to say more than that. It wasn't great, it wasn't bad, but I did enjoy it. For me, it's just really cool that the original "Hellboy" was basically a dream project of Guillermo del Toro's that he managed to get made. Then, not only did it do well enough, but his other projects kicked ass and he was subsequently given artistic license to go ape-shit on this one. And that's AFTER it switched studios, which you never see happen... Anyhow, you can really see his f'ed up vision when they go down into the troll village. I think that whole scene was worth the price of admission alone, but that's just me. Anyhow, pay respect to del Toro and check out "Hellboy II", if you haven't already.

I love to see that Tony Todd is busy... and he's back, again, in "Blood Wars

", directed by Tom Shell. "Blood Wars" was originally called "The Thirst: Blood War" and, as I write this, I feel like I've seen this and/or covered it before. Maybe I just read about it somewhere, I can't remember... Anyhow, Tom Shell has had a wicked career in horror, spanning from acting in "Surf Nazis Must Die", the classic Troma film from 1987, to being a producer and production designer on various horror films over the years. You should all know who Tony Todd is, but the film also has Sean Connery's son, Jason Connery in it, as well as C Thomas Howell and a bunch of hot chicks. The film is about Will, who's a hippie college student that finds himself in the middle of a battle between vampires and a group of warlocks, but when he's bitten by a seductive vampire, he's forced to come to terms with his new state.

", which was originally called "Hallam Foe" in its native Scottland, came out in 2007 and managed to get nominated for 11 awards and win 8. It's definitely not one for the hard core horror fans, as it's got a lot of dramatic and romantic elements. I haven't seen it, probably won't, but if you care, it's about Hallam Foe, who's a 17 year old weird teenager that misses his mother, who committed suicide, drowning in a lake by their house after OD'ing on sleeping pills. Hallam goes through some weird twists and turns, then ends up becoming obsessed with a girl because of her resemblance to his mother... they start a strange romance and Hallam reaches maturity in a very hard way.

", originally called "Ghost Hunters: Point of Contact", was written by Buddy Dolan and was directed by Hank Stone and Roy Kurtluyan. Dolan is an actor, who's been in tons of TV shows, and this is his first produced screenplay. Stone is ALSO an actor, who's been in lots of stuff and you'd totally recognize him if you saw him... and this is his directorial debut. Kurtluyan spends most of his time as a cinematographer and co-directed this with Stone. The film is about a man who wakes up after 12 years only to find out that he has an unwanted ability to see the dead. It was originally shot as a 60 minute episodic, but I guess it didn't fly. I don't know.. but the producers decided to add 30 minutes of storyline to release this version as a feature.

" is a remake of the classic Mexican horror film of the same name, which came out in 1968. The original was directed by Enrique Taboada, this one is done by Gustavo Moheno. It's about a ghost that seeks revenge in a school for girls... The original has become a bit of a cult classic, although I haven't seen it. Then again, I tend to stick to movies in English. Reviews are mixed for the remake, especially from those who were fans of the original. But, whatever...

Lastly, I'll mention that Raw Feed, the Warner Premier label that does all the direct-to-DVD horror stuff for Warner Home Video is coming out with the "Raw Feed Horror Collection

", which is just a three pack that contains "Rest Stop", "Sublime" and "Believers". They're all films that have come out before and, quite frankly, they all are pretty good.
Posted by Dead Harvey at 9:10 AM