Tales From the Micro-CinemaTrenches: Eric Gosselin on Making, "Psycho Sleepover" 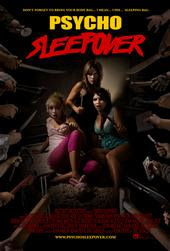 A few weeks ago I was treated to an underground screening of Eric Gosselin and Adam Deyoe's, "Psycho Sleepover". The event was in a downtown L.A. loft that looked like one of those huge apartments you see in the movies. It was also packed with booze which I certainly appreciated. More so, though, I was thoroughly impressed at just how entertaining and well cast this micro film was.

For what their budget was these guys did a stellar job with the production value, gore effects and coaxing great performances out of their actors. They also did something I appreciated even more: they kept the pacing snappy. Now, that's something that's really rare for micro. They knew exactly what kind of movie they wanted to make and scored a home run, proving that money is not the answer to making a great movie.

After watching the movie, I told Eric and Adam how impressed I was and asked if they could do a behind the scenes article on making a micro film, what kind of challenges they overcame to get it in the can, etc. Hopefully, there will be many more to follow. If you're an indie filmmaker and would like to send us an article about the making of your film please send it our way and we'll post it. Better yet, you'll become a part of dead harvey's film school archives and save people an s-ton on college tuition!

Thank's for the article, Eric! Readers, be on the lookout for Eric and Adam's upcoming work and check out their previous flicks: "Yeti: A Love Story" and "Street Team Massacre"!

BEHIND THE SCENES ON "PSYCHO SLEEPOVER"
By Eric Gosselin 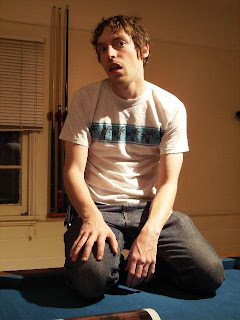 If you’re really serious about making movies and you have almost no money, be prepared to wear many hats. I’m not taking cool Samuel L. Jackson-style Kangol hats, or even a tasteful fedora. I’m taking that stupid beanie with a propeller on the top. Sorry. I’m getting a little carried away with my metaphor here. What I mean to say is you may be credited as “Writer/Director” on your movie but when you’re working for no budget that really means “Writer/Director/Craft Service/Production Designer/Production Assistant/Coffee Maker/Pizza Orderer/Punching Bag/Insomniac.”

So far my filmmaker partner Adam Deyoe and myself have made 3 features together: YETI: A LOVE STORY, released by Troma Entertainment, STREET TEAM MASSACRE, and PSYCHO SLEEPOVER. All three of our movies are no-budget horror comedies. We chose to make silly horror movies for two reasons: we love schlock cinema, and when you have no money horror is way to go. Horror always has a built in audience who are usually very forgiving of budgetary restraints.

Think about it: if someone said to you “Hey, check out this drama I made for $2,000 with all of my friends” you would probably nod politely to them and say “Sure, I’d love to watch that,” but unless their friends are Phillip Seymour Hoffman and John Malkovich, you would probably really be thinking “Oh please God, make me have a stroke so that I don’t have to suffer through the next 90 minutes of my life.”

Now what if someone (me) said to you “Check out this ridiculous horror comedy I made for $2,000. It has lots of blood and boobs in it”. You’d probably be thinking “Sign me up, handsome stranger.”

Our newest movie, PSYCHO SLEEPOVER, came about when we were finishing up the as-of-yet-unreleased STREET TEAM MASSACRE (any buyers?). We enlisted the help of friend/sexual deviant Kurt Kroeber to write up some of the ideas we were tossing around. There were many, many script revisions—probably upwards of 50. Maybe more. We all know that your script is your baby—your precious, precious baby. Well, always be thinking of ways to cut little pieces off of your baby so that your baby isn’t bloated and boring. Werner Herzog once said to me (well, he said it to a theater full of us, but it sounds cooler if I pretend he was addressing me alone) “If you bore your audience for 4 seconds you have lost everything you have built up to that point.” Nothing could be truer. You should always be revising, even well into shooting. One example of this is when part of the way into shooting our main location fell through. The people who lived in the house gave us two more days to shoot about 60 pages of script. That simply would not work. We went back to the drawing board and not only rewrote scenes to take place in different rooms that we could use other locations for, but we also added a bunch of new jokes and even an entire subplot. I guess the point of what I’m saying is: Always think on your feet and be open to changes. Nothing goes as planned. 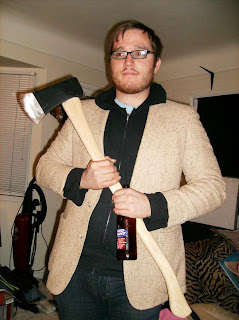 Adam and I work very quickly (a necessity we’ve come to enjoy). We don’t storyboard, and hardly ever block scenes out before hand. Usually we come onto set, one of us works with the camera people (unless we are the camera person ourselves, which happens frequently) the other works the scene through with the actors and blocks everything out. We shoot a master, figure out our coverage and move on. Our actors and us would love to have millions of dollars (hell, even hundreds of thousands) at our disposal so that we could have a bunch of rehearsals, and shoot less pages a day, but we take what we can get.

How do we keep budgets so low? We do everything we can to get everything we can for free. In college we “borrowed” cameras from the equipment house. Now we “borrow” from friends and places of employment. None of the actors are paid (except for those who contributed nudity). We even got some people you may recognize in the movie (SLEEPAWAY CAMP’s Felissa Rose, Troma’s Lloyd Kaufman, INGLORIOUS BASTARDS’ Paul Rust, and rap-star CHINGY), and they all did it out of the goodness of their generous, beautiful hearts. One necessary item is food. You have to get food for the cast and crew who are putting in long hours for your movie for no money. Our actors are all very talented individuals, and we would love to pay them, but we simply cannot afford to. Instead of money, we pay them in pizza and Cheez-its. At the end of the day none of our movies wouldn’t have been possible without the dedication of everyone involved, so we try to make it as comfortable for them as possible.

Our special effects are a bit rudimentary, sure, but they get the job done. Most of it is accomplished by running fake blood through plastic tubing hooked up to syringes for all the various blood splatters and squirts. One piece we’re particularly proud of is a cheap and safe alternative to squibs: an insecticide pump that you can buy for about $15 at Home Depot and some tubing. You take the tip off of the sprayer that controls how much liquid comes out (this way everything comes out in one blast), pump it about 40 times, attach the plastic tube to it, fill the tube with blood, press the button and voila! A giant spray of blood that can be taped under someone’s shirt, or behind their head for a nice headshot. It’s not like we’re making SAVING PRIVATE RYAN. Our violence doesn’t need to be completely realistic. In fact it adds the comedy and schlockiness if it looks a little stupid.

So to summarize: It IS possible to make a movie for little to no money. Don’t take yourself too seriously; be willing to roll with the punches and make changes. And most importantly of all, DON’T MAKE A BORING MOVIE!
Posted by mr. toad at 9:00 AM

I've never acted in a movie that was written or directed by Adam Deyoe and Eric Gosselin, but I can assure you that I know that they give their favorite actors coffee cards to starbucks and $100 gift cards to best buy.

When they gave me these things I knew I had found my favorite crew to work with. So talented.

If I had ever been in a movie they have done, I'd enjoy the $2 bill parties