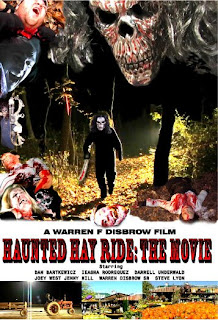 I have to say, I hate it when we talk to an indie horror filmmaker who's just made a kick ass film and then they tell us that their next film is a comedy or that they're prepping to write a drama that they hope to sell or something. Well, I guess hate is a strong word. I mean, I don't "hate" it... or them, for that matter. Hell, a lot of people need to take that route. People do need to diversify and think about their careers, I get it. However, I DO know that I love it when we talk to a filmmaker who's made a kick ass indie horror and they love, study and revel in the genre. Warren F. Disbrow is one of those filmmakers.

Disbrow has over a dozen films to his credit, he sculpts masks from classic horror films in his part time and he's met tons of his idols. He not only contributes to the genre, but he's a fan. That, I can truly appreciate. He's an asset to the indie horror world and his latest offering to the genre is "Haunted Hayride", which Brad had the chance to discuss with him...

Tell us about your background. How did you get into film making?

I fell in love with movies when I was about 5 years old when I saw CREATURE FROM THE BLACK LAGOON (1954) on TV. It was magic. Then I saw as many other horror/ sci-fi /fantasy movies as I could and I’m still fascinated by them today.

How did I start? I just bought a camera and began shooting short movies as a teenager. As I got older and more experienced the movies got longer and more polished and sold. I’ve made all my movies independently so far but every one of them got picked up for distribution and ended up right next to Hollywood movies on store shelves.

I went to Brookdale Community College in Lincroft NJ, where I learned the basics of filmmaking shooting in Super 8, and then I went to Jersey City State College, where I worked with 16mm film production. I set-up my own film production company after college. My current companies are Visual Experiences Motion Picture Company LLC and Crystal Visions Entertainment LLC.

Most of my filmmaking education was actually self-inflicted because I was obsessed about how movies were made way beyond the confines of a class room situation. When the class assignment was to shoot 2 minutes and 45 seconds of 16mm film using a Bolex RX 5, and just be able to get a properly exposed image, I’d shoot a 26 minute film with a plot instead. College became cheap equipment rental for me. That’s how John Carpenter shot his first movie DARK STAR.

What films/directors have inspired you the most and why?

Directors? Polanski, Fellini, Terence Fisher, Freddie Francis, George Waggner, James Whale, George Romero, David Cronenberg – it’s a long list. All of these people created great movies that were both exciting and highly imaginative. My dream has always been to add to what all these other filmmakers had done previously. 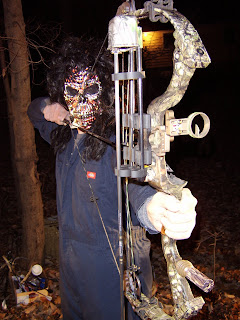 How does "Haunted Hay Ride" vary from your past work?

The other movies I made were more extreme sexually, maybe more violent, and they had more offensive social, political and religious views. That automatically reduces the size of your audience to more of a cult following. Having said that, I got incredibly positive reviews for INVASION FOR FLESH AND BLOOD and SCARLET MOON around the world and they got me in the NY Times more than once; so I guess maybe those extreme elements didn’t ultimately harm their success or my reputation because I’m being called an “auteur” and a “genius” by some critics because of those movies. But as the writer-director I find it sometimes hard to determine just how far to go with violence and eroticism.

I decided to cut back on the nudity, language and offensive content with HAUNTED HAY RIDE. It’s still a crazy, violent, fun horror movie, but within the boundaries of more mainstream acceptable limits. Fangoria promoted it on their web site and in their magazine so it’s still shocking enough for splatter fans.

The next new movie I’m filming will be THE HAUNTING OF HOLLY HOUSE in the spring of 2009. HOLLY HOUSE will be a further departure from my past movies. My hope is if I rein-in some of the more objectionable material, it will allow a larger audience to enjoy the movies I’m making. With HOLLY HOUSE I’m trying to scare people psychologically instead of just with graphic violence.

I try to plan everything out in advance in as much detail as possible, but on the set I try to remain flexible and open to any good ideas or even creative stimulus from the environment itself. My job is to get the best possible footage out of a given situation. You always have a more perfect movie in your head than reality lets you achieve. I’ve never had the chance yet to show my full potential as a writer-director because of a lack of adequate budgets. I hope that changes soon.

"Haunted Hay Ride" features a fantastic location. How did you attain in?

I normally just approach people or places and simply tell them what I’m doing and what I need and most of the time I get cooperation.

I needed a farm to cooperate with us and drove all over NJ looking for one. Ed Brock Sr and Ed Brock Jr had two very large, very beautiful farms - one in Colts Neck NJ and one in Freehold NJ and they just gave us total support. They would just let us do whatever we had to do making the movie. Occasionally they would ask us if there was anything else we needed that they could provide. It was a dream situation.

Ed Brock Jr and I are both horror movie fans and we both love rock star Alice Cooper. When Brock Jr and Sr saw the final release print on HAUNTED HAY RIDE they both were very happy with it. They are selling DVD copies of HAUNTED HAY RIDE at their farms now and they had us do signings there. Since they supplied a big part of the movie for us by allowing us to shoot at their farms, it was a relief for me personally to hear that they both liked the resulting movie. 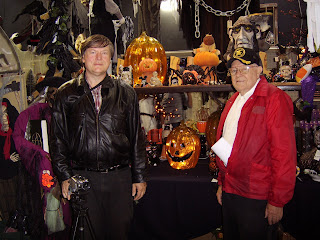 What challenges did you face while making "Haunted Hay Ride"?

Like everybody else making movies; time and money problems. First I had to start filming fast, because it was already at the end of September, and I needed to be able to take advantage of all the Halloween decorations everyone had up. I wrote the script in four days straight and we didn’t have time for re-writes before we started filming. I started shooting at Brock Farms without even a cast. We were casting while we were shooting. Somehow everything we needed to make the movie showed up when we needed it. In the end we got about 90% of the script as I had written it, added a few scenes along the way, and completed shooting in about three months from the time when I first got the idea to make the movie.

What gore effects are you most proud of and how were they accomplished?

I like the opening dismemberment. If I had to do it over again I’d have had the stump of the severed arm flailing more and more blood squirting out, but that scene was an achievement for me. We filmed it in about 8 hours. I described what had to be done to the cop in the script, but I improvised the special effects on the spot from whatever was available at the location. People scream when they see that murder, so it must work. How did we dismember actor Joe Justin? I think it’s more fun for people to guess! I will tell you it was 100% physical effects, not CGI.

How has the distribution been going with "Haunted Hay Ride"? Any tips or lessons you can pass on to those looking to get their movie out there?

My first suggestion is not to give your movie away to a distributor. Unless you get money upfront you aren’t likely to see any at all no matter what the contract says. There are a million ways to legally steal your profit participation money. In order to get paid from my movies I had to create Crystal Visions Entertainment LLC and become a distributor myself. I’ve made more money in just three weeks selling HAUNTED HAY RIDE myself than I’ve been paid from distributors who have had my other movies for years. Creative accounting will keep you in the poor house. Roger Corman was right when he said you need to eliminate as many people as possible between you and your paying customers. However it’s a tough road being a filmmaker and a distributor because both are full time jobs. When Corman tried it in the late fifties/early sixties with The Film Group he failed and ended up taking the movies he had made to AIP for them to distribute.

Where can people find out more information about "Haunted Hay Ride" and, better yet, buy themselves a copy?

Eventually you’ll be able to buy HAUNTED HAY RIDE at places like Best Buy, Borders, MTV, Tower Records, Turner Classic Movies, since they already carry my other movies. For the moment, however, since the movie was released only four weeks ago and those deals haven’t been made yet, buy it at my web site: warrenfdisbrow.com.

One more thing I’d like to add – our DVD releases via Crystal Visions Entertainment are mastered by us favoring the highest bit rate to the movie itself and then are professionally replicated by an outside company using a glass master and slick color inserts on the same high quality level as MGM, MCA, Columbia or any other major studio DVD release. They are not DVD-Rs with color laser inserts like bootlegs. The HAUNTED HAY RIDE DVD is only $16.95 plus shipping and comes with lots of extras. You can Google it to read the positive reviews. It’s a good movie.
Posted by Dead Harvey at 9:00 AM