Avatar at The Box Office and the upcoming week in horror 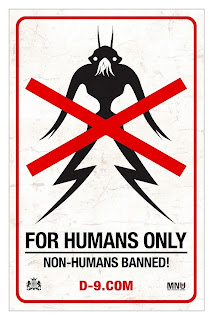 As everyone expected, "Avatar" kicked some serious ass at the box office. It pulled in around $75Million over the weekend, which makes it the highest grossing opening for a movie that's neither a sequel, a remake nor a direct adaptation... and it was also the second highest grossing December opening ever, after "I Am Legend". The untold story here is the fact that the shitty weather on the East Coast kept a lot of people at home, so the box office tally should've been a lot higher - they said that theater attendance was down 50% in the heaviest hit areas. Kinda reminds me of that "Entourage" episode when "Aquaman" opened and there was a power outage. Complete coincedence that "Aquaman" was directed by Cameron, as well? Anyhow, on Friday, I was halfway through a big post about James Cameron, "Avatar" and how I think it'll help indie film, but I never finished it. I'll change a few things and finish that up for Wednesday. As for upcoming horror on the big screen, there's finally a couple of films in sight, "Daybreakers" on January 8th and "Legion" on January 22nd. As for DVD releases, as expected, it's a shitty, shitty week... not due to the quality of the films, but because only four are coming out. However, I want to talk about "District 9", as it comes out this week, as well, so I'll add that to my list. As usual, click on the film's title and you'll be taken to the film's Amazon page, where you can read more about it and/or buy it. Also, you can go to our Youtube Page, where you'll find the trailers.

" had a budget of around $30Million, it was still, in a way, very much an indie film. First up, it was done outside of the studio system which, by definition, makes it an indie film. However, the film was shot in a pseudo-documentary style and starred non-professional actors... and it was a sci-fi film. That's a combo that you ONLY see in indie films... and usually micro-budget films. I feel that films like "District 9" are great for indie film because they attract big audiences and introduce them to a new style of filmmaking... which, in turn, should make audiences more accepting of that no-budget style. In any case, I found the film to be fairly revolutionary and if you haven't seen it, you should. Very entertaining, at least.

" is the biggest budget horror DVD of the week, which isn't saying much because by most other people's standards, it would be called a low-budget film. "Shattered Lives" is another entry into the ever growing horror sub-genre, the kiddie-killer, which has been fairly big this year. From what I can tell, a bunch of creepy clowns start telling this little girl to start killing people. Reviews are generally good and the clowns look great... not sure I like the voice over work they did for them, though. A little overdone. Expect a big twist ending here, too...

" is shot like a rockumentary, so there's interviews and 'back stage' footage, as it follows the story of shock-rocker Erika Spawn. Really, this pseudo-documentary style is starting to become a staple for indie film. Why? Because it justifies the medium and the low-budget. Personally, I love it... as the more and more audiences accept it, the more doors will open for indie filmmakers - it's such a versatile filmmaking style. Anyhow, I digress... Erika Spawn gains infamy after her music is linked to real-life murders and atrocities... and the film follows her through a bunch of bizarre, bloody incidents and uncovers the creepy and violent truth behind her.

" is directed by Clay Liford and, quite frankly, it looks awesome. It's a low-budget horror anthology, but it looks like he switches from horror-comedy to straight horror to artsy, black and white horror. If you head over to our Youtube page, we've posted the trailer that he put together. I can't do that any justice with written word. Go check it out, it's about 4 minutes long and definitely worth watching.

There's no trailer or anything for "Kazuo Umezz's Horror Theatre

", but I can tell you this... if you're in to Japanese horror or manga, you'll want to check this bad boy out. Kazuo Umess is the god-father of horror manga and six Japanese horror filmmakers got together to adapt his works into this horror anthology...
Posted by Dead Harvey at 9:23 AM