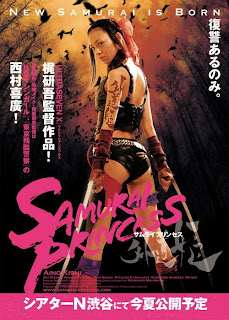 So, full disclosure on a couple things here... distributors send us films to review and this one, an Asian gore flick called "Samurai Princess", was sent to me from Well Go USA. Two, it's an Asian splatter flick and I f'ing love Asian splatter flicks. You see, usually what happens is, a distributor or filmmaker sends us a film, then we watch it and discuss it with the filmmaker and then you get those interviews that we try to regularly post. However, in the case of Kengo Kaji's "Samurai Princess", that's not going to happen. For starters, he probably lives in Hong Kong and couldn't care less to talk with us... But not only that, I'm just going to assume that there would be a bit of language barrier involved. Anyhow, the film stars a hot Asian girl by the name of Aino Kishi and it's written and directed by the afore mentioned Kengo Kaji, who's the guy who wrote "Tokyo Gore Police". If you're interested, "Tokyo Gore Police" ranks up there with "Machine Girl", as one of the best Asian films of the year... for me, anyhow.

As for "Samurai Princess", it takes place in an alternate version of a feudal Japan where people live together with highly developed mechanical dolls called mecha's... and these mecha's are killing people. Then, after a gang of rapists and murderers, well... rapes and murders a group of girls, a mad scientist goes through the carnage and creates the "Samurai Princess" from all the guts and limbs. He equips her with eleven types of built in weapons, infuses her with the souls of eleven of her fallen sisters and, shortly thereafter, she takes everyone on and kicks some serious ass. Look, the film's awesome... if you're in to excessive, over-the-top gore and can handle crazy Asian plot-lines, you should check it out. Also, I was half drunk while watching it, but it did get me thinking...

I think that it goes without saying that what Asian gore films are doing is world's apart from what North American films are doing, but I was trying to put my finger on defining what that difference is and I think I figured it out... you see, North American films are concept based. By that, I mean, the film sprouts from a generalized idea, like... this is a film based around the fact that the world may end in 2012. This is a film that deals with the gritty underground world of street racing. A hitmans daughter gets kidnapped. There's an alien invasion... this theory, of course, excludes adaptations from books and things like that, but, if you think about it, adapting a book, comic or other intellectual property is, in fact, a "concept" in itself... this film is based on the hit series of "Twilight" books... Regardless, my point is that North American films concentrate on creating a believable world in which characters can exist... and those characters and storylines become secondary. I think the Asians do it the other way... and that 'other way' is worth a look.

If you look at most Asian films, especially the gore films, surprisingly, they're very character based. In "Samurai Princess", for example, she's EXTREMELY well defined as a character... her and her sisters were raped and murdered and she was put back together as a machine, infused with the souls of her sisters, and now she's on a mission to avenge their deaths. Of course, you get the typical flash-backs, etc., as well. Now, the point is that the universe that exists around them is secondary. In fact, at times, it doesn't really make sense... and that's cool. Looking back at some of my favorite Asian films, such as "Ichi the Killer", "Machine Girl", "Tokyo Gore Police", "Suicide Club" and "Old Boy", to name a few... that idea stays true. The characters and how they interact is extremely well defined and that's where the film sprouts from, their surroundings and the world they exist in is secondary... and, sometimes, doesn't make much sense.

I'm not saying that one's better than the other. In fact, I think that a fusion of the two is probably ideal. I love high concept films and films that are based on general ideas, but I think that well defined characters and how they fit in to the plot and sub-plots is extremely important. North American horror and sci-fi filmmakers tend to spend too much time on the concept, whether it be the killer itself, the monster or the world that they're creating, and just throw in a group of teenagers as the characters and create typical storylines around them. So, when you're watching films like "Samurai Princess", enjoy the mutant mecha's, boobie hand grenades and the disgustingly excessive amount of gore... but, while you're watching those blood fountains, take a second to see how well those characters are defined and how they interact with each other, maybe you can take something away.

So, that's all we've got for this week... have a great weekend and we'll see you on Monday!
Posted by Dead Harvey at 8:45 AM