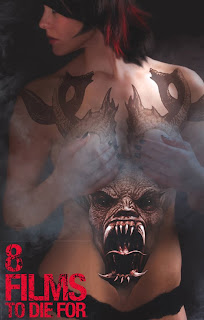 Okay, you know about Horrorfest, right? The After Dark Horrorfest? 8 Films to Die For? Well, if you don't, you should. The annual film festival has brought a ton of kick-ass horror films to the big screen for American audiences. Films such as: "The Tripper", "Penny Dreadful", "The Gravedancers", "Frontier(s)", "Nightmare Man", "Borderland", "Mulberry Street", "Autopsy", "Perkins' 14" and "Slaughter", to name just a few. Horrorfest debuted in 2006 and it's a one week national film festival that celebrates nothing but horror. In its first year, it became the first film festival to break into the top 10 at the national box office and they've currently distributed over 1.6Million DVD's. To say that they've been a driving force behind indie horror over the last four years is an understatement....

Now, they're back. On January 29th, 2010, After Dark's Horrorfest 4 hits the screens with more of the best in indie horror from around the world. What can you do to prepare? Well, there's a lot of things you can do... however, you can start by reading this exclusive interview that we did with Sara Finder, the Director of Horrorfest. She offers some great insight into how the festival works and offers up some advice for filmmakers...

First off, tell us a bit about yourself, how’d you get in to indie horror and the film scene?

Sara Finder, Director of Horrorfest, I have been marketing Horrorfest since the Horrorfest I DVD release in March 2007. I have been working in the film/tv scene since 1995 holding various positions. Inevitably my jobs led me into the indie horror world & I have never looked back.

Most of readers are well aware of Horrorfest, but for those who aren’t, tell us a bit about Horror fest. When and why did it get started?

After Dark Films, CEO Courtney Solomon had just completed his film American Haunting. Shortly after, Lions Gate sealed a deal with him to distribute his films. His search for the next film to release led him to find several worthy horror films which then developed into the creation of Horrorfest “8 Films to Die For” Horrorfestonline.com. Horrorfest is a one-week national film festival that celebrates all areas of the horror genre.

Tell us a bit about your selection process. What does it take to get picked up by Horrorfest?

We look for films in various ways, including: film festivals, submissions, referrals etc. The door is always open as to how we get our films. In regards to film selection we do not go out with a set idea of what we want to do. Every year is different, so we keep an open mind about which films will make it into our festival.

As a filmmaker, what could I do to make my film more festival friendly? Is this something that you think filmmakers should even be thinking about?

Once your film has been completed, never underestimate the power of publicity. Help spread the word about your film as much as possible.

Are there any success stories of note from Horrorfest?

There are several success stories, many of our directors were offered film projects due to the exposure of their films being released nationwide theatrically by After Dark Films. Last year we produced a few of our own films (Butterfly Effect 3, Slaughter and Perkins 14) and brought back a director who had his film in a previous Horrorfest – Craig Singer director of Dark Ride & Perkins 14. We spotlight the indie filmmakers in ways they would not receive if their films went straight to DVD. This exposure is extremely valuable and can definitely get them to their next film opportunity.

So, as a fan… what can we expect out this Horrorfest this year?

Horrorfest 4 will be an incredible festival. So far we have announced the below & two more films will be announced shortly. Make sure you check out Horrorfestonline.com for more information on each of the films including stills & trailers. We are updating the site with new goodies frequently.

Dread
Dread, the second in the Book of Blood franchise is a stylish horror/thriller about three college students working on a documentary for school focusing on what others dread in life.

Hidden
Painful memories arise when Kai Koss goes back to his childhood home after 19 years and inherits his dead mother's house.

Lake Mungo
Sixteen-year-old Alice Palmer drowns while swimming in the dam. After her burial, her grieving family experiences a series of paranormal disturbances in their home

The Graves
Two inseparable sister's visit to a remote mine town turns into a mind-bending fight for survival against menaces both human and supernatural.

ZMD
Life is wonderful for the people in the quiet, island town of Port Gamble....until a zombie virus outbreak!

The Final
A group of high school outcasts takes revenge on the classmates who tormented torment them.

Tell us about the future of indie horror, where’s it at now and where do you see it going?

Indie horror is alive and thriving. I see the future as one where filmmakers have more opportunities to create & make the films they dream of.

What’s next for you and Horrorfest?

Horrorfest 4 coming this January 29th is keeping me busy and will all the way until its March DVD release. Then we start all over again creating and bringing the fans more horror films they truly want to see on the big screen.

Where can people find out more about Horrorfest and how can they support it?