"Run Bitch Run" and other new horror out on DVD this week... 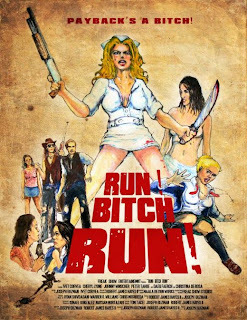 I guess everyone that wanted to see "New Moon" already saw "New Moon", as "The Blind Side" overtook it at the box office this weekend, but really only because it slipped the least. Also, the new releases didn't exactly catch on fire... "Brothers" fared best, coming in third and grossing close to $10Million. "Armored" came in sixth with just over $6Million and "Everybody's Fine" came in tenth with just over $4Million. Having said that, those three films were all relatively low-budget for Hollywood, costing somewhere around $20 to $25 Million each. Things heat up a bit next week, as "Invictus" comes out... then, the following week, comes the 800 lbs gorilla, "Avatar". As for the week in horror DVD's, it's a bit slow, I've gotta say... although there are a couple of great looking indie films in here. As usual, you can click on the titles and go to their Amazon page, where you can read more and/or buy them... and you can head over to our Youtube page by clicking here and check out all the trailers.

" is my pick of the week and it's written and directed by Joseph Guzman and it's his feature debut, although he's been involved in many other projects in various roles. It's a straight throwback to "I Spit on Your Grave" and like-minded 70's grindhouse fare, but it really amps up the exploitation to eleven... as well as the nudity... and the rape. The trailer is just downright awesome and you have to check it out.

Hey, if you've got Joe Estevez on board, we're on board... and John Sjogren got him for his film, "The Lights

", and that means we're going to check it out. It's about four friends who set out on a road trip to catch a better view of a once-in-a-lifetime meteor shower, but end up in a cat and mouse game in backwater Texas.

" involves a complete who's who of ex sci-fi D-listers and has-beens and I can't wait to watch it. Written by, and starring, Walter Koenig (Star Trek's Chekov), it stars his own son Andrew Koenig - Growing Pains' Boner (I never made the connection), Alan Ruck - Ferris Bueller's Day Off's Cameron and a long, long list of people that were involved in Star Trek in various capacities. It's about a MAN who gives birth to an alien baby and, I think, raises it as his son... I swear, you need to watch the trailer. Wow... could be a gem.

". I can not, with a good conscience, recommend these films... but the trailer's were just unreal. If you want to see how NOT to make a trailer, go check out the one for "Cuidado Con El Angel"... it's six minutes long, has spelling mistakes in the subtitles, shows lots of useless, boring shots and the voice over is as bad as you can get.

" coming out, so if you're into Takashi Miike or just dig messed up Asian flicks, you'll want to pick this up. I don't think it's Miike's best, but it is good and I'm a big Miike fan.

Lastly, there's a pile of Blu-ray rereleases coming out, including: The Kim Basinger vehicle, "While She Was Out

"; the underrated "The Alphabet Killer

"; indie favorite "Behind the Mask: The Rise of Leslie Vernon

" and "Sands of Oblivion

I wonder if all our readers are this articulate...