New Horror Out On DVD This Week (Today) 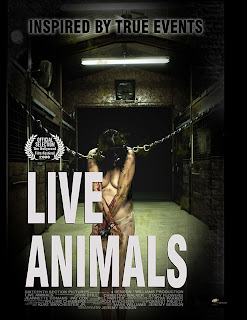 A lot of good things come out of long weekends... like, an extra night of boozing, catching up on some horror, working on those 'works in progress'. Bad things? Tuesdays that feel like Mondays - straight up, they kinda suck. I'm really discombobulated. Anyhow, instead of talking about the new horror that comes out on DVD this week, I can say... these come out today. There was actually quite a bit of stuff to come out this week, so I just picked what I thought would be the most interesting. You can check out the trailers on our Youtube page, which can be found by clicking here OR you can click on the title and go to its Amazon page.

I'm not sure if there's a resurgence in cyberpunk films, but I'm noticing more and more of them.... and I'm pretty happy about it. I really like the sub-genre and think we're going to see a lot more of them, especially because effects are becoming cheaper and cheaper to do. I recently saw "Eden's Log", which was a damn good film - I highly recommend it. Now, after seeing the trailer, I'm going to have to check out "Sleep Dealer

", which is released today on DVD and Blu-ray. I remember hearing about it a year or so ago, but then nothing. While I was hearing nothing, it went on to win the Waldo Salt Screenwriting Award and the Alfred P. Sloan Prize at the 2008 Sundance Film Festival. It's a Spanish/American film, all in English, I believe, and it's about a militarized world marked by closed borders, virtual labor and a global digital network that joins minds and experiences. Trailer looks wicked, check it out.

", directed by Jeremy Benson, appears to be "Saw" meets "Hostel" with a bit of Stockholm Syndrome mixed in. It's a low-budget horror, but judging from the trailer and what I've read, the acting looks good, it has a good look and feel and it could be quite gruesome. Could be the indie pick of the week... I'm in.

" comes from Frank Nunez, written by John Fuentes and Demetrius Navarro and it's the story of a documentary film crew that crashes on a jungle island. The jungle island ends up not being the correct jungle island and this jungle starts to mess with their minds... they still try to get the doc done, even while the mysteries of the jungle begin to show themselves and death becomes a bit of a nagging problem for the team. It was tough to dig up much more about this, as it happens to share a name with a fairly well known video game... I got lazy, stopped digging.

I don't want to say too much about "Hell House: The Book of Samiel

", as I have an interview with writer/director Jason Morris coming soon... maybe tomorrow. In any case, great low-budget horror. I highly recommend it. Check it out...

" has a retro, "Happy Birthday to Me" or "April Fool's Day" kind of cover... or maybe I only think that because she has a cake and knife? Didn't "Happy Birthday to Me" just have a guy getting a shiskabob rammed down his throat? Hmmm... anyhow, this is from director Kenneth Colley and it's about Cathy and Cathy's party... and Cathy's not having a good time. A Ouija board comes out, strange things start to happen, they blame each other, joke goes to far, but... it isn't a joke at all.

Written by Andy Briggs and directed by Bill Corcoran, "Rise of the Gargoyles

" is the latest installment into RHI Entertainment and Syfy's Maneater series. It debuted on TV on August 28th and is now out on DVD a mere 2 weeks later. Just looking at the list here, up next from the Maneater series will be "Sand Serpents", about prehistoric worms.

Harper's Island: The DVD Edition comes out today, as well. I never watched the series, but it did get fairly good reviews AND did some fairly cool things, including creating "Harper's Globe", a social web series designed to complement the show. I should really check this out, as I'm really getting into TV horror. The lines are being blurred between film, television and online entertainment and I love the idea of telling horror stories in episodic form. Anyhoo...