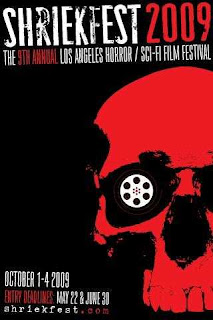 I just caught wind that Shriekfest announced its selections for the 2009 festival. Now, Shriekfest is one of our favorites of the year. If you're interested in the festival and how it works, check out the interview that we did with the festival director, Denise Gossett, you can find it here. They screen features, shorts and also do a screenwriting competition. You can see all the selections over on their site, which is at Shriekfest.com and you can also find out when you can submit for Shriekfest 2010, which may not be for a while. One reason we really like these guys is that they don't "discriminate between award-winning films and unrecognized films during its submission process (and they) aim to help filmmakers of all levels gain valuable exposure." It's true, too. They're a good group of horror fans over there...

So, here's why I think you should give a shit about this. Festivals like this are a look into what the indies are doing and where Hollywood could be going. As far as horror concerned, people have been saying that studios and execs are looking at what's popular at festivals like this, then fishing from the pond. Whether they buy up the ideas or just steal them, that's a different story. For you, the indie filmmaker, it's a good way to get a feel for trends. Like, there's only one zombie film this year... and there's a lot of dark, quirky horror/comedies. Also, the "thriller" is well represented. Hmmm... thinking about your next idea? How about you peruse the list? Maybe you'll get some ideas. So, if you're interested, you'll find brief descriptions of all the feature films that have been selected AND we put up the trailers for most of them on our Youtube page, which you can find here. If you're interested in the shorts and the screenplays, you'll have to go to the Shriekfest site.

"Dark House", directed by Darin Scott, is about a troupe of actors that get hired to play a haunted house, but soon realize that it's a true house of horrors. After seeing all the trailers, this looks like it could be the lowest budget film of the group. However, I mean that literally, so it could be the best of the bunch. The trailer sure seems intriguing.

"Dawning", directed by Gregg Holtgrewe, is shot, in part, like an observational documentary. It's about a creature that's on the loose, killing wildlife and farm animals. I think, anyhow. The trailer makes it look like they may just be going insane, turning on each other. I don't know.

"Evil Angel", directed by Richard Dutcher, is set in present day Chicago and it's about the ancient avenging demon Lilith, who wants to destroy a young paramedic's life. Decent cast, with Ving Rhames and Ava Gaudet. Not much out there on it, just a basic one page site, which you can find here.

"Evilution", directed by Chris Conlee, has already won 3 awards. It's a zombie flick about an alien bacterium that resurrects the dead and it stars Billy Morrison, the bass player for the Cult.

"How to be a Serial Killer", directed by Luke Ricci, has also already won an award. It's a dark comedy about a serial killer that recruits a pupil to teach his ways to. Looks great and the pupil is Matthew Gray Gubler from "Criminal Minds".

"Hurt", directed by Barbara Stepansky, is about a recently widowed family that's forced to move into their uncle's salvage yard. Soon after the arrival of a mysterious foster child, a family secret starts to threaten their lives.

"Lo", directed by Travis Betz, is a horror/comedy/romance about a guy who contacts the demon Lo to help him rescue his girlfriend, who's been kidnapped by other demons.

"Maneater", directed by Michael Emanuel, is about a sheriff that profiles a series of unexplained murders, only to discover that the monster he's profiling may be himself. He may, in fact, be some sort of strange werewolf, chupacabre, beast-like thing.

"No-Do", also referred to as "The Beckoning", directed by Elio Quiroga, is about a pediatrician who suffers from postpartum depression and slowly goes insane from nocturnal visits to... I don't know, the summary was too long. It's a bit confusing. Haunted house... she's been traumatized. Watch the trailer, it's on our youtube page.

"Shellter", directed by Dan Donley, is about a young woman that wakes up in a fallout shelter and is coerced into horrific acts in order to stay alive. I couldn't find the trailer on youtube, but you can see it on their site, which you can find here.

"Spike", directed by Robert Beaucage, is a monster movie. That's all I can find out right now. However, their marketing described it as "Angela Carter rewriting La Belle et la Bete as an episode of Buffy the Vampire Slayer". Oooo... Buffy. I like Buffy. Couldn't find a trailer, but there's more on their site, which you can find here.

"Surviving Evil", directed by Terence Daw and starring Billy Zane, is about a documentary crew in the Philippines that's filming a survival special. Things go bad, creatures are involved.

"Sutures", directed by Tammi Sutton, is about a mercenary surgeon and his demonic staff who go after a group of friends to sell their body parts on the black market.
Posted by Dead Harvey at 9:22 AM

I identified deadharvey.blogspot.com after previous months and I'm very excited much to commence participating. I are basically lurking for the last month but figured I would be joining and sign up.