New Horror Out On DVD This Week and a warm 'welcome back' to the NFL. 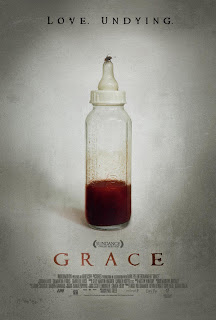 Well, horror got hammered at the box office over the weekend and not in a good way... "Sorority Row" and "Whiteout" both had very disappointing openings, grossing just over $5Million each and coming in at 5th and 6th, respectively. In fact, "The Final Destination" came in 4th, grossing more than either, although barely. Top movie of the week? "Tyler Perry's I Can Do Bad All By Myself". Did anyone see "Sorority Row" or "Whiteout"? I didn't. I kept myself busy on Saturday, as I wanted to free up my Sunday. Why? Well, it was week 1 for the NFL. And that means that Sundays are now occupied for a while, well... at least for another 16 weeks or so. Welcome back NFL.

There's actually a few quality indie horror's coming out on DVD this week, but there's tons of rereleases and Blu-rays. I'll talk about some of the notable new releases, then mention the rereleases and all that. You can check out the trailers for all the new shit by going over to our Youtube page here and you can also click on the titles to go to their pages on Amazon.

" was written and directed by Paul Solet and it's based on a short film from 2006 that featured Liza Weil and Brian Austin Green. Now, don't hold the fact that David Silver was involved against it, though... they made that short as a way to get funding for the feature, which he is not in. I recently saw the film and, well, it's interesting. Definitely worth checking out. Basically, it's about a woman who's desperate to have a child, but when her and her husband are in a car accident, the husband dies and the doctors tell her the unborn child is dead, too. However, after giving birth to what she thinks is a still born baby, it comes to life... but then develops an unhealthy smell, attracts flies and craves blood. Part "Inside", part "Basketcase", all disturbing.

I'm not sure where "Deadgirl

" screened first, but it tore through the horror festival circuit last year, getting fairly good reviews. It's written by Troma vet, Trent Haaga, and was directed by Marcel Sarmiento and Gadi Harel. It's about a couple of high school guys who discover an imprisoned woman in an abandoned mental asylum, who can't die... now, what do you think a couple of high school kids that found an undead hottie would do? Well, that's exactly what they do... and trials, tribulations and life lessons get learned along the way.

Now, for a bit of classic micro-cinema... they're rereleasing "Silo Killer

" in a double-pack with its sequel, "Silo Killer 2: The Wrath of Kyle". Now, it's not a double-pack, like you get two DVD's... they're both on the one DVD. If you're aware of "Silo Killer", it's written and directed by Bill Koning and it came out in 2002. I'm not sure if it gained 'cult classic' status, so to speak, but it's pretty f'ing close. As far as micro-cinema and the indie horror world is concerned, it's definitely a classic. You gotta check out the trailer for the sequel over on our Youtube page. Definitely a must-see. I haven't seen the sequel, so it's definitely on my list of things to watch this week.

" is based on the true story of a group of terrorists that invade a home, then attached a bomb encased in pvc-1 tubing around a mothers neck and demanded 15Million pesos. Here's the ambitious part, though. It's from Greek/Columbian writer/director Spiro Stathoulopoulos and it's filmed in one unbroken, real-time take. Amazing. All shot on DV, too. We've got the trailer on our Youtube page, check 'er out.

I don't know much about "Spirits Among Us

", but it's a micro-cinema horror from writer/director Ray Jenkins. It's 60 mins long and apparently has a bit of a Christian theme.

Also, there's Blu-ray editions of "An American Werewolf in London

" and "Army of Darkness (Screwhead Edition)

". If you didn't catch "Fear Itself" when it was on TV, you can now get "Fear Itself: The Complete First Season

". There's some other junk, too... if you want, you can peruse the new horror out by clicking here.
Posted by Dead Harvey at 9:09 AM