What Dave Mustaine Reminded Me About Indie Horror 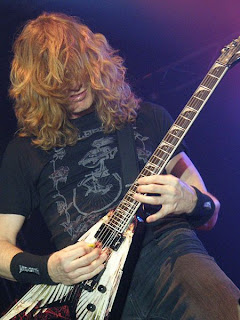 I'm not going to lie, I'm in rough shape this morning... actually, I've been in rough shape over the last couple of days, but nothing as bad as this morning. This all started when my PC blew up a few days ago. I got it working again, but now the keyboard won't work for some stupid reason, so I have to buy a new one today... which may or may not even fix the problem. So, essentially, right now my computer is completely useless and all my Dead Harvey content is on there. In response to that, I got all drunk and went to see Slayer and Megadeth last night. Now, I'm up early for a conference call that I have at 8AM and I feel like death. I should be able to fix everything and get back on track over the next few days, but... until then, I was thinking about something that Dave Mustaine said last night...

Megadeth's Dave Mustaine, who closed the show and kinda sucked, stopped to talk a bit before their final few songs (Symphony of Destruction & Holy Wars, if you're interested). At the time, I thought it was a little embarrassing when he went to thank the opening acts and forgot the name of the first band, Suicide Silence. It got a bit of a laugh and I felt a little bad for them, but it got me thinking about a conversation I had with an L.A. agent not too long ago. We were discussing how indie horror filmmakers need to think like indie bands. When you start out, you need to get your film seen anywhere you can - you just need exposure. Go to a bar and ask if you can screen it on an off night, rent out a room, whatever. Put up flyers, start a facebook page, just reach people any way you can. Make a press kit from all that and then submit to festivals. Keep on building and building. Maybe you start out with short films, as they're easier to screen and easier to get into festivals. Then take that and leverage it... keep building. The point is, at the end of the day, being able to create the product is just the start, then you have to think like that indie band and get as much exposure as you can, any way you can... which brings me back to Dave Mustaine forgetting the name of Suicide Silence.

You see, Suicide Silence shouldn't be upset. Megadeth and Slayer are like the "Friday the 13th" and "Drag Me To Hell"'s of the metal world. They're the big stage and Suicide Silence got to open for them, which would be like your short film playing before one of those films in a theater. They've already played the dive bars, they've cut low-budget demo's, they've put up flyers and played the shitty festivals and been booed off stages. On the timeline of success, they're nearing the latter stages. So, I didn't feel so bad for them... but where are you on that timeline? Sure, you can make a film, but when it's done, the work is just starting. I'm not even talking about artwork and posters, I'm talking getting into festivals, going to conventions and talking to indie horror websites and magazines. Get in touch with them all. We're always happy to help out, send me your screener and info, we'll talk about it... then, if we're lucky, I'll keep all your info in my PC, where I can't get access to it.

Point is, there's lots of people who will help you by giving you some promo. For example, check out this new site that was brought to my attention - IndependentHorrorFilms.com. I should really develop my links page, as these sites are great tools for you to use... and once it's all done, you can thank Dave Mustaine.

Damn, I need to load up on water and get through this day...
Posted by Dead Harvey at 10:15 AM