Interwebs Stuffs, including: Bloody Cannes, Livestock and other stuff... 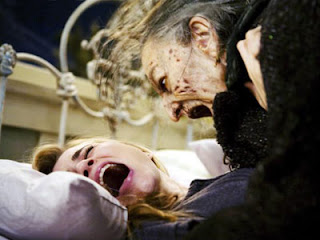 I have to take back something that I said earlier this week... I mentioned that "Drag Me To Hell" did alright at the box office on its opening weekend and that it was pretty good. Well, I'm not taking back that it was pretty good, but I'm going to have to take back the comment that it did alright at the box office. The actuals came in and it was substantially lower than the projections. Not only that, after tabulations, it slipped from third to fourth, as "Terminator Salvation" did slightly better in the actuals. Oh well, you can't take away the fact that it was actually pretty good and I still suggest you check it out. Do note that this isn't to say that the world wants less violent films, either. I've come across a few links that I want to share, but check out the first one... it may answer this very question.

The Cannes Film Festival, which was founded in 1946, is one of the world's oldest and most prestigious film festivals. Although it actually IS a festival, where films compete for the Palme d'Or, the festival has become much, much more. They have screenings, non-competitive programs, workshops, networking events, dinners, Swedish massage parties, etc... Long and short, it's one of the biggest festivals of the year... if not THE biggest. Which is why I found the article, "Cannes' red carpet is blood-soaked" from THR.com pretty interesting. By definition, indie horror has always been violent. However, it seems that violence may be 'in' these days. If you think that the festivals are leading indicators as to what kinds of films we're going to be getting in the next few years, it could be safe to say, after seeing the lineup at Cannes, that things are going to get violent.... and things getting violent usually means good things for indie horror.

Now, when it comes to the actual production phase of filmmaking and choosing which camera to shoot on, most of our readers don't really get to 'choose', per se. It's more like, what can I afford? That one? Okay... Having said that, it doesn't mean that you shouldn't be on top of what's going on in the industry. So, check out this article that I found on Indieflix.com called "The Tortoise and the Hare: Being a Filmmaker in an Ever Changing World". I don't know who wrote it, but they made a film called "April Showers", I think... and they start the article out talking about the decision to shoot in 4K, then they segue into blu-ray, DVD and online distribution. If you don't know what 4K is, it's the highest res format for shooting on digital. Not much displays 4K right now, but, to demonstrate the scale of resolution... HD TV programming broadcasts at 720P, gaming consoles and blu-ray is displayed in 1080P. Digital theaters project in 2K and, lastly, there's 4K, which you can shoot on, but no one is really projecting in or displaying currently...

Okay, now it's time to help out a friend... so, do you remember "Livestock" from Christopher DiNunzio? We interviewed him not too long ago, here's a link to the interview. In any case, his film's been accepted into the Independent Features online fest, which is pretty cool. So, click HERE to be taken to the Independent Features site. Next, click on VIEW FILMS. Then, go on the left there and click on HORROR. There, you'll find three films, "Blood River", "Blood Trail" and "Livestock". Click on "Livestock". Log in, watch it and rate it. You may have to go back to the beginning at this point, then actually register. It only takes a minute, though. Anyhow, I think if "Livestock" gets enough good ratings, he can get a screening. Something like that. It's a cool site, regardless, and you can check out a few indie films. So, go rummage around there.

We always talk about the future of distribution and how we, as indie filmmakers, can benefit from what's around the corner. Most of the problem exists in the fact that the people with money and power are making their money and power in the old system of distribution, so why would the mix it up? I mean, you or I would love to have a pile of disposable income that we could dump into a new distribution system, where we'd steal audiences from the rich and give them to the poor, right? Well, there actually are a few guys with money and power out there who believe in changing things up. Take Ted Leonsis, for example. He's a former AOL executive, who stepped down from day-to-day management and started SnagFilms, a company that aims to distribute documentary films via the internet in, what I think, is a very unique way. Check out the article on him, called "Every Blog Becomes a Cinema". I really like the idea, but I wish it wasn't just for documentaries. I think that format could work really well for indie horror, as well.
Posted by Dead Harvey at 9:00 AM