A look at: Blockbuster, Netflix, Amazon and Regal Cinemas. Why? Why not... 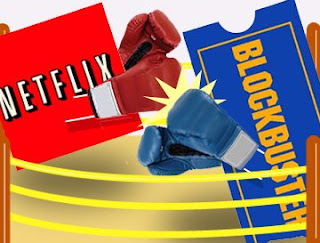 Well, I don't really know what I uncovered here. Certainly nothing earth shattering. However, as promised, I looked into the DVD rental and sales figures and compared them to theatrical release numbers. If you remember, this came up because I was commenting on how the summer is a great time for theatrical released films, but I think it's a bad time for you to release your indie horror on DVD... and, because the distributors know that, that's why we see some shitty weeks for DVD horror releases in the summer. Well, there's nothing scientific about this and I'm not sure what I revealed, but... let's look at some figures.

I'm sure there's reports and reports on reports looking into similar things, but I don't want to pay for that, nor do I have the time or effort to look into it all. So, I went the easier route. I looked into public companies. You see, public companies have to file with the SEC and all their financials are out there for everyone to see. So, I sorted through the financials on Blockbuster, Netflix, Amazon and, to compare, Regal Cinemas.

First off, Blockbuster. I figured Blockbuster would be a good, obvious starting place for rentals and their financials allowed me to look at the straight revenues that they generated from them. Know that video games would also be included here, but... like I said. Nothing scientific. So, below, are Blockbuster's revenue from base rentals, which means it doesn't include sales of previously owned DVD's, merchandise and other stuff.

If you're interested, they had revenues of $627.3Million from sales of their previously rented products, $1.4BILLION from merchandise sales and $32.7Million from other shit. There's a couple of other interesting things you should know about Blockbuster. First up, James Keyes is the CEO of Blockbuster and they hired him away from 7-11... which makes sense, since they're trying to turn the actual Blockbuster stores into more of a retail focused experience. They're also trying to take an 'anywhere and anytime' approach to rentals now. Not only will they be enhancing the in-store experience, you'll be able to get DVD's and get movies digitally, plus you'll get them from stores, in the mail, from kiosks and through your computer. Anyhow, if you look at the rental revenues there, the biggest quarter is the first, which is Jan/Feb/Mar. That makes sense. The lowest quarter is the third, which is Jul/Aug/Sep. That makes sense. I think that supports my theory that rentals are down in the summer months versus the winter months. The fact that the other two quarters are sort of in between also supports it, I think. So, there you go... but, as I bothered to look into other companies, let's look at them, too.

Okay, now on to Netflix. At first, I thought... I'll look into Blockbuster and Netflix, they both rent movies. However, Netflix works on a completely different system. They work on the subscription based method, which means that you pay a flat monthly fee and get as many movies as you want. (I think that's how it works, I'm not a subscriber) So, let's look at their straight revenues, quarter by quarter.

What's interesting here is, their revenue goes up quarter to quarter. In fact, looking back, it just keeps going up every quarter, with a few exceptions. Why? Well, it's the subscription model, just like a gym membership. If I get 100 people at X dollars per month in the first quarter, then add 20 more people at X dollars the next quarter, I've now got 120 people paying X per month, therefore more revenues. Problem with this is, what happens when you stop getting new subscribers? You stop growing. How do you keep growing? There's various ways, but... usually, lower your prices. Now, revenue drops. Anyhow, what's interesting is how steady their revenue is. That subscription model sure has something going for it.

First off, holy shit. Amazon dwarfs Blockbuster and Netflix. This is JUST North America and JUST media. Insane. Also, note their biggest quarter - the fourth. That's Oct/Nov/Dec. Guess why that's so big? Christmas. No question. It could also be due to the fact that more people are staying in and watching movies due to the bad weather, but I think it's more about Christmas. Proof may be in the fact that all the other quarters are relatively similar. Also, CD sales have something to do with it... I'm not sure how DVD's do next to CD's.

Just to compare, I decided to look into Regal Theaters, which is the biggest chain of movie theaters in North America. Here's their quarterly revenue from admissions alone. Remember, their cash cow is concessions and I'm leaving that out.

Third quarter IS their biggest, which is Jul/Aug/Sep, and that makes sense. However, quarter over quarter, they're a lot steadier than I thought. I'm not sure what that says, to be honest. This actually poses more questions than it solves answers, really. Maybe it's an 80/20 deal? Meaning that fewer movies are taking more money in the summer and more movies are splitting money over the other quarters. Therefore, individual movies make more money in the summer and everyone gets smaller pieces of cake in the other months? Who knows... I'll have to dig deeper on that, I guess.

Anyhow, let's try to wrap this up a bit. What did we learn from this? Fuck if I know. What I do know is that I'm surprised at how much money Amazon brings in. That goes to show you that the real money is in DVD releases. Adding up Netflix, Amazon and Blockbuster, you can see that it's a huge market. Way more potential money there than in theatrical releases. However, I would like to say that, although it's a little less pronounced than I thought, it IS safe to say that theatrical releases get a bump in the summer and DVD's get a bump in the winter. Point made, proven and put to bed.

Further, as an indie filmmaker, I think you can take this away... going straight to DVD is just fine. It's definitely a big enough market to get your piece of the pie.
Posted by Dead Harvey at 9:00 AM

Just wanted to add that VOD, in my opinion, is alot better for the indie filmmaker in the long run than NetFlix models, which get a small allotment of DVDs and that's it.