New Horror Out On DVD This Week: A Weak Week, But There Are Puppets 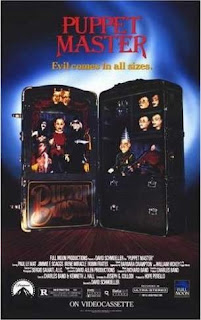 I'll tell you what... when you don't want to pay for information, it can be a little harder to get your hands on specific stats. It's a no-brainer that the summer is a huge season for theatrical releases. However, that's because school's out. That age group, call it... 10 years old to, I don't know, 20? Generally speaking, they don't work, they don't MAKE money, but they sure do know how to spend it and they've got a lot of free time on their hands. They're the ones that love going to the movies in the summer and the studios give them what they want. Big tent-pole films that cater directly to them. Now, the stats that I want to know revolve around what this means for the other end of the spectrum. I guess there's actually a variety of different spectrum's here, but what does it mean for niche, indie horror that's NOT getting a theatrical release? Well, my thought is, it can't be good. The summer is not the time to be releasing your indie horror on DVD. Now, I can't find ANY stats to support this because I don't want to spend the money on getting a report. Having said that, this is the internet and my Google skills are top-notch. So, I'm confident that I'll find something to support this and, when I do, I'll write up a post on it. In any case, it's another fairly weak week in horror releases, but I think that's because the distributors have the stats that I'm looking for. In any case, you can click on the title and be taken to its page on Amazon, where you can buy it (if you'd like) and you can also go over to our Youtube page and check out all the trailers.

", written and directed by Scott Madden, actually looks pretty darned good. Apparently it's got a little something for everyone as they seem to think it spans three genres... they call it a romantic horror comedy. However, it has a hot, ravenous vampire in it. So, I'm calling it a horror. Sorry. So, it's about said vampire and the 18 year old boy that raises her from the near dead. The vampire, played by Lourdes Colon, is, like I said, quite hot and it looks like you get to see a fair bit of her. Not only that, the gore and effects look good. Blood, vampires, nudity, gore. Sold.

" is the directorial debut from Ed Winfield and it's definitely got some budget behind it, plus a few notable actors, including: Marnette Patterson ("Starship Troopers 3", "C.S.I." and "Charmed"), Kellan Lutz (upcoming "Nightmare on Elm Street" remake, "Twilight" and the new "90210") and none other than Rowdy Roddy Piper... who needs NO introduction. Apparently based on true events, it's about a group of five who set up film equipment to capture footage of the ghost of Elisabeth Walker, a maid that was tortured and killed in the derelict town of Goldfield. I can't say much about the film, as I haven't seen it, but it was made in 2007, with what looks like a decent budget, and it JUST got released, straight to DVD. So, come to your own conclusions on the quality.

" is a Spanish film, written and produced by Benjamin Lopez, directed by Jorge Luis Urbina. This is a 'disturbing psychological action thriller' (again with the multiple genres) about the relationship that forms between a young student and the schools janitor... who the student figures out is a murderer. If you're into Spanish psychological action thrillers, could be for you. Doesn't look to bad.

Lastly, as it's a slow week, I'm going to give props to Charles Band, Full Moon and the Puppet Master Series, as the "Puppet Master Box Set

" is coming out this week. Charles Band is the brains behind Full Moon and he's produced hundreds of classics and, because of that, he ate up a large portion of my time while I went through film school... He's a director, a writer, a producer and all around good guy. However, as far as I'm concerned, if he should be remembered by ONE series of films, it's The Puppet Master Series. If you've never seen them, check them out... the films revolve around a group of puppets that were animated by an Egyptian spell. They're each equipped with their own unique and dangerous device. Each film has piles of puppets, but there are a few guys that appear more than others, such as: Blade, Jester, Pinhead, Six Shooter and Tunneler. Rumor around the campfire says that they're thinking of reviving the series, which could explain this box set release, as well as reviving various other Full Moon titles. Bring it, Charles... bring it. I'm ready to donate more of my time to puppets.
Posted by Dead Harvey at 9:05 AM