Putting Together Your Movie Poster 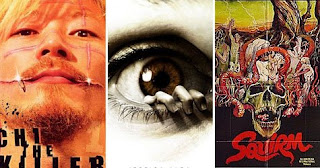 One of the new things that I want to do around here is make my posts quicker and more concise. The reason is twofold. One, it's easier for everyone involved - it saves me a bit of time and allows me to work on the guts of the site more, as well as giving me more time to work on our other projects. So, win/win there. The better the site guts, the better the resource for you. The other reason is, through analytics, I realized that the average time on the site is around 3 minutes. There's no way that you're reading my entire posts in three minutes. So, from now on, I'm going to write 3 minute posts.

Anyhow, as you know, getting your film made is only half the battle. It's probably the toughest and most expensive battle, but once it's over, there's a shit-ton of work to be done. One of the main things that people overlook is that you're going to want to make everything as pretty as possible. It REALLY helps with the distributors, festivals, etc. There's lots of different things you need - a press kit, some stills, kitchy crap, but, and most importantly, you're going to need good artwork. No offense, but a lot of people do a piss-poor job on this and I've seen it firsthand... and what you're really doing is selling yourself short. I'm not saying you should emulate Hollywood and make your micro-cinema film look like something it's not... but you should put together something that does your film justice. Go on to Amazon.com or any site that sells indie horror and check out the artwork. However, duly note that a lot of distributors pay to have artwork done for the films that they pick up (and they take it out of the filmmakers share of the revenue). So, if you're distributing independently, check out what other people are doing and try to do something similar.

If you're an indie filmmaker, chances are you know your way around photoshop or similar programs, so you should be able to put something together with a bit of work. Check out this article, "The Anatomy of a Movie Poster", which can be found here. It's some pretty cool insight on how a movie poster is made...
Posted by Dead Harvey at 9:00 AM

Yes nice and short I read the whole thing!