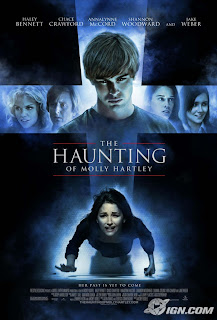 I just want to say it's a shame that Sean Penn won best actor last night over Mickey Rourke... and I can't help but think that Mickey's acceptance speech at the Spirit Awards had something to do with it - check out the video at the bottom and you'll see what I mean. Anyhow, lots of movies out this week and I don't have much time, so lets get to them. As usual, you can click on the titles to go to their page on Amazon and you can go to our Youtube page to see all the trailers.

" did get a theatrical release, although I don't really remember it coming out. It's written by John Travis and Rebecca Sonnenshine and was directed by Mickey Liddell... Lidell's served as a producer on various projects and this is his directorial debut. The film has striking similarities to the 1976 film, "To the Devil a Daughter", as it's about parents who make a pact with the devil to save their child after the mother had a miscarriage. The film focuses on the child, Molly, and her stresses of being a new student and recurring nightmares of when her Mom tried to kill her... but she later figures out that her mother was just trying to save her from her preordained life as a servant of the devil.

I wasn't exactly sure why Mickey Rourke had such a hard-on for Eric Roberts in his Spirit Awards speech (once again, scroll to the bottom to see the speech) and it's with much coincidence that an Eric Roberts film, "Cyclops

", comes out this week. So, if you don't know who Eric Roberts is, he's Julia Roberts' brother... but, he also had a good career going, having been nominated for Academy Awards and Golden Globes in the late 70's and early 80's with movies like "Runaway Train" and "King of the Gypsies". Then, something happened... and he spend forever toiling in TV and B-Movies. Now, that's good for guys like us, especially if you liked movies like "Raptor", "Purgatory" or "Wolves of Wall Street". Not so good if you're Eric Roberts and your sister is Julia. Christmas must get awkward. "Hey, how was working with Clooney, Pitt and Hanks, Julia?" "Not too bad, Eric. How did the sci-fi original "Cyclops" work out for ya?" "You mean the film where play a Roman emperor and imprison a cyclops to fight people? Fuck you."

" stars Shane West and J.K. Simmons, best recognized as J Jonah Jameson from the "Spiderman" movies. It's directed by Alex Turner and written by Simon Barrett, who are the guys behind "Dead Birds", which came out a few years ago and has become a bit of a cult classic. This is about a group of US soldiers in present-day Afghanistan who unknowingly release a vengeful supernatural force that wages upon them a deadly war. If I remember, this was supposed to be a pretty good movie... and the trailer does look awesome. Not sure if it ever got a theatrical release.

" is an award winning horror from Jonas Quastel, who's made a few low-budget horrors, including: "The Untold", "Ripper 2: Letter from Within" and "Premonition". "Scourge" is about an ancient pestilence called, what else?.. The Scourge. And it's set free in a small town after being entombed in a church's masonry for 150 years. Bodies pile up and the job of stopping it falls on Scott and Jessie, who rediscover their love for each other in the process.

" is an award winning Korean film from the Jung Brothers, Jeong Beom-sik and Jeong Sik. The film is set in a small Korean hospital, which has become a labyrinth of haunted corridors... where a medical student is inexplicably drawn to a beautiful dead girl; a troubled child is tortured by bloody visions of her dead parents; and a married couple find themselves investigating a series of gory murders.

" is the first US release from the Finnish film company, Blood Ceremony and it follows Henri, a widower so feverishly obsessed in searching for answers to his wife's death that he turns to the occult for clues, with diabolical consequences.

" comes from writer/director Gabriel Barboza and it's about a group of friends who travel to South Texas to uncover the truth about a local legend of buried money. Instead, they uncover something buried within us all... and one by one, they mysteriously disappear. This is the first film from Barboza and he served as writer, director, producer and editor on the film. Looks well done and definitely has some budget behind it.

"Night of the Jackals

" is an indie horror from writer, director and actor DeWitt Jones. It's about an ex special ops assassin, Kera Moore, who's last target, a crazed former US chemical weapons engineer, survived and comes back for vengeance. Now, Kera is a sort of female "Blade". By that, she's a black girl, fully clothed in spandex, who kicks vampire ass... The engineer brings his final batch of US financed neuro toxin with him, which turns victims into ravenous vampire-like zombies known as Jackals, and then kidnaps Kera's husband. She then gets in her spandex suit and employs the services of a cop, a gangster and a chemist to unleash hell before the Jackals can take over the city. Check out the trailer... you know you want to.

" was directed by Jason Satterfield and written by Sara Bulle and Nick Firer. It's about a local legend that turns into a horrifying reality for a group of young grad students seeking to debunk a Wisconsin haunted house. Trailer looks good, definitely an indie-horror with a bit of budget behind it. Looks well done.

Oh yeah... and here's Mickey Rourke's acceptance speech. Awesome. Could you imagine this at The Oscars?

Thanks for the Legend Trip write up. I directed the film several years ago on a Micro Budget, (around 15,000.00) and couldn't be more proud of everyone involved. Yes, the film shows it's low budget roots from time to time, but I think it's got some original visuals and at least a couple sequences that still make me uneasy. I hope your readers give the film a shot and appreciate what can be accomplished on such a low budget.