New Horror Out on DVD this week... and it's definitely a good week 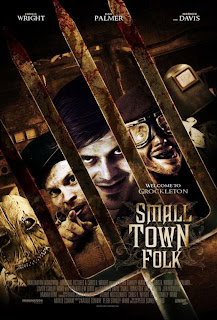 Things are really heating up now. First off, it's less than two weeks until Friday the 13th, which happens to be when "Friday the 13th" is hitting the theaters... so, not only are they rereleasing EVERY "Friday the 13th" Movie this week, there's also the upcoming "His Name Was Jason" and the "Jason Slasher Collection". Further, you've got LOTS of horror to pick from this week, I just wish I could check them all out... or even look into them more. Good stuff. Anyhow, you can read about them here, go over to our Youtube page to watch the trailer and, of course, if you're looking to buy them, just click on the titles...

Right off the bat, I'm just pissed that I didn't come up with the idea for a horror film called "Small Town Folk

" that stars Warrick Davis. No shit, I'm going to have to buy this poster. F'ing awesome. Now, I don't think I'll be doing the film any justice with this description, but it's about a place called Grockleton and some people that stumble on to it and, well. I can't do it. Check out the trailer. The film looks like a mix of early Peter Jackson and Sam Raimi, with midgets thrown in... The best quote I could find on it is, "imagine if Terry Gilliam took acid and wrote a horror script". SOLD! Where do I sign up? Pick of the week, for sure.

Over here at Dead Harvey, we're well informed of "Blitzkrieg: Escape from Stalag 69

" and it's finally getting it's regular DVD release this week. You can find an in-depth Dead Harvey interview with director, Keith Crocker, here. We've been following this film for a while now and I'd really encourage you to check it out... especially if you like Nazi movies with lots of boobs and gore. Really, it's a great indie horror and if you haven't seen it, do... and if you haven't checked out that interview, it wouldn't kill you to read that, either.

I feel like I've already talked about or reviewed "Killer Movie

", but it could just be that I've already seen this 'movie' a few hundred times. It's about a reality show gone terribly awry when the crew becomes stranded in a remote Northern town. There's a killer on the loose and he's stalking the crew, one by one. Rings a bell... Anyhow, it's written and directed by Jeff Fisher and I believe it's his first feature film, but he's been around in TV for quite a while. Peace Arch Entertainment is releasing it and they have been on a bit of roll lately, having brought out "Midnight Movie" and "JCVD", as of late. So, if past performance is an indicator for you, you may want to give this one a chance.

" is a Sci Fi Original from David Winning, who's behind some of the better Sci Fi Original Films, including: "Swamp Devil" and "Something Beneath". Winning's been around for quite a while and has been credited as a director, producer, screenwriter and actor. He's mainly known for his work on "Andromeda" and "Stargate: Atlantis". "Black Swarm" is about a pack of intelligent, but deadly, genetically modified wasps, who... when amassed into a black swarm, have a single, terrifying purpose... and that purpose is to kill... people.

" comes from Paul Gagne, who's more of an actor than he is a director, even though he's produced and written a few films. In fact, he was also the editor on "Sigma Die!" (read the next blurb) and "Dominion". As for other films that he's written and directed, you may have seen "The Slaughterhouse Massacre". If not, you may know him from his acting... He was in "The Unknowing", "Green River Killer" and even played a sailor in "Pirates of the Caribean: The Curse of the Black Pearl". It's about a private jet that crash lands in the Sierra Mountains and the survivors stumble into some deadly extraterrestrial beasts with barbed-like tongues that are able to pull victims into their razor sharp teeth and shred their human flesh like a haywire garbage disposal. Okay, I didn't make that up, that's from the box...

" is a low-budget, indie horror from Brain Damage and this one stars the always popular and best thing to come out of the Estevez/Sheen family, Joe Estevez - brother to Martin Sheen. It's directed by Michael Hoffman, who's made a slew of indie horror films and it's a horror comedy about a few sorority girls who rent an off campus property for summer vacation, but someone is watching, waiting... and they want to join the fun. No more details are necessary, I think you know what to expect here.

"Sick and The Dead

" is also from Brain Damage and it looks like it's some good old fashioned, shot on DV, indie horror fun... Directed by Brockton McKinney and Jordy Dickens, it's a zombie film that takes place a year after the dead come back and it poses the question, "a year after the world ends... what will you be?". I've actually given this a lot of thought. I'll be as far away from everyone, probably in the woods... maybe on a beach somewhere, drunk off my ass.

" comes from Midnight Releasing and it's written and directed by Jim DeVault, who's been the producer, writer, director and cinematographer on a few indie horror films, including "A Grave Waiting" and "Clox Without Hands". It's a shot on DV, slasher flick / murder mystery about an f'ed up orphanage that mistreats the children and those children's quest for redemption later in life. After watching the trailer, it looks to have everything you need, including blood, boobs and, well... more boobs.

Here's one for the fans... "Dead Noon

" actually came out in 2007, but I'm thinking that they're rereleasing it because Kane Hodder's in it. I mean, there's a pile of Jason retrospectives out, they're rereleasing all the movies, there's a bunch of hype... and the guy who's played Jason more than anyone else is in your movie that came out a couple years ago? I'd rerelease it, too. It's a low budget horror about a blood thirsty outlaw from the old west who's been resurrected to seek revenge on the present day town of Weston.

Well, okay... So, you're BET, it's halloween and you want to make an original movie to broadcast. Who do you get? Flavor Flav, obviously... and why not put in Tony Todd, Tommy "Tiny" Lister, Sticky Fingaz and... Gary Busey? Actually, as far as I can tell, Flav kinda hosts "Nite Tales

" and it's a double-feature, and that's in the loosest sense of the term. I mean that because I think the whole DVD is 90 minutes and that wouldn't make either of them features, but whatever...

Lastly, if you're into Italian horror or Lucio Fulci, specifically, you may want to check out "Paura - Lucio Fulci Remembered Vol. 1

". It's basically the life & times of the "Godfather of Gore", as seen through the eyes of his colleagues and peers.
Posted by Dead Harvey at 9:30 AM