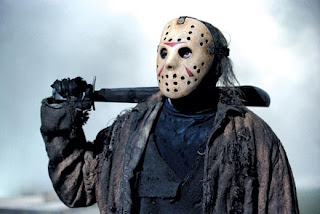 It's Friday the 13th and the new "Friday the 13th" comes out today. It's a big day. What sucks is, I'm heading out of town for the weekend and won't have time to check it out until Monday the 16th or Tuesday the 17th. Both dates don't have the same ring... Anyhow, I think it's going to do alright, box office-wise - it'll lead the weekend, for sure. I also think that it'll be controversial for fans of the series. There's a lot of questions, like... I was just discussing how, as far as we can tell, it's sort of like an amalgamation of the first three, right? How's it going to work? I mean, part 1 - it was the Mom. Part 2 - He wore a bag on his head. Part 3 - He got the mask. So, if this is the beginning, plus he's wearing a mask and it's not his Mom doing the killing... what are they going to throw out of the story and what are they going to try to explain? Too much speculation, gotta go see it and I'm filled with nervous anticipation... I mean I was raised on Jason and Freddy.

Anyhow, here's some stuff going on in the festival world...

The Paranoia Horror and Sci-Fi Convention & Film Festival is closing their submissions this week... if not today, by the end of the weekend. Soon, anyhow. We did an interview with the festival director, Shane Russeck, not too long ago, and he gave a lot of insight into what's going on and why you should head down there. Feel free to re-read that interview by clicking on this link, it's a good read. It should be a good time and I'm thinking of heading down to it, myself.

The last thing that I'll bring to your attention is ACEFEST. Unfortunately, I can't tell you much more than that because all their website says right now is "Please bare with us as we give our website a fresh new look for the 2009 season". It also says that they'll begin taking submissions on Feb 17, 2009, so check back soon, I'm sure they'll have something new up. As far as what they're about, it looks like they're about focusing solely on American-made works and providing an exclusive forum for domestic film and video. ACE stands for American Cinematic Experience, if you're interested.

So, there you go. Have a great weekend and we'll see you next week...
Posted by Dead Harvey at 9:00 AM