Interview with C.A. Kline, writer of The Fright Night Series 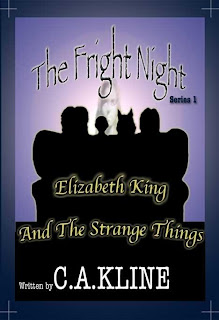 The definition of horror, when referring to a horror movie, is 'centered upon or depicting terrifying or macabre events' and if you asked the average horror fan what elements need to be in a good horror film, they'd probably say things like, it needs a good killer, there needs to be some good gore, a bit of nudity, some good scares... horror is generally thought of as that typical R-rated fare that parents don't want their kids to watch. Well, what about horror that parents DO want their kids to watch?

The truth of the matter is, horror is a genre and it doesn't necessarily have to be catered to a mature audience. If you were a filmmaker or writer, looking to break into the industry, and horror was your thing, you should probably look at what people aren't doing and do that, right? If everyone was making slasher flicks, shouldn't you make the opposite? Well, right now, there's just not enough youth horror and, remember, kids like this stuff, too... and although they sound like kid-fare, they're not ready for "Pumpkinhead" or "Chucky". They should be watching "Goosebumps" or reading "The Fright Night" series books from C.A. Kline.

"The Fright Night" series books from C.A. Kline are suspenseful and fun and it's horror that's geared towards kids aged 8 - 14... or so. Kline is currently on her fourth novel in the series and if you want to get a kid into horror, these are a great place to start. We had the chance to discuss the series, plus the whole idea of youth oriented horror with Kline and she offers a lot of insight into the writing process and where this sub-genre is at right now. It's a great read and if you're interested in the other side of the horror spectrum, you should probably give this a read...

Tell us about yourself. How did you get into horror?

I have always been fascinated with the macabre from when I was a young girl. I started watching horror films when I was about nine or ten and I think you are either born loving it or not. For example: I have two children. My daughter loves everything spooky and my son can be watching a cartoon and say it is scaring him. She definitely takes after me and he is just like my husband, who I have to practically beg him to watch a scary movie with me.

Tell us about The Fright Night series, where did you get the idea from?

I was home one night with my husband and one of his friends and they were getting ready to watch football. Not being a fan of the sport, I thought that it was going to be a boring evening when the thought just popped into my head that I was going to write a book. I have no idea where it came from because I really never thought about it before. I went into the computer room and began typing. Two weeks later my first book was completed.

Personally, I think that horror that's geared towards a younger demographic is currently an under served niche. Talk about youth oriented horror, where's the whole scene at right now?

I think there have been some excellent books and TV shows out there for our youth, like Goosebumps and Are You Afraid Of The Dark. The books are still coming but I would love to see more shows like Goosebumps or Are You Afraid Of The Dark's put back on Friday or Saturday nights. Something that kids have to look forward to as the weekend approaches.

Well I definitely feel that horror which is written for younger readers needs to be much cleaner that something aimed at older readers. What I mean is I think that killing and gore needs to stay away from the minds of our youth. Kids need to have a safe place to escape and enjoy a spooky book that is age appropriate. This is where The Fright Night Series books come in. They are geared more to giving the readers a good jolt without the blood and gore that you might find in horror books geared toward adults.

Talk about youth oriented horror on TV or film. Do you think the same rules apply on making good horror for youth on TV and film as it does for a book?

Absolutely! I will let my kids watch Goosebumps and Are You Afraid Of The Dark shows but I won't let them watch the real horror flicks that I watch. On Halloween night, my husband and I settled in to watch Halloween H2O, which we absolutely loved but my daughter couldn't understand why she couldn't watch it. Kids don't need to have the pictures of someone being slashed into pieces and have those images stay with them.

Are you thinking of adapting any of your work for film or TV?

It would be fantastic to have The Fright Night Series made into a TV series. I would love to see it move into a weekly Friday night spot and have someone talking to the viewers before the show starts, during the commercials, and at the end of the shows.

How hard was it to get started? What was the process like for you, as in... you just finished your first book. Now what?

It is rather easy to write as long as you have faith in yourself and are open to your ideas. I just finished my third book of The Fright Night Series, which is called "Mr. Peabody's Ghost". It is currently at the publishers and it will be released soon.

What advice would you give to up-and-coming horror authors and writers who may be looking to get a book published?

Finding a reputable publisher is where the hard work comes in. Publishers like Random House will pretty much only work with established authors or celebrities, who are a guarantee to generate sales. Another option is Pay On Demand publishing. Where you hire a publisher to publish your work. One piece of advice for anyone who goes with POD, make sure you have the editing done. One of my favorite books has many spelling and grammatical errors because the author didn't have this done, which was a huge mistake. Even though it is one of the most captivating and bone chilling books I have read, the reviews were poor due to the many errors that would have been caught with the the advanced editing. Therefore it is definitely worth spending the extra money for this service.

Where can people find more information about The Fright Night series and your other work or, better yet, buy a copy?

People can read excerpts from The Fright Night Series books on myspace.com/thefrightnightseries and the books can be found on Amazon.com

, target.com, barnes&noble.com, and all of the Internet bookstores. They are starting to make their way into Borders stores.

What's next for you?

I am presently working on my fourth book and I will scare you later.
Posted by Dead Harvey at 9:00 AM

Very nice and informative post.
Thanks for you post.
You may want to check out this site where you can find top Interview Videos for common job interview questions. Great site. www.topinterviewtips.com