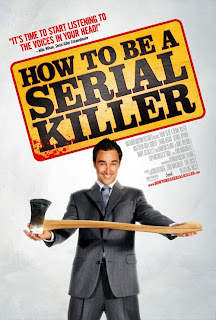 Well, well, well... it's a great week for new horror on DVD this week and I'm just going to get right to it. Check out all the trailers on our Youtube page, which you can find by clicking here... or you can click on the titles and be taken to their pages on Amazon, where you can read more about them and even buy 'em.

Without question, the biggest DVD release of the week is "Drag Me To Hell" and it's available both on DVD

. It's Sam Raimi's return to horror and he and brother Ivan actually wrote it before Sam went to work on the "Spiderman" films, so it's been sitting around for a while. Not only that, it's his first horror film since "Army of Darkness". I loved it and thought it was very 'Sam Raimi'... I'm not alone, either. It premiered at Cannes and was released to huge critical acclaim and was also considered a box office success, grossing over $80Million worldwide against a $30Million budget.

" was actually a TV Movie that came out in 2006, but it's getting rereleased on DVD now, mainly because it stars "Twilight" star, Robert Pattinson. It's also got the "Warlock", Julian Sands, in it, who's one of the creepiest actors in Hollywood... it's about a Flight Lieutenant that's confined to a wheelchair after being wounded in action. He's suffering from terrible nightmares and visions, while he recuperates from his injuries in a mansion in Wales and is being treated by a psychiatrist, played by Julian Sands.

I'm not sure of the budget of "Infestation

", but the production quality looks unreal. It's written and directed by Kyle Rankin, who also did "Hellholes", "Insex" and a few other films. It's being described as "28 Days Later" meets "Shaun of the Dead", but about giant alien insects. Trailer looks good... and if you're in to horror-comedies, it'll be a must-see.

"How To Be A Serial Killer

" has been making the rounds at the horror fests, has been getting a lot of great reviews and I'm really excited to check it out. It's about a young serial killer who imparts his knowledge to an eager pupil and it looks f'ing awesome. It's written and directed by Luke Ricci and stars Dameon Clarke and "Criminal Minds" Matthew Gray Gubler.

" is directed by "Blair Witch" vet Daniel Myrick and it stars Jonas Ball, Matthew R. Anderson and Michael C. Williams. It didn't have a huge budget and it premiered at the Tribeca Film Festival in 2008 and had a limited theatrical release in February of 2009. It takes place in Afghanistan, where a special forces team is on a mission to find an Afghan cleric. As they head in to the mountains, they begin to have strange encounters with armed gunman that disappear and later with unseen forces... check out the trailer, looks good.

" is written by Robbie Bryan and Ken Del Vecchio and is directed by Robbie Bryan. It stars Gabrielle Anwar, William Forsythe, Tony Todd and even has Billy Dee Williams in it. My God, the cast is awesome... Anyhow, it's about eight members of a Myspace / Facebook type chat room that are gruesomely being murdered in the privacy of their own homes...

" is another film that's being doing well on the horror film fest circuit. Out of the UK, it's a gnarly films about a group of six friends that encounter a group of slaughter-happy psychopaths with expert skills in butchery and a ravenous hunger for teen-meat pies. It's tongue-in-cheek humor plus carnage multiplied by graphic violence and that equals good times.

" is an acclaimed Dutch horror and it's the debut feature from writer/director Peter Van Hees. The only review I read says it has some similarities to "The Wickerman", in that it deals with pagan tradition and the supernatural. Also, it has a slow, creepy build towards a huge finale. Check out the trailer, looks really f'ing weird... it also looks to have a lot of graphic sex scenes.

" comes out on DVD this week and it takes place in Seattle and is about a struggling artist that gets bitten and finds himself on the fast track to leading a broken Vampire Coven.

" is directed by Jake Cashill and it's about a woman's obsession with her dentist that drives her to masochism, madness and murder. It ran at a bunch of festivals and... I don't know much more than that.

Is it just me or has Roger Scheck's "Nobody Loves Alice

" already been released... a few times? Anyhow, we talked with Scheck about it a LONG time ago, over a year ago. You can see our interview and discussion on it by clicking here. In any case, it's a great indie film and he made it while he was in school, which makes it all that much more impressive. Definitely worth checking out.

Also, check out the rerelease of the f'ing classic, "Hardware", which comes out on both DVD

- I LOVED this film when it originally came out. You can also get a rerelease of "The Stepfather

" - out because of the remake, which comes out soon and a rerelease of "Happy Birthday to Me