Setting Goals and Getting Shit Done... and Slamdance 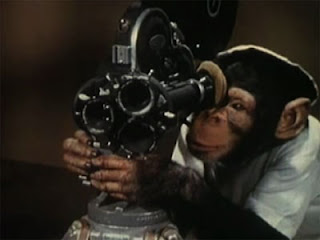 If you've tried to reach out to me or sent me an email over the last few weeks, you may not have heard back... and, quite frankly, it's because I'm swamped. I'll get to it, I promise. I'm heading out of town next week and I anticipate a lot of time to catch up on shit, but that's beside the point. Lately, my 'day job' has been insane and, as far as Dead Harvey is concerned, we've been working on a few projects, plus I want to make sure that I at least attempt to keep the site fresh... One of our projects, as some of you may know, was born from our "Dead Harvey TV" idea. It's moving along, but its transformed into something completely different than what we had originally conceived. That's not to say it's bad, I really like where it's going and hopefully something comes of it. I know we're pretty excited about it. On top of that, Brad is finishing up a wicked looking documentary right now I'm starting work on a new feature script. Me, I'm really into the ideas and concepts, producing and writing and I've had a few ideas rolling around in my head, but then this one just really solidified for me and now I want to get it out there. My goal for this one will be to enter it into the screenwriting festivals and competitions and see how it does... and, of course, that will give me a deadline to work towards.

Now, I want to write about this because it's really the only thing that works for me and, well, if it helps bring one other indie project to fruition, it's worth writing about. Quite frankly, if I don't have a goal or deadline, I'm not getting it done. Ideas will never get past the 'notes' phase. However, if I set a goal and create a deadline, then work my way backwards, giving myself milestones to reach, I tend to get things done. For me, the goal can't be just "write a screenplay", it has to be something like "write a screenplay to enter into Slamdance's screenwriting competition". Then, I have a date to work towards and I can say, "well, let's pump out an outline by this point, a treatment by here, let's break out scenes next, then let's have a rough draft by February". It's the same as school. If a professor or teacher said, "You have to write two papers this year, but I'll give you a choice - I'll either give you specific deadlines OR you just have to hand them to me at the end of the semester". Guess what? If you picked the latter, you'd do a way shittier job and, possibly, not even get them done. Don't believe me? They did a study on it... it's outlined in the book, "Predictably Irrational". I hate to break it to you, but at the end of the day, we work better and more efficiently when we set goals and deadlines.

So, what about those goals and deadlines? I guess you could just draw a line in the sand and say, "this is when my film will be done by". However, it's probably a lot easier to just pick an existing goal. Lucky for you, there's a shit-ton out there. They're called film festivals and they all proudly display their deadlines. Your first step should be to research the festivals and competitions. Read about the past winners and finalists... watch the films that did well or read about the scripts that were finalists. Pick a festival or competition that suits you, then find out their deadlines and work out a plan to have your film or screenplay ready for that deadline. You want to research them? We have a list of screenwriting competitions and film festivals made up, it's all on the left there. It hasn't been updated in a while, but the links still work... and I'll get to that updating soon, really.

Now, just to throw something out there, as far as objectives and goals go, there's no better than Slamdance. I mention it because the deadline for this years festival, which takes place in January, is rapidly approaching. Next years screenwriting competition is going to be my goal. I figure a year is plenty of time to take a screenplay from concept to polished completion. Anyhow, Slamdance is the King of the indies and it's helped many films find distribution, including this years success story, "Paranormal Activity". If you need some motivation, check out the interview that we did with the Executive Director of Slamdance, Drea Clark. It's from a year ago, but it was a great interview and it's well worth the read. You can find it here.

Have a great weekend and we'll talk to you next week!
Posted by Dead Harvey at 8:43 AM

If you would like an alternative to randomly approaching girls and trying to figure out the right thing to do...

If you'd rather have women chase YOU, instead of spending your nights prowling around in crowded bars and night clubs...

Then I encourage you to watch this short video to find out a strong secret that might get you your personal harem of hot women: