More "Paranormal Activity" Talk and What You Can Learn From It 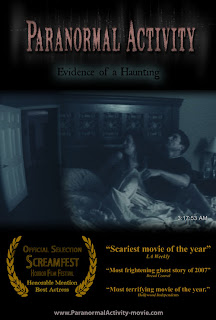 So, it's official... "Paranormal Activity" can be added to micro-cinema filmmaking lore. It has done what only "El Mariachi", "Open Water" and "The Blair Witch Project" have managed to do before it... and that is make a film, for next to nothing, and have it become a veritable Hollywood hit. How much of a hit was "Paranormal Activity"? Well, The film opened on September 25 on 12 screens, taking in $77,873 on its first weekend for an average of $6,489 per venue. Then, it opened to 33 theaters on October 1, doubling the box office reception, and it grossed $532,242, for an average of $16,129 per venue, bringing the 10-day total to $776,763. After that, it expanded to 160 theaters on the October 9-11 weekend and has now grossed, in total, $7,900,695. Should we compare that to the other big-budget Hollywood films that came out over the weekend? Why not? "Paranormal Activity" came in at #4 for the weekend, behind "Couples Retreat", "Zombieland" and "Cloudy with a Chance of Meatballs", but it had the best per-theater average for any film in release... and the buzz isn't dying. In fact, you can expect another big weekend, this weekend. There's not question about it - made for $15,000, it's going to be the most profitable film in Hollywood this year.

I'm sure that a lot of budding and fledgling filmmakers are salivating at the fact that a no-budget film came out of nowhere to make millions. Hey, if they can do it, we can do it! Of course, people rarely know the backstory, they just see it as an overnight success. So, what is the backstory? The idea came to writer/director Oren Peli a few years back, who knows when, really... Around 2005, he began prepping his house for shooting, while doing piles and piles of research on actual paranormal activity. The film was shot over 7 days in 2006, then he went into post-production.... for a while. He pushed the festival circuit as much as he could and eventually caught the attention of a rep at CAA, who signed him and helped him get the film into Screamfest in 2007. They gave away DVD after DVD to any distributor that would listen, but all to no avail. Then, they tried to get it into Sundance, but Sundance wouldn't accept it, but they did get it into Slamdance in 2008 and it screened well, but STILL no distributor would accept it. Later in 2008, a copy wound up at Dreamworks and it was passed around, people pestered their superiors, and it wound up in the hands of Studio Chief Stacey Snider, who then passed it on to Steven Spielberg... who gave it a thumbs up and THEN it got it's limited theatrical debut, which brings us to about where we are today. Easy journey, huh? Only 5 years or so for the pay day... and that goes without mentioning the amount of luck involved.

By no means am I trying to dissuade you from making your film, I'm just trying to tell you what was involved in making this film the success that it was... and if you have aspirations to follow suit on these very few films that have made the jump from micro-cinema to Hollywood success, we should look at the traits that they share. First up, notice that NONE of them were comedies... or even had comedic elements. They all took their subject matter realistically and extremely seriously. The only exception may be "El Mariachi", but it was more of dramatic piece and the humor fit. Further, they used the format to fit the film. "El Mariachi" was shot on grainy 16mm, which fit the film; "Blair Witch" and "Paranormal Activity" used camcorders and shot the films as if they were documentaries; and "Open Water" was shot on HD digital video, which gave it that real-life feel. So, use the format to your advantage and make it make sense. Also, all of the filmmakers took years, with huge sacrifices, before finally getting the film out. Oren Peli and company showed enormous amounts of patience over 5 years to get it to this point. The "Blair Witch" guys dedicated years into building an online campaign that built their fanbase. Robert Rodriguez lived off giving blood while he made "El Mariachi". Lastly, and possibly most importantly, all of them managed to get someone in the industry on board at an early stage and almost all of them passed on early distribution deals, holding out for some sort of representation and a better deal.

At the end of the day, "Paranormal Activity" will not be the last micro-cinema hit... there's more to come. The next one could come out this year, it could come out in 5 years... but it will come out and it may be because they watched what these guys did and built on that.
Posted by Dead Harvey at 11:00 AM