New Horror Out On DVD This Week... including one with a mutha f'ing puppet 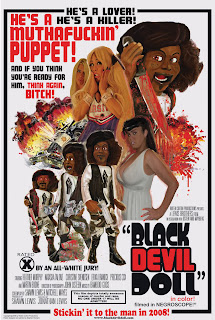 I apologize for getting this post out so late, but I'm out of town and find myself on a farm, around 45 minutes South of Portland, right now. I thought it would be easy to just set up the old laptop and get to work without skipping a beat, but... that's proven to be just a little more than difficult. In any case, I've been working on this post, on and off, all day. It may be cryptic, but it's all here...

I'm almost sick of mentioning it, but I have to because it's just unbelievable. "Paranormal Activity" has now grossed over $62Million, having just pulled in $22Million this weekend and, on its fifth week in release, beat out "Saw VI" for the top spot, which came in second, grossing just over $14Million. Otherwise,, really, horror appears to be hot right, as I'm looking over what's in the theaters now and in the top 10, you've got "Paranormal Activity", "Saw VI", "The Stepfather", "The Vampire's Assistant" and "Zombieland". Not bad, we're definitely well represented. I guess it's that time of year, though. It's also a fantastic week for horror on DVD. There's a lot to go through, so I'll go through a few of the more interesting releases in detail, but mention them all... and, of course, you can check out all the trailers on our Youtube page, found here, and/or you can click on the titles and be taken to their page on Amazon where you can read more and/or buy them.

I'm not going to lie, I've been anxiously awaiting the release of this first film for quite some time. I read about it forever ago, watched the trailer, talked about the trailer, forwarded the link to the trailer to tons of people... and now, finally, I can get my hands on my own copy of "Black Devil Doll

". It's screened at tons of festivals and has already built up a huge cult following. How can you not get pumped about a 70's retro, blacksploitation film, where the killer is a black, shit-talking puppet? Check out the trailer, you'll be rushing out to get this one, I promise.

This is actually another one that I've been interested in checking out for a while, but I actually already have a copy of it... in fact, I brought it with me and I'll be checking it out over the next few days. "Rotkäppchen: The Blood of Red Riding Hood

I didn't actually go out and see "Orphan

" when it was in the theaters, but I've been wanting to check it out ever since I heard the interview that Creative Screenwriting did with the screenwriter, David Leslie Johnson. If you google "creative screenwriting orphan", you should be able to find it. It's a great interview and it's a cool story because he had to pitch his take on the idea to Joel Silver, then, after getting the job, go and flush it out. The film's got a crazy twist, but if you like studying how screenwriters get their ideas and how they work, I'd suggest finding that interview, then watching the film.

I'm going to just touch on these other films, but the trailers are on our Youtube Page and you can click on them and find out more on their Amazon pages.

I wish I could look into this one more, as "Blood Night: The Legend of Mary Hatchet

" looks wicked AND it has a naked girl on the cover, so, all in all, that's a good start.

I'm not sure if it's up your alley... or up anyone's alley, for that matter, but the Executive Producer of "Scary Movie" has come out with another horror spoof, this one's called "Stan Helsing

"Fear(s) of the Dark

" is a French, animated horror anthology and it's being called one of the most "visually stunning and unsettling anthologies in modern animation history". Check out the trailer, it does look pretty f'ing good.

" is finally hitting the shelves... My bet is that this flick is one harsh movie. I mean, the trailer is creepy and gory enough...

I can't find much on "Dead Air

", but you've got a bit of Bill Mosely and that's alright with me.

" is not about a sauna.... well, actually it is, but it's way creepier and violent than that mild title would lead on. Who knows, maybe there's something lost in translation, but it's a Finnish/Russian film and it's about the space between Christianity and paganism... where two brothers find a sauna where all sins are washed away. Check out the trailer, it's definitely not the feel-good movie of the year.

" has hit the festival circuit pretty hard over the last year or so and it's about a call girl that ends up being the victim in a sick game that's going to spiral bloodily out of control.

" was the winner of best zombie film at 2009's Fright Night Film Fest. It's an indie horror and it looks damned good, too.

" is an indie horror where a couple tries to rent the scariest movie on DVD on Halloween, but end up being in a real life horror show that they might not live to regret...
Posted by Dead Harvey at 2:03 PM