New Horror Out On DVD This Week, a great week for the indies... 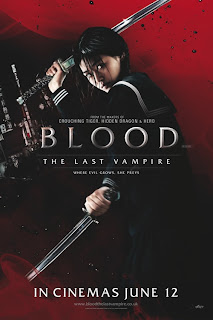 Just to continue following "Paranormal Activity" for a bit longer, it continued its success over the weekend and has now grossed over $33Million domestically. Not too bad for a film that cost $15,000 to make. If you're interested in the film, read our last few posts, as we definitely over-covered it. That's the last time I'm going to mention it for a while, as we're on to new shit... now, we're looking at the new horror that comes out on DVD this week and it's not a bad week at all. As usual, you can go to our Youtube page by click here and watch all the trailers and/or you can click on the titles of the films and go to their Amazon page, where you can learn more about them or even buy them...

I feel like I'm showing up to the party just as the keg's running dry here, but "Blood: The Last Vampire

", from Sony Pictures, had a very limited theatrical release in North America a few months ago, but was a hit in its native Japan. (It's also available on Blu-ray

) I should mention that it's an English language film, as well. So, it's not like you have to do any reading or suffer through a bad dub job. I say I'm late to the party because the roots to this film date back to the 2000 anime film of the same name, which inspired the anime series "Blood+", which spawned a manga series, novels, soundtracks, video games and fan books... and I've never heard of it. The plot revolves around Saya, a half-human, half-vampire samurai who preys on those who feast on human blood and you should really check out the trailer. If you like Asian action/horror films, you'll probably want to check this one out.

I just watched the trailer for "Blood Ties

", directed by Nathaniel Nose, and they mention a production company called Indiehorror Pictures. Anyone heard of them? I can't find anything, granted I didn't search too hard. Anyhow, this film is about a group of graduate students that find themselves in a bit of shit when they uncover a conspiracy while writing a thesis paper on some unsolved campus murders from 20 years ago. It's definitely an indie film, but the production quality looks great and it also looks like it could have some good gore in it, too.

" comes from The Asylum and is directed by Eric Red, staring Famke Janssen... it also comes from the writer of "The Hitcher". It's obviously got a bit of budget behind it... although, I don't think it had a theatrical release. It's an interesting plot, as Famke is under house arrest and is forced to stay within 100 feet of her house, which happens to be haunted. I'm also assuming that it's haunted by some sort of criminal partner of hers - one that wants 'something' back. That's what I get from the trailer, anyhow. It looks alright and has had some great reviews.

"Last of the Living

" is a horror comedy or, more specifically, a zomedy, out of Australia. It's about a bunch of slackers in a post-apocalyptic zombie-laden world who run into a hot girl that wants to save the world with their help. If you didn't know or weren't aware, there's one thing that Australians do kick ass at... and it's indie horror. The budget's low, but the trailer has helicopters, car chases, violence and lots of blood and guts. Bless all those Aussie's little hearts...

" as much as the next guy, but it sure makes it tough to do any kind of search for a trailer or other information. You think I have all day to come up with different combinations of words that can be searched with the single letter "P"? I couldn't find the trailer and I couldn't find much else out, either. It comes from Tartan Video and is part of their Asian Extreme films series. It's a Thai film about a young orphan that's taught magic from her Grandmother. However, when she goes to work in a go-go bar, her magic gets darker and the consequences get increasingly horrific.

" on Youtube, but knowing Bill Zebub, it may be because it was banned. Zebub is an absolute legend in the indie horror world and when he pumps out a film, you should just accept the fact that it's a must-see. "Ravage The Scream Queen" will be no different. Check it out, it's a must-see.

Everyone's favorite cannibalistic, backwoods, mutant hillbillies are back with a vengeance! "Wrong Turn 3: Left for Dead

" is the third and lowest budget installment in to the "Wrong Turn" franchise and it looks to have more sliced up, diced up and mutilated bodies than "Wrong Turn" and "Wrong Turn 2" combined. This one is directed by Declan O'Brien and stars Tamer Hassan, Tom Frederic and Janet Montgomery.

They're rereleasing the original "Satan's School for Girls

", which originally came out in 1973. So, we're not talking about the Shannon Doherty remake here. I only mention it because I remember seeing this as a kid, even though I was born after 1973. I can't find a trailer or anything, as the title has been used in so many different ways since 1973... I wonder if it's as good as I remember it?

Lastly, I want to mention that there's a "William Castle Film Collection

" being released this week and it's definitely one for the horror historians. If you're not a horror historian or you don't really care, you should know that Castle is one of the filmmakers that you should actually take note of. You see, Castle was one of the original B-movie, indie horror guys and he was famous for tacking on gimmicks to his films... He's the kind of guy that would've eaten social media alive and we could probably all learn a thing or two from him. For example, for his 1958 film "Macabre", he took out life insurance for each customer in case they died of fright during the film and he even went as far as to have fake nurses stationed in the lobbies of the theaters... His 1959 film "House on Haunted Hill" (which was recently remade) was filmed in 'Emergo' and had an inflatable glowing dark skeleton float over the audience during the final moments of the film. For his film "13 Frightened Girls", he launched a worldwide hunt for the prettiest girls from 13 different countries to cast in the film... and the list goes on and on and on, as he did some sort of marketing stunt for each of his films. Definitely one to look in to.
Posted by Dead Harvey at 9:43 AM