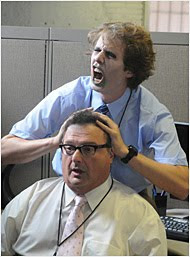 Here's a couple of rhetorical questions... would you make a film if no one could ever see it? How about, would you still want to be a filmmaker if it was a profession where it was a technical impossibility to make money? Truth is, probably not. If there was no audience and no money, chances are you'd get into something else. Thankfully, there are audiences and there is money... and, obviously, the two are closely tied. An audience is an audience and it's fairly easy to define and we all know that it needs to exist to make money, but there are two ways to make that money. One is where the audience pays and the other is where the audience doesn't pay. Traditionally, if the audience is paying, they're seeking out your product. They're going to the movie theater or they're looking for your film at Best Buy or at Blockbuster - the bigger the audience, the more ticket sales, the more money. On the flip side, with a free model, you're looking to reach people by offering something that they'll watch if they happen to stumble across it. This model is born from radio and TV, really. However, although the audience doesn't pay, someone has to and that 'someone' is advertisers. Advertisers like to pay on a metric called CPM's (Cost Per Thousand), where they pay X amount of dollars per thousand people reached. So, you can see how having a bigger audience is more lucrative. Either way, Audience = Money.

Years ago, the two models were cut and dry. You paid to go to the movie theater, as it was classified in the same category as live theater and there weren't really any ads. On the other side, you simply received TV and radio for free, mainly because there was no way to make an audience pay, as the technology wasn't there. You wanted to hook people with news, info and programming, so they would watch or listen to the ads... Now, we're at an amazing point in the history of media consumption. I can make you pay for radio, such as XM/Sirius on a subscription model, and make you pay for TV cable programming or video on demand. Also, brands are working with studio's to basically put ads in films... so, it's all f'ed up.

As an indie filmmaker or, as I like to say, an indie content creator, you're probably not going to get on TV or get a theatrical release right away, but there's another media distribution format that's just in it's infancy and I didn't mention it above... it's a little thing called the internet. It's something that people haven't really figured out, as there really aren't any barriers from a technological standpoint. Pay or not to pay? We could do either. Advertising or no advertising? Stream it, download it, embed it... watch it on it's own or through an aggregated site? No one knows... but it's there, it's growing, the money is coming and, personally, I believe the future of indie film is in online (and in the festivals, but that's a different post)

So, why was I thinking about all this? I was thinking of this because I came across Jon Heder's new project, called "Woke Up Dead", through an interview he did with TheWrap.com. First up, you know Jon Heder, he's Napoleon Dynamite. He went on to do a few films, but now he's doing this online project for Crackle.com. What's Crackle.com? Well, I'll tell you. Originally, it was a site called Grouper, which created a new way to share personal media files using P2P technology... In 2006, it was bought by Sony Pictures Entertainment to become a country-limited multi-platform web television network and studio. They distribute original, digital content that's broadcast quality, as well as distribute Sony's library of television and films. So, where's the money come from? They have sponsors and ads on the site, plus, of course, Sony promotes the crap out of their own stuff, so it's a bit of a loss-leader. So, what's Heder's project about? It's a live-action sci-fi/horror comedy about a guy named Drex, a 20-something USC student who wakes up one morning to find himself dead. They made 23 high-quality 4-5 minute episodes...

Now, I'll give you your action step! The long and short is, the media landscape is changing and I think it's changing in our favor. I know we all love our big-budget Hollywood studio films, but here's what you need to do. You need to dedicate some time to paying attention to niche-cable shows and original content on the internet like Heder's "Woke Up Dead". Programming like this may end up being your way to actually find that audience and make some money.

By the way, you can read that article from TheWrap.com here and you can check out the actual show on Crackle.com here.
Posted by Dead Harvey at 9:57 AM