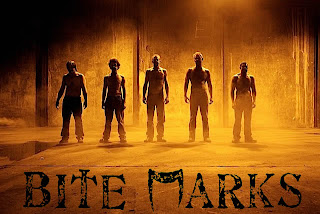 If you're wondering why I didn't post anything about new horror DVD's on Tuesday, it's because... amazingly... only 1 new horror DVD came out - "Voodoo Cowboys" - and it's currently out of stock. "The Twilight Saga: Eclipse

" also came out, but I don't really need and/or want to talk about it. "Voodoo Cowboys

" is a micro-cinema horror and it looks great - has Debbie Rochon in it, lots of zombie killing by backwoods hicks, what else do you need? However, instead of me talking about it, you should just go to The Dark Roast Releasing site, where you can read all about it AND check out the trailer. Why do the work when they can do it for me?

Now that I've got that out of the way, let's get to the main event - our interview with Mark Bessenger. We had the chance to talk with him about his upcoming film, "Bite Marks". Now, I haven't seen it, as they're currently in post-production, but I have seen the trailer and I'm really looking foward to checking it out. Production value is high, the acting looks superb and Bessenger seems to mesh together a lot of different ideas while keeping genre fans happy. It's a great interview, so make sure you give it a read!

So, tell us about “Bite Marks”, what’s it all about?

BITE MARKS is a horror-comedy about a truck driver named Brewster whose brother has disappeared and must take over his cross-country delivery of a load of coffins to a funeral home. Along the way, to help stay awake, he picks up a pair of gay hitchhikers who are having relationship problems. He immediately dislikes Cary, but is uneasy that he finds himself attracted to David. When their GPS misleads them into a junkyard and the truck breaks down, nightfall reveals that the coffins contain vampires. Hungry ones! Now, the mismatched trio must barricade themselves in the cab of the truck and try to survive the bloodsuckers--and each other--until dawn.

Now, you’ve mixed two genres together that usually don’t get mixed together ‘gay indie’ and ‘horror-comedy’. When you came up with the idea, what came first? The gay angle or the horror angle? Where did the whole idea come from?

My cousin Jennifer (who was hired as unit production manager) married a man whose family owned a scrapyard. The idea of setting a horror movie there tantalized me, and the thought of defending yourself from monsters in that location grew into the story that I wrote. Originally, the hitchhikers would be a straight couple, boyfriend and girlfriend. When we started our company, Blakk Flamingo Pictures, the executive producer asked me to pitch him two ideas. He liked them both, but wanted our first film to have some gay characters in it. I could do it for BITE MARKS, but not the other movie, so we went with BITE. Boyfriend/girlfriend Jack and Angie became Cary and Vogel, and that was that.

You managed to secure horror veteran Stephen Geoffreys, from “Fright Night”, “976-EVIL” and “Sick Girl”, for a role in the film. How did that come about?

I was discussing with a friend whether or not having a "name" in low budget films like you saw in the 80's straight-to-video releases was still relevant. My friend thought it couldn't hurt, and we began speculating on who would do something like this. Several names were tossed out, but then I remembered that I had seen Stephen Geoffreys in SICK GIRL mere days before and realized that he would be the perfect actor for our "name". I found him on MySpace, he asked to read the script, and then he was in! I was elated! His films, especially FRIGHT NIGHT, are truly favorites of mine.

I can only say that it was under $250,000 (waaaay under), and we had to apply for the Screen Actors Guild's Low-Budget Independent Film Agreement to get a couple of SAG actors on board, and that is the budget limit to be able to do that. As to the financing, a friend of mine who owns a very successful bar put up the funds after reading the script.

What state are you at with the project right now and talk a bit about getting to this stage.

I did a several months of pre-production and we shot in southern Indiana for 17 days with mostly Los Angeles talent and an Indiana crew. The film stars Windham Beacham of LONG-TERM RELATIONSHIP and BACK SOON fame. Porn starlet Krystal Main plays our vampire girl. Most of the supporting actors were also local. It wasn't an easy shoot, but it wasn't as hard as most films I've been on. Filming was done on the Canon 5D Mark II, which looks like a still camera but shoots true HD and at 24p. The footage is amazing. The movie is funny, scary, sexy and gory, and it is currently nearing the end of post-production. The picture is almost locked. At the last minute, I decided upon an animated opening credits sequence a la NIGHT OF THE DEMONS, so that put us behind schedule. The film is also being scored, so we're waiting for that, as well. 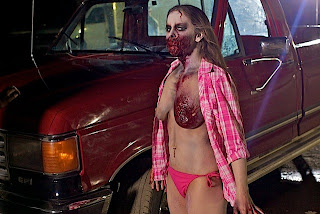 I would love to see the film get a festival run. I think audiences will enjoy it. We want it to be distributed, of course, and though I suspect it will be strictly dvd and On Demand, the ultimate goal for me would be a theatrical release of some sort, no matter how small. That would make my day, night and another day.

Where can people find out more about “Bite Marks” and is there a trailer that people can check out?

People who are interested can find out more about the film at our website, blakkflamingopictures.com, where they can see photos and read blog entries by myself and the cast. The trailer is posted there, but they can also see it on YouTube by doing a search on "bite marks teaser trailer". They can also join our Facebook Fan Page by searching on "Bite Marks" the Movie".

Now, tell us a bit about yourselves. How did you get in to indie horror and film?

I've always been a horror fan ever since a young age. One day, when I was six, I came home from school and found my mother watching THE REVENGE OF THE CREATURE on the Channel 3 Afternoon Movie. I was hooked from then on. I collected books, records, posters, magazines, everything I could find on horror. I bought all the Aurora monster model kits (both regular AND glow-in-the-dark versions!) and when I got a Super 8mm projector for Christmas, I started buying the old Castle Films compilations of classic Universal monster movies. Once, when I was snooping in the hall closet, I found a case with my mother's old 8mm home movie camera in it and got her to buy me some film. I began shooting my own little movies, which were all horror or fantasy-related. In 1980, I dropped out of college and opened one of the first home video stores in the area, which I ran for a year, then decided to try my hand at being a filmmaker, so I sold the store, went back to school and got my bachelor's degree in Creative Writing and my master's in Film. I shot two indie features, but couldn't find distribution for either, so I came to Los Angeles and opened a video production company that makes industrials and training films. The opportunity to make features came along, and here I am!

I'm not sure if you're asking me if I went or if I recommend one to go, but in either case, the answer is "yes." I went to Columbia College Chicago for my master's specializing in screenwriting. Would I recommend it? I think so. You do get hands on experience with equipment and professionals helping you learn what to do, but the best thing is the contacts you will make. People who think like you and are willing to help you make your films. This can be invaluable. I met Mark Pavia, the director of THE NIGHT FLIER, there, and we've been best buds ever since.

Well, as exploitation films were incorporated into Hollywood moviemaking, so is the indie film scene. You have big studios making small pictures, so they are kind of drawing the same ideas that normally only indie filmmakers would/could do. Plus, now with HD camcorders and Final Cut Pro so affordable, you are seeing a glut of indie product. The problem is, most filmmakers are only interested in doing gross makeup effects or getting girls to show their boobs onscreen, not caring about the story. That's why whenever I see another indie zombie film on Netflix, I cringe, because I know it's going to be all about "How can we show zombies eating people in a new way?" and they can't figure it out and shoot anyway, and you get the same old thing, resulting in the indie horror film scene spinning its wheels in the same muddy hole. There are some filmmakers doing new and interesting stuff, but they're few and far between.

Yeah, I have two projects buzzing around the greenlighted starting line. One, the most likely to go next, is the other picture I pitched, a spin on the slasher genre, but more like PSYCHO than FRIDAY THE 13TH (which I both love). It's more terror and suspense than gross-out. The other is a gay romance set during WWII. Whichever one I do next, I know it will be a blast to do and hopefully, the audience will think so, too.
Posted by Dead Harvey at 8:17 AM

Really useful material, lots of thanks for your post.