The Box Office and the New Horror Out on DVD 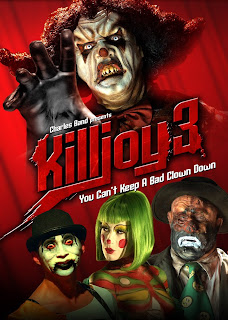 Well, it was a very uninspiring weekend at the box office... so, sorry if I didn't jump on reporting on it right away. The top spot went to "The Chronicles of Narnia: The Voyage of the Dawn Treader" and the number two spot went to "The Tourist", both were new this last weekend and both drastically underperformed. "Harry Potter and the Deathly Hallows Part 1" fell to fourth, but has brought in over $250Million to date. Not too shabby. There were a couple of notable limited releases, including "Black Swan" and "127 Hours". Both are getting a lot of buzz, especially "Black Swan", which graced the cover of Fangoria this month, if you can believe it. I think it's opening wide this Friday, so you should go check it out, if you get the chance. As for new releases on DVD this week, there are a few good films coming out. As usual, you can go to our Youtube Page to see the trailers and you can click on the title to be taken to the films Amazon Page, where you can read more about it and/or buy it.

" looks slick, has great production value, a bunch of good looking girls and appears to be well put together... I'm just not sure if the concept is going to fly, but I haven't seen it. A couple is on vacation in Spain and the girl is taken and becomes the trophy of a psycho named the White Arab... the guy does everything he can to find her. I don't know, it doesn't sound terribly original to me, but whatever. It probably has lots of T&A, maybe some decent violence, who knows?

As much as I'm not really a big fan of the Killjoy the demonic killer clown character itself, I'm a huge fan of Charles Band and his brand of horror-humor. So, with that, I'm proud to announce the release of "Killjoy 3

". If you didn't know, Killjoy is actually played by Trent Haaga, who is a Troma Vet and writer of "Deadgirl", "Citizen Toxie" and "Raving Maniacs", among others... I like Trent Haaga... I just don't like the Killjoy character. Sorry to anyone who like it. Anyhow, word is that this is the best of the "Killjoy" trilogy. So, if you haven't check in on these films yet, you might as well start here.

". What I like about this micro film is that it obviously doesn't try to take itself too seriously. The wigs, make-up and acting are all over-the-top and the plot is insane. Out of work TV presenter/creature hunter, Tuck Bushman, signs up to collect the reward offered by the mayor of Piddledown Dale, as there's some sort of demon creature on the loose. He gets more than he bargains for when he discovers that there's more brewing in the village than tea and some old wounds. As it's micro-cinema and this is Dead Harvey, we have to endorse it... Can't wait to check it out.
Posted by Dead Harvey at 9:09 PM

If you'd like an alternative to randomly approaching girls and trying to figure out the right thing to say...

If you'd rather have women chase YOU, instead of spending your nights prowling around in noisy pubs and restaurants...

Then I encourage you to watch this short video to learn a strange secret that might get you your very own harem of attractive women: