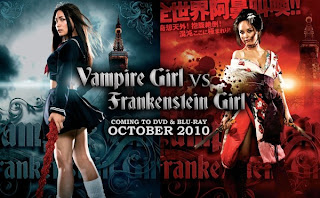 Here we are, smack dab in the middle of October - horror's wheelhouse. Usually, this means that there's a lot of good horror coming out on DVD and a lot of good horror hitting the theaters. As for this week on DVD, it's not bad. In fact, it's great for low-budget and micro-budget horror. There's certainly a lot of rereleases and I don't really want to mention them, as I like to concentrate on the new stuff... especially when a lot of the new stuff is micro and low-budget. So, as usual, you can check out all the trailers on our Youtube Page and you can click on the films title and go to its Amazon page, where you can read more and/or buy the film.

Let's just start off with "Predators

", as I'm very interested in what other people thought of it. Me, I wasn't terribly impressed. The acting was great, that wasn't a problem. I was ready to write off "The Pianist", Adrien Brody, before the film started, but... I bought him as a tough guy. Really, I bought all of the actors. What I didn't buy, was the concept. I get it, I get it... you wanted to tie it to the original. You know what, though? You didn't have to ram it down our throats. There's other ways. Not only that, there's so much suspension of disbelief needed to get through the plot and concept, I just wasn't buying the whole idea. Maybe I'm being too hard on it, I don't know. What did you think of it?

Okay, NOW we're talking! Based on the best-selling manga by Shungiku Uchida, it's the follow up to "Tokyo Gore Police" and "Machine Girl" - "Vampire Girl vs.Frankenstein Girl

". Don't let the goofy title fool you, this film ups the ante on all the demented Asian hardcore hyper-violence that you've seen over the last few years. Just watch the trailer. Personally, I LOVE these films and I really wonder if this stuff could cater to North American audiences? Obviously there's a market for it, but I wonder if it could ever go a bit more mainstream? Hmmm... I doubt it.

Not too sure about this one... mostly in that I'm not sure if the "Lost Tribe

" that's new this week on DVD is the same as "The Lost Tribe" that I found on Amazon and IMDB. In any case, this film MAY be about a a group of friends that get stranded on an uncharted island where they encounter an ancient tribe of humanoid creatures... and it may be about something else.

Well, if you're looking for a double whammy on Adrien Brody, you might as well pick up "Giallo

". If you don't care to get an Adrien Brody double shot, you may just want to pick it up because it's directed by Italian horror master Dario Argento. If you don't care about Argento or Brody, maybe you just like giallo films... if so, it looks like Argento pulls out all the stops. Takes place in Italy? Check. There's a crime involved? Check. Eroticism? Check. Gore? Check. At the end of the day, it's Argento.... pay your respects and go check it out!

", but I've heard about it and it's a massive achievement for micro-cinema. It's from the UK and it was shot for something like a few thousand dollars. Maybe even a few hundred dollars. It's a zombie film, but it's got a great twist... the hero, Colin, is bitten by a zombie and he dies and returns from the dead... and the film follows him as he wanders through suburbia during the throes of a cadaverous apocalypse. Low-budget, first person film shot through the eyes of a zombie. I love it.

Just in time for Halloween, it's a Christmas horror. It's the third film in the "Bikini Bloodbath" series, featuring the likes of Debbie Rochon, Lloyd Kaufman, Rachel Robbins, Monique Dupree and many more, and it's called "Bikini Bloodbath Christmas

" is the sequel to 2006's "Deadlands: The Rising". They're self financed zombie films from Gary Ugarek and he's currently in pre-production on a third film in the series, called "Deadlands III: The New World".

" was on Amazon this morning, now I can't find it... I'm actually quite excited to check it out because I just got a box of films from Chemical Burn Entertainment and Reality Films, the distributor, and I haven't started watching them yet... as this is the first to be released, this will be the first one I watch. I'll report back and I may even have an interview for you guys on this!
Posted by Dead Harvey at 8:00 PM