"Jackass 3-D" versus "RED" at the Box Office 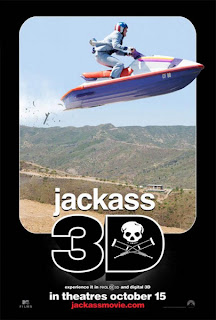 I've seen both prior "Jackass" films, the first one in the theater, and I've seen most of the episodes of the show. I'm a fan of the franchise, I'll admit it. Truth is, the whole concept behind "Jackass", which is, basically, just a bunch of guys filming themselves being, well... jackasses, has spawned a whole sub-genre. It's not the origin of reality TV, but I do think you can thank it for shows like "Wipeout" and "Half Pint Brawlers" (A Dead Harvey favorite). Not only that, how many other amateur jackasses are out there now? The jackass mentality is really one of the foundations of Youtube and accounts for most early viral videos. Is it stupid? Is it mindless? Does it not make any real sense? Yes, across the board. However, it's a viable form of entertainment and it makes money. "Jackass 3-D" made $50Million dollars over the weekend and won the weekend, beating out other newcomer, "Red"... which posted solid numbers at $22.5Million.

Now, let's look at "Red". "Red" stars Bruce Willis, Mary-Louise Parker, Morgan Freeman, John Malkovich, Helen Mirren and Karl Urban. It had a budget North of $60Million and is based on a three-issue, limited comic book series of the same name created by Warren Ellis and Cully Hamner. Everything is in place for it to work. Further, critics are saying that "Red" is good and it's getting generally positive reviews from the public. It's filled with recognizable names, it's got lots of action, it has a fairly tight script and the production value is through the roof. So, why did it gross half of what "Jackass 3-D" did?

Truth is, I don't know, but I've got a good idea. As screenwriters and filmmakers, we have to remember that we really don't know what the hell people are going to like. Also, we have to remember that this is the entertainment business. Just because something is written well and produced well, it's not necessarily going to be as entertaining as something that has no story or production value, but does have people beating the shit out of each other. Remember the famous words of Homer Simpson, "But "Football in the Groin" had a football in the groin". Lastly, remember your audience. Comparing the box office take of these two movies simply shows you the power of that key, young movie-going audience and they don't care about awards, nominations or even how well something is put together... they just want to be entertained for a good 90 minutes or so.

So, it really all goes back to something that I've been saying over and over again. If you're making something for you, great. Make what you want. However, if you're looking to be successful and reach people, think about your target audience and do your best to give them what they want.

As for the rest of the box office, "The Social Network" hung in at number 3, "Secretariat" was 4 and "Life as We Know It" came in 5th. The other notable film is "The Town", which is still hanging around in the top ten at 7th.
Posted by Dead Harvey at 8:30 AM