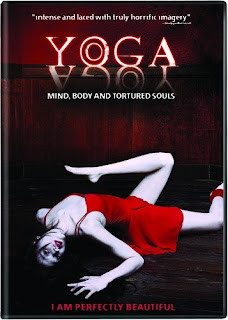 There's no easy way to put it, horror got pummelled by Facebook over the weekend. A tough pill to swallow. I mean, it wasn't even a contest. Horror brought a good game, but just couldn't even muster a blip on the radar. Actually, who's kidding who? I take that back, horror really didn't bring a good game. Both "Case 39" and "Let Me In" were virtually ignored over the weekend, but I'm not sure where to lay blame. "Let Me In" is based on the unbelievably awesome Swedish film, "Let The Right One In", which came out in 2008. Judging from the trailer, "Let Me In" borrowed heavily from the original, as a lot of the shots and scenes looked identical. That's not to say that's good or bad, but why is the original an award winning film and the remake didn't do shit? Maybe North American audiences aren't ready for a vampire film that has to do with kids? Maybe it was marketed poorly - I mean, they really hyped up that it was from "Cloverfield" director Matt Reeves and barely mentioned that it's based on an award winning horror film that rocked the world a few years back. The other horror film that came out was "Case 39", which even had a decent cast, including Renee Zellweger and Bradley Cooper. It also dealt with a creepy kid, as Renee Zellweger tries to save an abused kid from her parents, only to find out that the kid isn't so innocent. So, who knows? Maybe creepy kid horror is out... maybe it was never in? It does seem that all successful creepy kid horror films are underground films that breakout. "The Orphan" may be one of the most successful big budget creepy kid films in recent history, but she really wasn't a kid. Anyhow, it's a decent week for horror on DVD. As usual, you can check out all the trailers on our Youtube Page and you can click on the titles to be taken to their Amazon Page, where you can read more and/or buy the film.

Without question, the biggest release of the week is the remake of "A Nightmare on Elm Street", which comes out on both DVD

. Just a disclaimer - don't get me wrong, I love the classic 1985 original - I mean, who doesn't? I have Freddy posters, figures and a bust... all modelled after Robert Englund's version of Krueger. Having said that, this update isn't bad. In fact, it's pretty good. Jackie Earle Haley does a good Krueger and i think it's kinda cool to see an updated version. Really, it is. I'm starting to define my feelings on remakes a bit more, as I used to vehemently opposed to them. So, if it was a horror franchise that went ballistic on sequels, such as "Elm Street", "Friday the 13th", "Halloween" and "Hellraiser"... remakes can be good. It's like a reboot for the series. When they try to remake a stand-alone classic, no good. Like, "The Thing"... can't believe they're remaking that.

If you haven't heard of "Troll 2" or if have heard of it, but haven't seen it yet, get it and, hell... get it on Blu-ray. This week it's finally getting rereleased on both DVD

, something that a lot of people have been waiting for. Chances are, you've heard of the mayhem that surrounds this cult classic. Directed by Claudio Fragasso, under the pseudonym of Drake Floyd, and called "Troll 2" in an attempt to connect it to the 1986 film, "Troll", the film almost never saw the light of day. Why? Because it's terrible. It's so terrible that it's one of the best worst movies of all time... so, of course, there's a documentary, directed by Michael Stephenson, the child actor in the film, called "Best Worst Movie", which is all about the film and it's subsequent resurgence. Now, they're even talking about a sequel. What would it be called? "Troll II: Part II", of course. So, if you haven't seen the film that spawned the mayhem, do yourself a favor and check it out.

, is based on Brian De Palma's classic film of the same name. It stars Cloe Sevigny as a reporter that witnesses a woman committing a bizarre murder, then decides to undertake her own investigation when the police fail to find any trace of the crime. Her investigation leads her to a mental asylum and the discovery of the woman's once-conjoined twin. To be honest, I've never seen the original, maybe I'll start there...

" was actually quite tough to find any information on... only because there are so many films called "The Farm". That goes without mentioning three films called "Farm", then there's "Animal Farm", "The Last Farm", "The Lark Farm", "The Hill Farm" and various others. You know what? I know why... I have a few friends that live on farms and, without question, they are creepy places and a natural location for a horror film. This incarnation is an Irish film and it's about a shy guy that lives on a farm, when a young couple that's on the run from a vicious gang shows up. Farm boy falls for the young girl and you can take it from there... Maybe I'll do some research into farm horror. It could be an under served area of the market, now that I think about it...

" is, unfortunately, a terrible title to do any sort of search on, as you'll get nothing but instructional videos. However, I really want to see it, as I think it's a great idea for a horror film and, as it's a Korean film, you know it's going to be messed up AND feature lots mangled bodies... and the themes revolve around vanity and striving for perfect beauty. God knows I love my Korean horror. I'm in on this one.

"Don't Look In The Cellar

" looks awesome... it's a micro-cinema horror and it features friend of Dead Harvey, Randal Malone and is directed by Dennis Devine. Released by Fat Cat DVD, a subsidiary of Tempe Video, it's about a group of college kids that find an abandoned asylum on Halloween night... then, of course, you add a serial killer called Smiley and all hell breaks loose.

" and it's not bad. It is, obviously, a zombie film and it looks great, has some tongue in cheek humor, has some hot girls in it and a bit of gore. The only issue is the sound, which is all dubbed... and I'm not sure why they dubbed the whole film. In any case, you get over it pretty quick and it's really not about the dialogue, anyhow. Its worth seeing, for sure.
Posted by Dead Harvey at 8:55 AM