Upcoming Horror Releases, The Box Office and the Week in DVD's 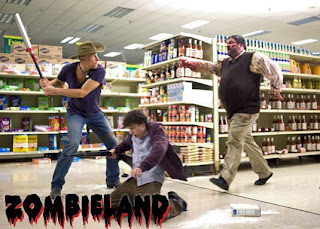 At this point, let's just look past "Avatar". It's the same old story at the box office again, as "Avatar" won the weekend... for the seventh weekend in a row. Looking forward, I'm trying to think what will knock it out of first place... Nothing next weekend, "Dear John" and "From Paris with Love"? Really, Lionsgate and John Travolta? Really? The next Scorcese / DiCaprio project comes out on Feb 19th, "Shutter Island", which could be a contender. I'm excited for "The Crazies" on Feb 26th, but that's not going to be a blockbuster. The next monster hit may be "Alice In Wonderland", from Disney, starring Johnny Depp. Long and short, "Avatar" is just going to keep ringing it up for a few weeks, anyhow. Horror's well represented over the next few weeks, as well. "Frozen", from "Hatchet" director, Adam Green, gets a limited release next week; "The Wolfman" finally comes out the week after that and then "The Crazies", the remake of the George Romero classic, comes out on Feb 26th. So, that's what's up at the box office. As for what's coming out on DVD this week, let's take a look. As usual, you can go to our Youtube Page and check out all the trailers and/or you can click on the titles and be taken to their Amazon page, where you can read more about them and/or buy them...

" comes out on Blu-ray and DVD this week and, I'll just say it... I liked it. I'm not the only one, either - it won awards. It won the critics choice for best comedy at the Broadcast Film Critics Association Awards and the audience award at Sitges. It's horror/comedy at it's best and Woody is classic. From a filmmaking perspective, it's funny to note that the project was originally pitched as a TV series and the film is actually just the first three episodes, reworked. The brains behind "Zombieland" are Rhett Reese and Paul Wernick and they broke into Hollywood by coming up with the idea for, and creating, "The Joe Schmo Show". "Zombieland" is their first feature and now they're tapped to do "Earth vs. Moon", "Zombieland 2" and the untitled G.I. Joe Sequel. Great success story...

I'm not going to lie to you, I don't know much about the short-lived TV series, "She-Wolf of London

", but you can now get the whole series on DVD. It was distributed in first-run syndication in the US from October 1990 to April of 1991. The first 14 episodes were filmed in England and the second season, which was filmed in L.A., only lasted 6 episodes. Never seen it, don't know anything about it.

In anticipation of the updated Wolf Man, Universal is rereleasing the 1941 version, "The Wolf Man (Special Edition)

", which is a classic... with Lon Chaney Jr, Bela Lugosi and the whole crew. It's one of those films that you should just see for the sake of seeing. The big thing of note is that this is the film that introduced the idea of werewolves being vulnerable to silver. Who knew, huh?

Alright you Debbie Rochon fans, get your box of Kleenex and hand lotion ready, as "The Good Sisters

" is finally coming out. Hey, that's not to take away from Debbie, we love her. She's a great actress, has done a lot to push indie horror forward and she's one of the top scream queens in the biz. Always, always, always support Debbie Rochon. Bless her heart...

Last one up this week is "Sensored

", directed by Ryan Todd and written by Kevin Haskin. It's about a children's book illustrator who inhabits a twilight world of shifting reality and illusion, where cruelty and rampant evil do battle with his better instincts and sanity is a question of perception. Nice rhyme... question of perception. I like that. Best part about this film? That evil children's book illustrator is played by Robert Picardo, the guy who played Richard Woolsey in "Stargate" and, of course, The Doctor in "Star Trek: Voyager".

That's it for this week. If you've seen any of these flicks, feel free to post comments on them!
Posted by Dead Harvey at 9:19 AM