The Weekend Box Office, "Wolfman" and the week in horror DVD's 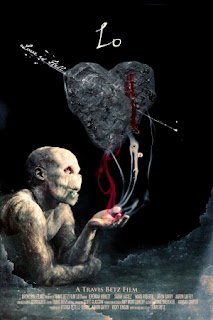 A Superbowl-sized hangover that could make the biggest lush in New Orleans cringe kept me from writing my post yesterday, so here we are today... and I feel much better, thanks for asking. So, what happened at the box office? Well, not much... except for the fact that a rom-com dethroned Avatar's reign. I guess the theaters were filled with people that weren't watching the Superbowl? So, "Dear John" takes the top spot and, really, it's not a huge shocker, if you think about it. I mean, this was the eighth weekend of release for "Avatar", it wasn't going to sit at the top spot forever and it's not like it did bad... it came in second. Speaking of bad, "From Paris With Love" underwhelmed and could mark the end for Travolta. Then again, it's been a slippery slope for him, the end could've been a while ago. When was the last time he made a film that mattered? Other than that, the only thing of note is that "Sherlock Homes" broke $200Million Domestic over the weekend. It's really a good film and it hasn't gotten much press about it, due to "Avatar". Anyhow, "Wolfman" comes out this Friday and I'm interested to see how it does, for a few reasons. I'm guessing that they won't mess with the story too much... I mean, it's a remake of the 1941 classic and I've heard they're really sticking with that plot. It's got a great cast, Del Toro is perfect. However, how will audiences react? Vampires are sexy. Well, Hollywood's made them sexy these days. Taylor Lautner's depiction of Jacob Black in "Twilight", specifically in "Twilight: New Moon", has made werewolves kinda sexy, too. Now, that sex appeal is what attracts the female audience, as well as a younger audience. So, can Del Toro add a bit of sex appeal or are we going straight for the horror crowd? The film IS rated R for bloody horror violence and gore... so, it looks like they're going for the straight horror crowd and, if that's the case, will it deliver? So, let's get to the week in horror DVD releases. As usual, you can see all the trailers by clicking HERE to go to our Youtube Page and you can click on the films title and be taken to its Amazon page, where you can read more and/or buy it.

If you think there's no original ideas left or if you're wondering what a festival film looks like, look no further than Travis Betz's "Lo

". It's about a guy named Justin and how his life changes forever when April, a bizarre and curiously naive woman, is mysteriously kidnapped by demons. Facing singing demons, talking hands, dancing bartenders and human sized rats, Justin's love is put to the ultimate test. I read about this film a while ago and have been anxious to check it out, I'll definitely report back. I love the originality and concept.

" is another festival film. It won at "Fright Night" and the "HP Lovecraft Film Festival" and it was an official selection at various others. It's about an amorous intruder, a witch, that's hellbent on becoming a young twelve year old's stepmother... which leads that twelve year old an inextricable path towards insanity and murder. Once again, I haven't seen it, but it did really well at the festivals and director Balaji K. Kumar got a lot of praise for his work. If you're gunning for the festivals, this and "Lo" should be on your 'must watch' list this week.

", which could be a bad omen... Once again, Taylor was a co-director here, so I guess they're just extending the Flavor Flav horror brand? I don't know, it seems like a bit of a stretch. If you can fill me in, please leave a post in the comments. The film is about prank calls gone bad and it's supposedly based on true stories.

After reading the title "Butchered

" and checking out the premise, I thought to myself, "well, this is a bit tired, come on guys..." Typical slasher title and a typical slasher plot - a group of teens charter a boat to an isolated island where there's a convicted serial killer on the loose. HOWEVER, I watched the trailer and completely changed my mind and now I'm going to have to check this out. It looks really well done and quite gruesome. I just wish they reconsidered the title... maybe there's some plot twists in there, too. I'll report back on this one, as well.

", which is a 3 disc collection that includes over 7 hours of grindhouse audio and video footage. It's a collection of hundreds of previews, tv commercials and radio spots for the sleaziest, sexiest and most off-the-wall films ever made.

I can't say I know much about the Spanish TV show, "Gabriel

", but it's supposedly a poignant love story of reincarnation, revenge, and redemption set against today's neo-Gothic underworld of vampirism and the occult. It was the winner of six Suncoast Emmy Awards and it's a 4 DVD set of the complete first season.
Posted by Dead Harvey at 9:15 AM