The Weekend Box Office, The Upcoming Week in Horror and our usual banter... 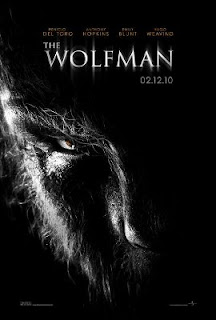 It was Valentine's Day yesterday and, well, fittingly, "Valentine's Day" ruled the box office. Really, it's about as far from 'our type' of film as you can get, but there are some interesting things to note about it. First up, how many of you checked out the trailer or one-sheet and thought, "what the fuck... how did they get so many major actors in that piece of shit?" Not only that, how did they keep the budget to under $50Million? Well, as for keeping the budget down, most worked on a discount and other took back-end deals. Why? Because they could shoot their scenes in just a few days and were able to head off to other projects without skipping a beat. Goes to show, keep things as simple and easy as possible for an actor and they'll compromise. Reviews sucked on it, but it did win the weekend. Speaking of badly reviewed films, "Wolfman" was a let down. Turns out that all the bad buzz was too much for it to handle and it came in third place, grossing just North of $30Million... not that great for a film that cost around $150Million to make. What IS interesting is to note that it ranks second all-time, just behind "The Twilight Saga: New Moon", for opening weekend grosses for werewolf movies. Then again, let's be honest, werewolves just don't sell that great. Third, fourth and fifth are the "Underworld" films. Then, in order, it's "Wolf", "Cursed", "An American Werewolf in Paris", "Teen Wolf", "Silver Bullet", "An American Werewolf in London", "Wolfen", "Teen Wolf Too", "The Company of Wolves", "Blood and Chocolate", "Bad Moon", "Skinwalkers", "Ginger Snaps II: Unleased" and, last on the list, at 19th, "Ginger Snaps". So, is it that there's just not a lot of good werewolf movies? Do people not like werewolf movies? Or do they just not make enough werewolf movies? Interesting topic... I'll ponder that. While I do that, let's get to the week in horror on DVD. As usual, you can head over to our Youtube Page by clicking HERE and see all the trailers. Also, you can click on the titles and be taken to their page on Amazon, where you can read more and/or buy them.

" is an indie film, from Patrick Johnson, that screened at The ShockerFest International Film Festival and The Spooky Movie Film Festival. It's a "Fatal Attraction" type film, where Tara, Ray's one night stand, decides that she wants to keep Ray... and she's an f'ing psychopath. Done well, there's always a market for these films. Why? Because the characters and predicaments are very real... and horror that revolves around real and possible scenarios really are that much scarier. Trailer looks great, I can't wait to check this one out.

" revolves around college freshman Jenny Traylor, as she joins her Welcome Week scavenger hunt at her new college in New York. However, as she and her friends decipher the cryptic text message clues on their cell phones, it becomes terrifyingly clear that the stakes in this game are life and death. I haven't seen this, but let's just say the premise isn't blowing up my skirt. I think an easy change, like... her and her broke friends sign up to get paid to do an experiment at their college and it turns ugly... may have been better. Have you seen "The Killing Room"? There's a lot that can be done with that whole concept - definitely not exhausted. Anyhow, I won't pass judgement here, as I haven't seen it.

" was originally called "For Sale by Owner"... however, there's ANOTHER horror film with that same name, one that stars Kris Kristofferson and Tom Skerrit. This is about a serial killer, who carves the number 13 into his victim's chests and is approaching the town of Emeryville. This, obviously, has the locals a little nervous. Sarah, one of those locals, MAY have just put herself into harms way after she may have let the killer into her house. The story here for filmmakers is to really, really, really think about your title. It's so much more important than you think. I couldn't find SHIT on this movie. "13Teen" doesn't search easy and there's a bigger budget film with the same name as "For Sale by Owner". You gotta be unique.

Speaking of unique titles, "Quiet Nights of Blood and Pain

" is a micro-budget horror from Andrew Copp and it's about an vet from the war in Iraq who just can't stop killing. He's trained in the torture and killing of prisoners and even though he's back on US soil, he just can't stop doing his job. It's a tough subject to tackle on a micro-budget, but the trailer looks pretty damned good. Much like "She's Crushed", the premise is plausible, which can make it very effective, if done right.
Posted by Dead Harvey at 9:37 AM

Guess what? This is exactly what major companies are paying for. They need to know what their customer needs and wants. So these companies pay millions of dollars each month to the average person. In return, the average person, like myself, participates in surveys and gives them their opinion.