Shutter Island wins the box office and a look at the upcoming week in horror DVD's. 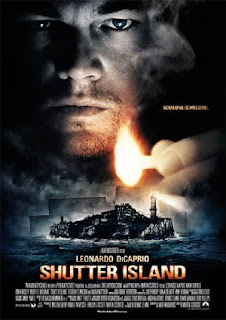 As much as I heart James Cameron and talking about the huge success of "Avatar", I'm glad it no longer tops the box office every week... I was running out of things to say. This week, "Shutter Island" tops the box office with a gross of over $40Million, which gives both Scorsese and DiCaprio their best box office opening yet. The interesting story here is that the film was originally scheduled for release on October 2nd, 2009 and it was pushed back for a variety of alleged reasons... from Paramount not having the financing at the time to market a big awards pic to DiCaprio's unavailability to promote the film internationally. In the end, it worked out for them. The film has received generally positive reviews, but, having said that, very few people have the balls to give a negative review to Scorcese. I haven't seen it, but it is Scorcese and it's a noir suspense/horror. Seems like a perfect storm for me. Next week, more horror... the remake of "The Crazies" comes out. Now, let's look at the horror that's coming out on DVD this week and, as usual, you can check out the trailers on our Youtube Page by clicking HERE and/or you can click on the titles, where you'll be taken to their Amazon page, where you can read more about them and/or buy them.

Sometimes, I have no f'ing clue what's going through people's minds. How in God's name did "The Box

" get green lit as a $30Million feature? It's based on the short story "Button, Button" by Richard Matheson from 1970 and was later adapted into an episode of "The Twilight Zone" and I think that's as far as this premise should have gone. The film is about a couple who receive a box from a mysterious man who offers them one million dollars if they press the button sealed within the dome on the top. If they do press it, someone they don't know will die. The film received mixed reviews and didn't really do that well. Apparently, they do keep the film intriguing and it's paced well, but the whole idea just seems so implausible, that I don't think it could carry a two hour film...

Personally, I think that "Cirque Du Freak: The Vampire's Assistant

" was completely mishandled. I haven't seen it, but right off the bat, I dismissed it. I saw the title, the cast, saw that it was PG-13 and that was it. Done... but here's the thing, they didn't market it properly. You see, I believe that horror geared towards a younger audience is a huge, growing and under served market. Done well, you're looking at "Harry Potter" or "Twilight". Done poorly, you're looking at "The Haunted Mansion" or, well... this. I didn't know that this film is actually an adaptation of the first three books of the series "The Saga of Darren Shan", which is a popular series geared towards young adults. The premise is great, too. It's about a teenager that's pulled into a fantastic life of misunderstood sideshow freaks and grotesque creatures of the night. I think John C Reilly was a bit miscast here, as his presence would lead you to believe that you're getting "Talladega Nights" or "Step Brothers" type humor, which you're not. He's also a big presence, possibly overshadowing the lead. Also, the title doesn't do it justice... it sounds corny. Originally, I wasn't going to pay any attention to it, but now I actually want to check this out.

They're rereleasing "The Caretaker

", an indie film that we covered quite some time ago. It's a great little flick and you can read our original post on it here.

" is a remake of the 1983 slasher classic called "The House on Sorority Row". The film is from Summit Entertainment, who are proving that, lately, they're not too great at producing successful films that aren't called "Twilight". It's got a decent cast, including Carrie Fischer and Bruce's daughter, Rumer Willis, and it supplies everything that you'd want from a slasher flick, from hot girls, to suspense and gore. I haven't seen it, but obviously someone liked it, as they're in works on a sequel.

". The film is a great micro-budget horror from Terry West, shot in black & white. It's based on the cult comic about a guy who's driven to blood-soaked extremes for his Dark Muse. He believes that tragedy brought her to him and he becomes a serial killer, preying on call girls. Will his new girlfriend stop his gory rampage or will she become his last victim? You'll have to watch "Blood For The Muse" to find out...

If you're into schlock, they're rereleasing a pile of it. There's "Horror of the Blood Monsters

If you're into Blu-ray, you can now get the awesome "Dead Snow

", the new version of "Sorority Row

", a personal favorite "Ichi the Killer

" and Troma's latest classic, "Poultrygeist: Night of the Chicken Dead