The Weekend Box Office, The Golden Globes and The Upcoming Week in DVD Horror 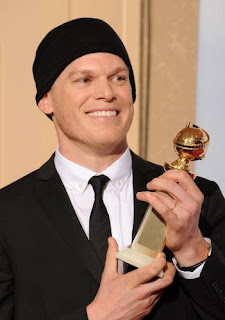 It seems a bit redundant by now, but... if you're interested, "Avatar" won the weekend... again. To date, it's pulled in more than $1.6Billion Worldwide and should easily slide above "Titanic"as the highest grossing film of all time in the next week or two. As for the other films that opened this last weekend, both "The Book of Eli" and "The Lovely Bones" did good business. What's kinda cool is that "The Lovely Bones" actually tanked in its initial limited run, so Paramount retooled the marketing campaign and targeted young females or, as they called them, "the Twilight crowd" and it worked. In other news, if you like to follow the industry, you probably checked out the Golden Globes last night. "Avatar" won Best Feature and won James Cameron the Best Director award and, yes, I think he deserves it. You just can't deny a juggernaut film like that... argue with me if you will, but it'll probably kick ass at the Oscars, too. The other notable film award, for me anyhow, was "The Hangover" winning Best Feature Comedy. I love that flick. As for TV, one of my favorite shows, "Dexter", got the nods it deserves and it was good to see Michael C. Hall win Best Actor, as well as John Lithgow to get Supporting Actor for playing the Trinity Killer. If you're interested, the reason Michael C Hall was wearing that beanie is because he's got cancer or, I should say, he's recovering from cancer. He's on the road to recovery after secretly battling Hodgkin's lymphoma. Elsewhere in TV, I've got a soft spot for Alec Baldwin, so it was cool to see him get Best Actor for "30 Rock". Otherwise, let's take a look at the week in horror DVD releases... which is another fairly weak week. As usual, you can go to our Youtube Page to see all the trailers and you can click on the titles to be taken to their pages on Amazon, where you can read more about them and/or buy them.

They didn't have it under horror on Amazon, but "Pandorum

" comes out this week. It's from Overture Films, who are the same guys that brought you the "Resident Evil" franchise. Quite frankly, it's not blazing any new trails in horror/sci-fi, but if you're into films like "Aliens", "Resident Evil" or, I don't know, "Event Horizon", you'll probably get a kick out of it. I liked it, it was a good waste of an hour and a half... and there's a few twists and turns, some good gore and scares. It's definitely worth a watch.

Now, I'm pretty sure that "Haunting in Connecticut

" came out on DVD a while ago, but it's popping up as a new release this week. So, I'm assuming it's a rerelease, but I don't know why... it does have some new box art. In any case, you probably know all about it. It's your basic, run of the mill, haunted house story. However, if haunted house stories are your thing, you may want to check out the low-budget "Spirits of the Fall

" instead. It's written and directed by Russ Diapper and it's out of the UK. The trailer looks... just alright. Having said that, the reviews are great. So, I'm going to have to go and check this bad-boy out... you should, too.

Other than that, you can get the William Shatner classic from 1977, "Kingdom Of The Spiders

" - seems like an odd couple, but I'll bite. They're both classics.
Posted by Dead Harvey at 9:14 AM

Payday Loans Online Apply in 5 minutes get up to $700 by the next business day. Get a cash advance in just 1 hour. [url=http://viiumft.rahuketu.net/map.html]allied cash advance robberies[/url] No cash advance fees gt No balance transfer fees gt Earn CURewards points take. Veteran39s Administration Military Loans or VA Military loans are available to. Cash payday loans online. Don39t get cash to go on a cruise.