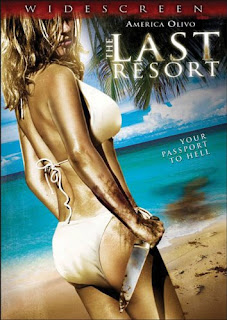 I can only assume that a lot of you went out to see "G.I. Joe" over the weekend, but I didn't. Personally, from a straight marketing perspective, I think it crossed a line that "Transformers" didn't. I don't know, I wasn't excited about it, but now that I see how well it did, I want to hear what everyone thought about it. Let me know, I may go check it out. Me, I'm REALLY looking forward to "District 9", which comes out this Friday... and I may talk a bit more about it later this week, as I love how director Neill Blomkamp and Peter Jackson got this project off the ground. Then, in a couple weeks, you have simultaneous horror releases, "H2" and "The Final Destination". That's right, horror hits it hard to end out the summer! Anyhow, let's look at what horror is coming out this week on DVD, as it's a pretty week. As usual, go to our Youtube page to check out all the trailers and you can click on the titles to go to their Amazon page, where you can learn more about them and even buy them, if you so desire.

" is a modestly budgeted horror film, directed by Brandon Nutt and written by Nathaniel Bozen, Nathan Oliver and Martina Papinchak. The foundation of the film is generic enough, it's about a bachelorette party gone terribly awry, which should give you the obligatory boozing and girls gone wild scenes. However, the film does take a page from the "From Dusk Till Dawn" playbook with a 180 degree turn, when... after whooping it up, then being robbed and left for dead, they end up in an abandoned resort that's inhabited by an unspeakable evil that takes control of all who travel there.

I've been looking forward to "The Wild Man of the Navidad

" ever since I first heard about it a year or so ago... it's a total throwback to the old 70's creature films and, man alive, do they pull it off. Check out the trailer. Not only that, check THIS out, it's co-produced by Kim Henkel, the co-writer of the original "The Texas Chainsaw Massacre" and it was written, directed and edited by two of Henkel's screenwriting/production students, Justin Meeks and Duane Graves. So, it's low-budget, indie horror... guided by someone who was one of the founders of the low-budget, indie horror scene. Like a riddle, trapped inside a puzzle, inside an enigma... with two degree's of separation from Gunnar Hansen.

" has nothing to do with the Crypt keeper or the tales from said crypt that he keeps... "The Crypt" is actually an indie film, which did have a brief theatrical run, about a group of thieves that break into a catacomb to steal jewels, but end up encountering the undead. It's from indie filmmaker Craig McMahon, who also did "Sportkill", "Orville" and the upcoming Lionsgate release, "Machined Reborn".

" is a no-budget indie horror that's been getting a bit of buzz, if only because it's got the makings of a cult classic. It's a horror/comedy about a cowboy from the old west who strolls into a small town to cause a bit of havoc. Trailer looks great, where'd they dig that guy up?

" is being released... or even re-released this week, as well. We talked with Scheck about it a LONG time ago, over a year ago. You can see our interview and discussion on it by clicking here. It's a great indie film and he made it while he was in school, which makes it all that much more impressive. Definitely worth checking out.

" coming out and I can't really find any info on it... "Dark Rising

" looks a little interesting, it's about a broken heart, a battle axe, a demon and a lesbian ex-fiance... You may also want to take a look at the sci-fi/comedy with a bit of horror in it, maybe, called "Alien Trespass

", starring Eric McCormack. It looks like a goofy movie, sort of like a lower budget version of "Mars Attacks!".
Posted by Dead Harvey at 9:08 AM