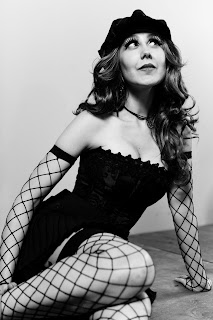 There's a lot to love about this new media landscape that's forming around us. It's never been easier to create, market, discuss, find and distribute content. The ongoing problem is with monetization, but I do believe that all the tools you need to succeed are in front of you... literally, as I'm assuming you're reading this off your computer. Ever toil over something for months, or even years, only to actually get off your ass and do it... then realize, why the F did I wait so long? That shit happens to me all the time and solutions are aplenty online. It's all out there and there's plenty of ideas out there, too. So, I wanted to bring a few projects to light and maybe they'll show you something that you didn't know or even give you a new idea.

This new web series, “Helena, Hussy of Horror”, was recently brought to my attention. As for the content of the series, it's a cool throwback to that 80's style of horror commentary and, in my opinion, it's very well produced and looks great. However, what I really like about this is how they put it together. Go check out the site, see how they're integrating Youtube with their web interface. They're using a lot of simple platforms, but it fits together really well and creates a nice user experience. If you're looking at creating a web series, you'll want to check it out. Here's their press release:

Hey there, doll babies! There's a new horror hostess in town. “Helena, Hussy of Horror” has launched her new monthly web series with “Drinks With Swamp Thing,” a brief look at finding the perfect cocktail for your spring party, as well as a “review” of the 1982 cult classic, Swamp Thing. “Drinks with Swamp Thing” can be viewed here. Originally done as a one shot for last fall’s Miss Horrorfest contest, Helena soon found new life by shooting an introduction for the festival run of the upcoming Anthem Pictures DVD release, Deadlands 2 and Trapped.

New Videos will be posted monthly. On the docket are shows about the original Friday the 13th and Jaws 3. Produced in conjunction with ilikethe80s.com, "Helena" is the brain child of Cindy Marie Martin, co-owner of Ningen Manga Productions. Their first feature film, Women's Studies, will be released on DVD this fall through MTI Home Video. For more on Helena and to watch all her videos, check out HussyOfHorror.com

I've also been noticing that short film is coming back... or it's getting popular, not sure if it was ever 'in'. Anyhow, I think that people are figuring out that our current media consumption habits are making short film more popular, even more saleable. They're watched on Youtube, you can watch them on your iPod or phone, you can even watch them at work. Not only that, short films are as easy and cheap to make as ever, so... there's a perfect storm brewing for short format film. Because of that, a lot of festivals are beefing up the shorts category. So, if you're looking to make something, think about making a short film. Easy to pump out and it could get the ball rolling. Here's a press release from The NYC Horror Film Festival and Monster Mania Con:

The NYC Horror Film Festival 2009 (nychorrorfest.com), in conjunction with Monster Mania Con (monstermania.net) & sponsored by FEARSmag.com, is offering short filmmakers a unique opportunity to have their short film viewed by a live audience - THE KILLER SHORT SUDDEN DEATH COMPETITION. The Monster Mania audience will select one winner that will be part of the 2009 NYC Horror Film Festival programming. The audience will have their say on Sunday, August 23, 2009.

Lastly, as we're talking about short film, I wanted to share something that I received from friend of Dead Harvey, Alex Masterson. If you remember, we talked with him, a while ago, about his awesome, award winning short film, "Mr Video". You can read more about that in this post. He recently made another short film called "Log 159" and he sent us the link here. Great use of tension, lighting, etc. Really well done.
Posted by Dead Harvey at 9:13 AM