New Horror On DVD This Week: Jesus VS Nature and more! 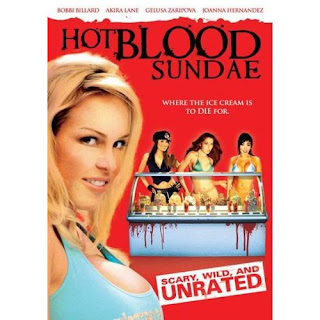 Okay, this is a good week in horror releases... and I promise that you'll find something in here that'll pique your interest. There's Jesus fighting nature, we've got a zombie apocalypse, there's a boobie bar ice cream parlour and even a little Debbie Rochon. Well, not a midget version of Debbie Rochon, just regular Debbie Rochon. As usual, click on the title and you'll be taken to its Amazon page, where you can read more about the title and even purchase it. Also, go on over to our Youtube page where you can see all the trailers.

", probably the biggest budget film of the week, is one of those films that I'm just not sure about... it was originally called "Long Weekend" and it's based on an Australian film of the same name, which came out in 1978. This version is directed by Jamie Blanks, who's got a pretty good track record, having made the awesome "Storm Warning", plus "Urban Legend" and "Valentine". It stars Jesus himself, James Caviezel, as he and his girlfriend, played by Claudia Karvan, head to a remote beach where nature gets its revenge. Yeah, I mean... nature? Really? Check out the trailer, I'm torn. I just hope Jesus' dog doesn't die, you know it will. Poor pooch.

Now, for those of you who are devout followers of the three B's of indie horror: blood, boobs and booze, I've got your release of the week right here: "Hot Blood Sundae

". Originally called "Ice Scream", it's about a perverted ice cream shop owner that turns his business around by sexing the place up a bit and combining, what he thinks, are America's two favorite past times: sex and ice cream. However, someone starts killing off his 'scoopettes'.

If you're a Dead Harvey regular, your pick of the week is going to be the micro-cinema epic, "The Zombie Apocalypse

". Depending on where you read about the film, it's either about a group of guys that leave a bar and encounter a legion of the dead OR it's about the Illuminati, a mysterious wanderer and a relentless agent. In any case, it looks awesome and if you go to their site, I believe they include a comic book, or have a comic book available, which is the prequel to the movie. I think I'm going to have to get in touch with these guys to discuss the film, looks great...

" is a low-budget horror anthology with five separate short films that all intertwine. What's cool about this project is that it has a lot of fairly decent names attached, as the cast includes Trent Haaga, Chuck Williams, David C. Hayes and Death Metal Hall of Famer Matt Olivo of Repulsion. Not only that, the makeup FX were created by Rich Knight (The Omen) and Larry S. Carr (Friday the 13th) and Al Cortez.

" is Timo Rose's latest release, which stars Debbie Rochon. Rose has pumped out a lot of films lately and has a few more coming out soon... I should really try to track him down and discuss some of them. In any case, you're going to get a fair bit of gore and a bit of nudity in this one, about a couple of ghost hunters (played by Rose himself and Joe Davison) that help a girl (Rochon) with her ghost problem.

Now, I haven't seen it, but from what I've read, "Alien Uprising

" is one of those films that only suffers due to its lack of budget. Now, it's not low-budget by OUR standards, but definitely by traditional standards. Sci-fi is hard to do on a modest budget, but it's definitely something that our readers can overlook. I mean, I think the trailer looks pretty f'ing good. In any case, the film obviously draws on "Aliens" a lot, as it's about a suspected prisoner uprising that brings Marines to the prison planet of Rove 12, where the few surviving prisoners are hiding from a ruthless, blood thirsty creature.

" is the third film from the Thai horror franchise, "Art of the Devil". Each film has new characters and a new story line, but they're all brutal and gory... if you're into gory, foreign films, look no further.

" before... for some reason it's being released again, so I thought I'd tell you about it... again. Just see it. It f'ing rules.
Posted by Dead Harvey at 9:35 AM