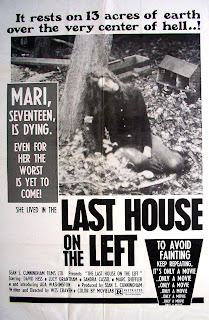 As I suspected, "District 9" kicked some serious ass over the weekend. Rated R and shot on the fairly moderate budget of $30Million, it yanked in approximately $37Million, domestically, in it's first weekend. Which, by my math, is awesome... and, by the way, although there is a bit of bad language and violence, the R rating comes primarily due to the excessive gore. It's the talk of the town, too... so, I expect it to hang on and do quite well over the next few weeks. So, good weekend at the box office. Also, good week for horror on DVD. As usual, you can check out all the trailers on our Youtube page and you can click on the titles to be taken to their Amazon page, where you can learn more and/or actually buy them.

", which is, of course, the remake of the 1972 classic from Wes Craven. Now, if you've seen neither of them... first off, I'm insulted, hurt and confused. Secondly, I'd highly suggest you check out the original (here's a link

to it's page on Amazon) before you check out the remake. I'm not sure when I first saw the original, but it was probably in the late 80's or early 90's and it really is a monumental film. If not because of the fact that it was so controversial, because it was so groundbreaking in it's depiction of real life horror. I mean, it was only recently UNbanned in the UK, what does that say? But, I digress, as this isn't about the original, this is about the remake... which came out March 13 from Rogue Pictures and was produced by none other than Wes Craven, as well as the original producer of the first film, Sean S. Cunningham, who happens to be the originator of the "Friday the 13th" series. As for the film itself? Yeah, it's worth seeing. You'll like it.

" is the third installment into the "Death Note" series, which are Japanese films based on the "Death Note" manga and anime series. They basically follow college kids who try to rid the world of evil by using a supernatural notebook that kills anyone who's name is written in it. It's bigger than Hello Kitty in Japan and Warner Bros has already acquired the American rights and, no joke, there were rumors that Zac Efron would be playing the lead role, named 'Light'. In any case, the US release is slated for some time in 2011, but you can check out all the originals now.

", starring Bill Pullman and Julia Ormond, and it's definitely worth checking out. In hindsight, Bill Pullman is cast perfectly. You'll be a little surprised by his performance, I think, and it's one of those films that you may want to see again, right away. It's directed by Jennifer Lynch, daughter to David Lynch, who serves as producer. In the film world, Jennifer is probably best known for her film, "Boxing Helena", which was, well... well, you can tell she's David Lynch's daughter. Now, David Lynch is best known for making fucked up films, but Jennifer actually has a flare for horror. When she was starting out, she wrote an episode for "Friday the 13th: The Series" and, now, not only did "Surveillance" take the top prize at the Festival de Cine de Sitges, she made history at the New York City Horror Film Festival by becoming the first female to win Best Director in the fest's history.

Can't go too long with out a Sci-Fi original, can you? "Wyvern

", directed by Steven R. Monroe and written by Jason Bourque, originally aired some time in January, I believe. The actual idea of a wyvern, which is a winged reptilian creature, comes from Norse mythology. They're kind of like dragons, I guess. In any case, Nick Chinlund, Erin Karpluk and Barry Corbin, among others, stumble on to one on their way to Alaska and all hell breaks loose.

", which is a cash-in on the fact that "The Final Destination" hits theaters this coming weekend... or is it the weekend after? I know it comes out the same weekend as "H2". Either way, this one's in 3D.
Posted by Dead Harvey at 9:05 AM