We're Back... With The New Horror Out On DVD Over The Last Two Weeks 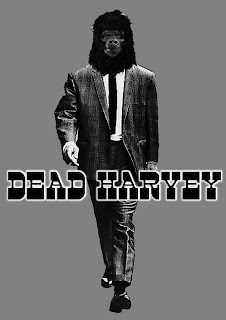 Dead Harvey is back after our Annual General Meeting last week in L.A. and things should get back to normal here soon... Well, Aaron and Brad never really went anywhere, I just flew down. And, by AGM, I really mean we met up with a few people, drank a lot of beer and discussed the state of the union. And, actually... by normal, we talked about a lot of exciting things and are hoping to take Dead Harvey in some new directions. So, basically, disregard that entire first sentence.

One of the things that I'm going to change is that I'm no longer going to write posts that rival the Magna Carta in length. I'll be more concise, link to things and let you delve deeper, if you so desire. For example, I'll briefly be covering the new horror that comes out. I may highlight a film or two, but you'll be able to click on the title to get more information and/or buy the film off Amazon and you can check out the trailers, as usual, by going to our YouTube page... which can be found here. This post will still be a kinda long, as I'm explaining what I'm doing and I have two weeks of films to cover, but this is all a work in progress and you can let me know what you think... I'm a man of the people, for the people.

Anyhow, some highlights on what came out last week...

The big film of last week was obviously "Friday the 13th

", which stars Derek Mears as Jason and was directed by Marcus Nispel. It's a reboot of the series and they're already in pre-production on a sequel. This one kind of mashes up parts 1 through 3, as we all know that his mother's the killer in part 1, he wears a bag on his head in part 2 and finally gets the mask in part 3. They address all of this, some of it well... some not so well. However, at the end of the day, the film is worth checking out and, I have to say, it's good to see some life back into the series.

I'd like to bring special attention to a couple of films that came out last week, as they're by friends of Dead Harvey. One is "His Name Was Jason: 30 Years of Friday the 13th

" and the other is "Murder Loves Killers Too

"His Name Was Jason" was co-produced by Blake Reigle, who was the guy who made "Beneath The Surface", a film we covered a while ago. You can check out our interview with him here. "His Name Was Jason" is essentially a documentary that looks back on 30 years of Jason. If you're a fan of the series, you'll really like what they've done with it.

I watched the first 30 mins of "Murder Loves Killers Too" before I got on my flight to LA last week, but didn't finish it all until last night - battery died on my laptop, had to switch to the PSP for the flight. In any case, we'll have an interview with director Drew Barnhardt soon, as I can now actually send him some questions. It's a great indie horror with great production value, good acting and some good boobs. I'm excited to discuss it with Drew.

Other highlights include: "Born

", with my favorite Jason, Kane Hodder, which is about a virgin girl who gets pregnant with the devil's seed. The indie zombie flick, "Platoon of the Dead

", from John Bowker. Best title of the week goes to "Terror at Blood Fart Lake

", an indie horror/comedy from Chris Seaver. There's also Akihiro Kitamura's "I'll Be There with You

", which has a bit of budget behind it, includes a Baldwin brother, but promises lots of boobs, blood and booze. Lastly, don't forget about "Cannibal Killer Clowns On Dope

", which I don't know much about, but really dug the music video trailer.

I'm running low on time, but this weeks highlights include: "Simon Says

", a gore-fest released by Lionsgate, from William Dear and starring Crispin Glover. The modern mummy movie, starring Vinnie Jones, "Legend of the Bog

" and, lastly, the indie zombie horror out of New Zealand, "Zombie High