New Horror Out On DVD This Week: Monsturd, Retardead and Snakes on a Plane on a Submarine 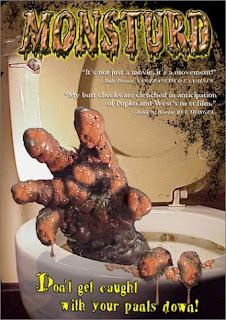 Okay, so... Sam Raimi's "Drag Me to Hell" came out over the weekend and... it didn't do too badly. Not only that, as a PG-13 film, it was pretty good. Reviews are positive, word back from other horror fans is good, so... we can breathe a sigh of relief there, I think. However, it got killed by Disney's "Up", which was to be suspected. (Even though a lot of industry insiders were saying "Up" was going to bomb, but I'm not sure why) Anyhow, what I didn't expect was that "Night at the Museum II" stayed strong and came in second, with "Drag Me to Hell" coming in third. "Terminator Salvation" drops to fourth, but still had a pretty good weekend. Next week is nothing but comedies, with "The Hangover", "Land of the Lost" and "My Life in Ruins" being the big three. Regardless of all that... and more importantly, let's look at the horror that's coming out on DVD this week. If you're into the micro-cinema and indie shit, it's a week for you. As usual, click on the titles to be taken to their Amazon page and you can go to our Youtube page to see all the trailers.

I can't find anything that says this isn't a Sci-Fi original, but everything about this screams Sci-Fi original. Written by Mark Sanderson and directed by Fred Olen Ray, "Silent Venom

" is basically "Snakes On A Plane" on a submarine... and you don't get Samuel L Jackson, you get Luke Perry and Tom Berenger. That and these snakes mutate... the more people they eat and kill on the submarine, the more they grow in size and ferocity. I'm a bit nervous, as I really don't know how Dylan's going to get out of this one.

" is that it's apparently based on a true story concerning an exotic species of eel that are released in Asia that can breathe air and survive on land. I say that's funny because that means that "Razortooth", which is about a group of college kids that end up having to capture or kill a genetically modified super-eel that's been released into the Florida Everglades, is, therefore, based on a true story... which makes me laugh a bit. It's the directorial debut from Patricia Harrington, who was an actress in "Carnosaur", wrote "To Sleep With a Vampire" and was the executive producer of "Stripteaser".

" is written and directed by Rick Popko and Dan West. I actually have a copy of this on my desk right now, which I'm anxiously hoping to get to soon. After I do check it out, we'll be putting together an interview for the site, so stay tuned for that. The absolutely genius title should sum up what you're getting with this film, but I'll tell you the plotline, regardless.... as it, too, kicks ass... the evil Dr. Stern returns, armed with a lethal intelligence serum that yields horrific results at the Butte County Institute for Special Education. "Retardead" - they're not so special anymore... Genius.

If you're releasing one movie, why not release your other movies, too? Also from Rick Popko and Dan West comes "Monsturd

", which is about an escaped serial killer that falls into a sewer tunnel full of chemicals that transform him into a half human, half feces creature that goes on a killing rampage. Independent horror cinema is alive and well, people! Unfortunately, I DON'T have a copy of "Monsturd", but I'm definitely going to get my hands on it and bring it up in the interview.

" finally comes out on DVD this week and, if you remember, we talked with him about the film a few months back. Click here to go to our interview with him. He offered up a great interview and the film is definitely well worth your time and we highly recommend checking it out.

" comes from Jeremy Rubin and it won the DV Award at the, uh... DV Awards. It also screened at a few other indie horror festivals, as well. It's about a group of five friends who attempt to make their lives more eventful, but end up thrown into a world of deceit, betrayal and murder that descends into a twisted tale of sexual deviancy. The trailer is VERY intriguing, may have to get in contact with Rubin and discuss the film with him.

", from Nathan Hope, is about a small town where girls are mysteriously disappearing, but no one seems to care. After revealing to her best friend Sarah ("Twilight"'s Anna Kendrick) that she has been meeting men online, Jillian ("Lost"'s Tania Raymonde) goes missing. Now, the only clues to her whereabouts are her diary and a cryptic message sent from her cell phone.
Posted by Dead Harvey at 9:15 AM