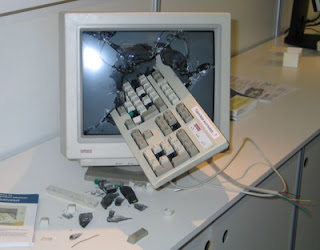 Well, I still don't have access to my PC at home, the keyboard refuses to work... I gotta say, though. It's surprising how far you can get with just a mouse. Regardless, the lack of a typing instrument does make the act of typing tough. So, I'm now at work and I'm going to quickly hammer out a post about a couple of articles that I came across.

I know that most people are far more into the creative process of developing and creating a film, but I do think it's important to understand the business end of things. I mean, if you're making a product and you're trying to get that product out there, you better know how the selling and distribution process of that product works. And this article, "Netflix Boss Plots Life After The DVD", has some great insight into how Netflix works, as well as where the industry COULD be going and how these guys are dealing with it. Good article, definitely give it a read. I thought it was really interesting that Netflix basically started out as a software system for recommending movies... a software system like that, mixed with VOD, could be the Holy Grail for indie horror.

There's a specialty horror cable channel in Canada called Scream... or, I guess I should say there WAS a cable channel in Canada called Scream. I just read the article, "Scream TV to lose gore after Dusk falls this September", where they discussed how they're going to change the lineup on the channel and rebrand it. I guess ratings were a little shy of stellar, so they added the murder mystery drama "Supernatural" last year and it bolstered their female audience by 100%. So, they're going to add a few more similar shows and rebrand the channel as "Dusk". Now, a lot of people may see this as the demise of hard-core horror and the rise of a softer, more friendly style of horror, but I see it another way. Cable channels won't run the more intense stuff, they peak out on things like horror festival films, the "Saw" franchise, old horror TV shows, things like that. So, I think the hardcore horror fans look elsewhere already. What's really happening here is that the cable company figured out that there's another demographic out there that's into watching horror on TV, more specifically... 18 - 49 year old women. That's a big demographic... and when you're planning your next project, maybe you should keep them in mind, too.

That's it for this week. I'm going to do my best to get my PC up and working over the weekend, which should mean plenty of good content for next week. Have a great weekend!
Posted by Dead Harvey at 10:10 AM