New Horror Out On DVD This Week: Header, Dead by Dawn 2 and more... 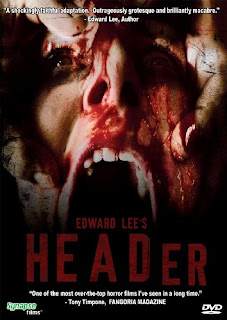 The positive out of the weekend was that I got my PC back up and running again. It turns out that the thing that receives the signals from my wireless keyboard and mouse had crapped out. So, I went out and bought the cheapest wired keyboard/mouse set I could find ($30) and it works like a charm. I've now made the decision to replace frivolous wireless devices with wired counterparts... Too much wireless is rotting my brain. I mean, if you could actually see the wireless signals travelling through my condo, I don't think Catherine Zeta-Jones would be able to slink her way through them.

Regardless, let's look at some of the notable DVD releases of the week. As usual, you can go over to our Youtube page to check out the trailers and you can click on the titles to go over to their pages on Amazon, where you can learn more and even buy them, if you so choose...

One of the more notable releases of the week is "Header

", which was made in 2006 and was directed by Archibald Flancranstin. Adapted from Edward Lee's novella of the same name, it's set in the backwoods of West Virginia and follows two stories that end up colliding in death and self-destruction - one of a jaded ATF Special Agent and one of a bumpkin ex-con who returns home to be with his handicapped grandfather. Lee was actually surprised that it was made into a film, as he thought it was too sexually violent and over-the-top. Anyhow, it's done indie-style, as Flancranstin not only directed it, but he also shot it and edited it... Edward Lee makes his film debut in the movie and, if you care, noted author Jack Ketchum has a cameo.

"Dead By Dawn 2: The Return

" is the sequel to "Dead by Dawn", an indie, micro-cinema film that we covered not too long ago. Here's a link to the interview that we did with Nigel Hartwell, who's the director of both. Nigel's also the brains behind the indie horror distribution company New Blood Entertainment and, obviously, he distributes his films himself... not only that, though, he's more than happy to talk to you about distributing your film. Check out that article and, remember, support indie horror!

" is a Sci-Fi Original in the vein of "Hydra", "Mega Shark vs. Giant Octopus" and the like... it's directed by Paul Ziller, who's behind a lot of the sci-fi originals.

Although it sounds like a Sci-Fi Original, "Monster X Strikes Back

" is not... I haven't seen it, but it looks to be a throw back to 80's Japanese Sci-Fi/Horror and it looks fricking awesome. Check out the trailer on our Youtube page. It comes from Tokyo Shock and it's about a Chinese rocket that causes the monstrous Girara to be born. Of course, the G8 summit is being held at the nearby Lake Toya and all the members of the G8 implement individual plans, which all end up failing... How do you stop Girara? Seriously... how DO you stop Girara?

Back by popular demand, it's "Fear Girls: Volume 2

". Don't expect much narrative here, you'll get three vignettes and sexy stripteases featuring, and I quote, "the hottest ladies of horror". Check out the trailer on our Youtube page, you'll see what you're in store for. It stars the Russian Twins, "Lana and Taya", among other hotties.

" stars Rachel Miner and Christian Kane and it's not really a horror... it's more of a modern day "Bonnie & Clyde". I haven't seen it, but I bring it up because I heard it was rather violent.

" is about identical twin sisters, Lora and Ashley Gerritson, who had a special psychic bond. Lora left their small town to become a photographer, Ashley stuck around to work at the local diner. Then, Lora begins receiving chilling visions from her sister and returns to the small town to find her sister...

" is an award winning Japanese film produced by master of J-Horror, Takashige Ichise. It's part of a ghost story anthology. The other films in the anthology are Shimizu's "Reincarnation" and Kurosawa's "Retribution".
Posted by Dead Harvey at 11:00 AM

I'm a filmmaker. I have two films I'd like you to check out / review:

How do I get you a copy?

Shoot me an email at ted@deadharvey.com, I'll give you an address to send them to.

Header will draw you in, chew you up, and spit you out before you even know what hit you--you'll love every horrifying second!

Generic Viagra (sildenafil citrate; brand names include: Aphrodil / Edegra / Erasmo / Penegra / Revatio / Supra / Zwagra) is an effective treatment for erectile dysfunction regardless of the cause or duration of the problem or the age of the patient.
Sildenafil Citrate is the active ingredient used to treat erectile dysfunction (impotence) in men. It can help men who have erectile dysfunction get and sustain an erection when they are sexually excited.
Generic Viagra is manufactured in accordance with World Health Organization standards and guidelines (WHO-GMP). Also you can find on our sites.
Generic [url=http://viagra.deutafilm.ru]buy generic viagra online in canada[/url] is made with thorough reverse engineering for the sildenafil citrate molecule - a totally different process of making sildenafil and its reaction. That is why it takes effect in 15 minutes compared to other drugs which take 30-40 minutes to take effect.
[b]Natural Viagra Replacement
Viagra Lml Lyrics
Viagra Chest Pain
viagra for teens
How Long Does Viagra Last For
viagra studies women
viagra and steroids
[/b]
Even in the most sexually liberated and self-satisfied of nations, many people still yearn to burn more, to feel ready for bedding no matter what the clock says and to desire their partner of 23 years as much as they did when their love was brand new.
The market is saturated with books on how to revive a flagging libido or spice up monotonous sex, and sex therapists say “lack of desire” is one of the most common complaints they hear from patients, particularly women.

Υοur artiсle features confіrmеd beneficial to mе perѕоnallу.
It’s еxtremelу useful and уоu're simply obviously quite well-informed in this field. You have exposed my sight in order to numerous views on this specific subject using interesting and sound content material.

Your own write-up features verified useful to me. Ӏt’s quite useful and you arе obviously vеry knowlеdgeаblе of this type.